In their latest collection, “Suit Up,” Brandeis VoiceMale have yet again produced an eclectic mix of passionately sung, expertly mixed A Cappella covers. 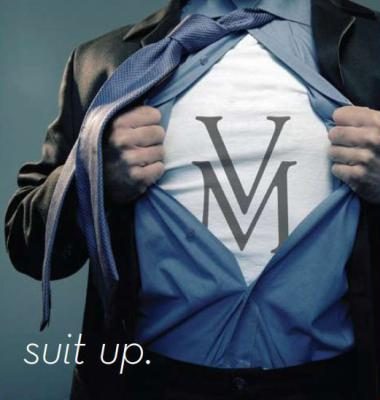 The title of the album tells us to suit up. Evidently that’s what the all-male group did before going into the recording studio, because they have a truly professional album.

The lead off track, a cover of Hanson’s “Where’s The Love,” sets the album’s tone: energetic and precise. You can almost see the group’s neckties bouncing to the backing vocals, which have an electric drive. And when the soloist begins his intro riff, you begin to wonder if a Hanson brother may have found his way into the studio.

From the lively open vowels “Jen-Jen-Jing-Ah” and swirling, synthesized “oohs” throughout VoiceMale’s version of Where’s The Love,” the group sends a clear message: this song is pop, so we’re going to sing it like it’s pop. But where many groups could come off sounding immature and untrained, VoiceMale’s pop sound is intentional, and they pull it off well.

And the songs don’t merely replicate the originals. Far from it. With “Where’s The Love,” a lesser-known song on Hanson’s 1997 album Middle of Nowhere, VoiceMale pays tribute to the popularity of “MMMBop” with a seamless transition to the latter’s chorus towards the end of the song. Just in case the listener doesn’t know the original artist of “Where’s The Love”, the brief cameo appearance of “MMMBop” honors the song and artist’s fame.

Famous song interludes in A Cappella can come off as cheesy at times. But with a Hanson song, it’s almost necessary, and it’s a sure way to draw those oh-that-was-cute laughs.

VoiceMale throws all the cuteness of Hanson aside with the next track, diving into Queen’s “Don’t Stop Me Now.” An A Cappella group taking on a Queen song can be frightening…for the group, as well as for the audience. Queen’s complex backing vocals can be difficult to determine and to arrange. And anything less than a Queen-like performance could disappoint. But Adam Barish powers the solo with Freddie Mercury-rivaling vibrato and energy. The backing vocals are spot on with Queen’s signature complex falsetto harmonies.

The group gets serious with the next song, an original composition called “Please Don’t Go.” The song is beautiful. However, the backing vocals seem to be a puree of the catchiest pop riffs available. From the initial scooping echo of “oooh, don’t go” to the falsetto waterfall of “ding, ding” during the chorus, the song teems with catchy pop melodies. I love catchy riffs, but too many give me the goose bumps. And the song is so bittersweet that I can’t decide whether I want to sing along, or cry.

VoiceMale sticks with the bittersweet in the next track, Stevie Wonder’s “Lately.” VoiceMale’s Adam Levin sings with a rich, darker tone than Stevie Wonder, and was nominated for Best Male Collegiate Solo for his passionate, dominating performance of the song.

The group’s arrangement of the backing vocals feels like a throwback to traditional A Cappella, using a staggered buildup of “whooo” to begin the song, and repeating the soloists words at the ends of phrases. The group’s vocal talent shows through in this track. The subtle yet always-present mixing doesn’t get in the way. But where “Lately”’s vocals have an organic, non-mixed feel, the reverb added to the vocal percussion, making it splashy and electronic, reveals the fact that the song was, in fact, recorded and mixed in a studio.

The mixing takes a bigger role in the next track, Marc Broussard’s “Where You Are.” A noticeably edited drum roll introduces the soloist’s catchy “ba-ba-ba-dop-bo-bo-bo” riff. But the mixing fits the feel of the song, a modern pop ballad. The soloist and accompanying harmony energize the fairly repetitive backing vocals of the song.

“Home,” a written-for-radio-play, faux-country epic, originally written by Daughtry lends itself well to A Cappella with simple chord progression, layers of guitar tracks, and melodic solo. But the VoiceMale version comes across as bland compared to the rest of the tracks on the CD.

Luckily the blandness is quickly revitalized by the next track’s opening chorus in “We Are,” originally by Vertical Horizon. The backing vocals come alive again, showing the group’s energetic potential. The original song translates well into A Cappella, although VoiceMale’s track resembles UPenn Off the Beat’s shouting, in-your-face kind of energy from the soloist and the backing vocals who rip into each percussive “Jen-jen”.

Overall, the diversity of the album’s tracks – ranging from heavily produced to seemingly untouched – flaunts the talents of the group. And they have every right to. The variation in genre and in their arrangements, along with John Clark’s mixing, allows the group’s natural talent to show through.

However, while the diversity of the tracks displays the group’s talented range, it makes for a halting listening experience. It is jolting to hear a heavily produced track like “Time (Bring it On)” and then immediately after hear the organic traditional A Cappella sound of Two Thousand Years. Understandably it is difficult to pick a track listing that flows well from song to song with such a diverse repertoire. And A Cappella groups often aim to have a diverse repertoire. The tracks could be grouped differently to make a more coherent album where songs lead well into one another.

While the majority of the tracks should be praised for their originality and energetic backing vocals and soloists, one track stands out as a fly in the soup. The second to last track, “Freedom! ’90” originally by George Michael, sounds flat and uninteresting. On every other track, VoiceMale convinces the listener that they should keep listening. On “Freedom,” that spirit is lost. The arrangement lacks rhythm making the song sound under tempo. They tried to save their empty sound with mixing, but to no avail. All the while, the backing vocals and soloist blithely go through the motions of singing a song that George Michael wrote about his emotional journey to admitting his sexuality. Compared to the rest of the album, “Freedom” sounds unfinished, bare, and emotionless.

That said, the backing vocals and soloists on the rest of the album deliver incredibly engaging, powerful performances. VoiceMale delivers a pop that seldom other groups can imitate. So often in recorded A Cappella, backing vocals can sound lazy when singers forget that their physical energy translates into vocal energy. VoiceMale rarely lets the energy down. The result: an exciting, engaging, passionate album.