The volume’s spirited imagination is strong enough to compensate for flaws in its translation. 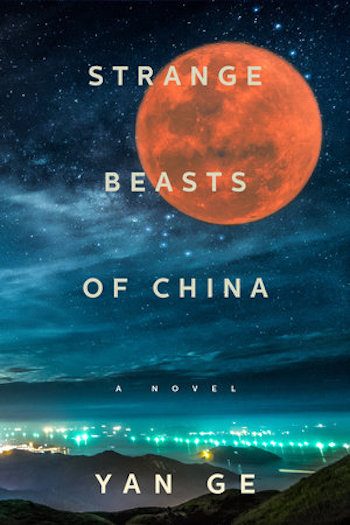 Strange Beasts of China (异兽志, lit. “Record of Strange Beasts”) is a thoroughly engaging work of fantasy fiction from Yan Ge (颜歌), a bilingual Sichuanese author with a PhD in comparative literature. Is this a collection of connected short stories or an episodic novel? Hard to tell. And does it matter? Each chapter tells the story of a supernatural creature who is living in Yong’an (永安), an imagined Chinese metropolis. The beasts are memorably charismatic, and that is good, because they have to overcome decisions made by translator Jeremy Tiang that undercut the book’s appeal for English-speaking readers. Still, the volume’s spirited imagination is strong enough to compensate for flaws in its translation.

Yan is a prolific author and her work has been well received in her home country. Strange Beasts of China did quite well domestically: it was first published serially in the literary magazine Youth Literature (青年文学) and later published as a collection. The protagonist, a washed-up cryptozoologist-turned-novelist, is the same in each tale, but the beast in each of the fables is the star, and they don’t carry over. There are nine beasts described in total, all of whom live or lived in the city of Yong’an: sorrowful beasts, joyous beasts, sacrificial beasts, impasse beasts, flourishing beasts. The author takes marvelous advantage of the originality of her conception: each beast is given distinctive characteristics, a mix of modern circumstances, the otherworldly, and the bizarre. For example, the sorrowful beasts live in a housing development that was originally built to be dormitories for workers at a cotton mill. The creatures are mild by nature: they “love cauliflower and mung beans, vanilla ice cream and tangerine pudding. They fear trains, bitter gourds and satellite TV.” Yan serves up plenty of charming whimsy, with touches of Borges-inspired wit. But the short narratives have their dark sides too. Yan’s inhuman beasties reminded me of the denizens of New Crobuzon from China Mieville’s Perdido Street Station, but painted with a gentler brush.

Unfortunately, English-speaking readers’ appreciation of Yan’s beasts is undercut by decisions made by the publisher and translator. No footnotes are provided to explain crucial Chinese cultural references. For example, there is a character named Zhong Liang, whose father’s name is Zhong Kui. Outside of a passing comment in the text that this name is “lofty,” there is no indication that the moniker is revelatory. Zhong Kui is a figure in Chinese religion; he is a renowned demon killer. In a book about mythic creatures, readers should be informed that a character is named after a beast-slayer. Other allusions are passed over in silence: in the first story, “Sorrowful Beasts,” two beasts are named Cloud and Rain. It would be useful for English speakers to know that “clouds and rain” (云雨) is a classical euphemism for sexual intercourse. A proper understanding of the story calls for understanding that sensual connection. An English-speaker with no background in Chinese literary culture would completely miss this resonance.

In addition, Tiang has smoothed out the challenging patches in the author’s prose style. The opening segment of each story features a brief description of the beast that will be highlighted. The section describes the creature’s physiology, its habits, and so on. I was vaguely reminded of passages in the Classic of Mountains and Seas (山海经), and I was pleased to discover that Yan acknowledges this link in an interview with the London Chinese Science Fiction Group. But, in that article, she notes that these sections were written in Classical Chinese in the original, which is the country’s equivalent of Latin. Depending on who you ask, these passages are written either in a highly antique register or in a completely different language! Tiang has harmonized these intros to fit with the tone of the rest of the book. And that approach raises a question about the dialogue — has that been steamrollered as well? Yan is known for her use of Sichuanese dialect; her writing has a strong local flavor. Granted, it would be very difficult to convey this idiosyncrasy in English, but it is vital that the translator at least make the attempt.

Finally, it is worth speculating about what Yan intended by writing this delightfully outlandish tome. Strange Beasts of China draws frequently on Buddhist images, but the stories never become doctrinaire. Yan may have wanted to introduce the idea of tiryagyoni-gati (chushengdao (畜生道) in Chinese) into her narrative, which is one of the six realms of existence. This realm encompasses animal life, and it is possible for human beings to perceive it: unlike the other four realms, gods (devas), asuras, hungry ghosts, and hell. In writing stories about these unusual beasts, the protagonist is gazing into a domain of samsara, recording the experiences of a separate reality. And, because compassion for all sensate life is a critical element of the four cardinal Buddhist virtues of brahma-vihara (四无量心) (kindness (maitrī), compassion (karuṇā), joy (pīti), and detachment (upekṣā)), the narrative’s Buddhist overtones may be tapping into the religion’s popularity in contemporary China.

Strange Beasts of China is a frustrating work in English. The fantasy is well worth reading, even given the translation’s shortcomings, but the version reminds me of a Chinese phrase, 隔靴抓痒, which means “to scratch an itch through your boot,” that is, to feel something faintly and being only partly satisfied. Melville House should be applauded for its decision to bring such a wonderful achievement in mainland fiction to the English-speaking market, but it would have been even better to have been given a more comprehensive inspection of the beasts on display.