What stands out is Olivia Rosenthal’s ability to make present and fully human an illness that is marked by absence and estrangement from humanity.

We’re Not Here to Disappear by Olivia Rosenthal, translated from the French by Béatrice Mousli. Otis Books / Seismicity Editions, 171 pp., $12.95. 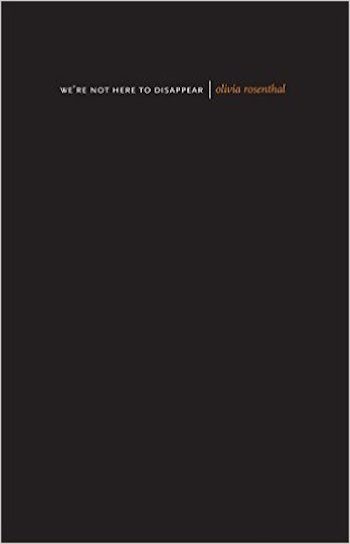 We’re Not Here to Disappear is the French playwright and novelist Olivia Rosenthal’s intricately composed novel based on Alzheimer’s disease. First published in French in 2007 and now available in Béatrice Mousli’s translation, the book announces from the very onset the stunning event around which the story will revolve:

On July 6, 2004, Monsieur T. stabbed his wife five times with a knife. He then left the marital home and sought refuge in the neighbors’ yard. That’s where the police found him. During the interrogation, when Monsieur T. was asked why he did such a thing, he was unable to answer. He didn’t seem to understand the charges brought against him and didn’t remember attempting to kill his wife.

Monsieur T. indeed has Alzheimer’s, has tried to kill his wife, cannot remember having done so, and the novelist thereafter uses diverse vantage points to cast light on this spontaneous act and its immediate disappearance into the oblivion of a mind.

The narrative structure is both collage-like and spiral-like: no linear plot is sketched out and, with subject matter stemming from Alzheimer’s, how could it be? After a first page succinctly devoted to the murder attempt and the fruitless police interrogation, the second page introduces Doctor Alois Alzheimer and gives a succinct summary of his life, and then the third page defines the disease: “This dementia, whose etiology isn’t yet known, is associated with specific histological lesions: the presence of senile plaques, neurofibrillary degeneration and cortical atrophy.” The fourth page offers a paragraph consisting of Monsieur T.’s (or perhaps an anonymous Alzheimer’s-stricken patient’s) thoughts in stream-of-consciousness form, whereas the fifth page reveals Rosenthal’s motivations for writing her novel:

The goal of this book is for me to get used to the idea that I could one day be suffering from A.’s disease, or that, even more terrible, the person with whom I live could suffer from it. But as I write this sentence, I refuse to admit such an eventuality and my whole mind rebels against the work I’m embarking on, which consists in imagining the worse.

The story begins its fascinating spiral when Rosenthal returns to these disparate narrative elements, one after another, and fills them out. For example, in regard to her own literary goals, she expatiates on the theme of writers’ superstitions, notably on the possibility that “horrible stories, even if they’re totally made up, [could catch] up with reality and that, by who knows what magic trick, what [writers] thought was purely a product of their imagination actually happens in their very lives.” And as she returns to such concerns, which engage her responsibility as a novelist with respect to reality, her focus becomes pointedly personal. Moreover, the spiraling movement of the storyline reflects how our own minds attempt to cast their nets wide in order to penetrate deeper into a problem that puzzles us — to recover facts, viewpoints, thoughts, emotions, and memories. This recovering process or, rather, its impossibility, lies, of course, at the very heart of the affliction of Alzheimer’s.

As the book progresses, we also learn more about the stabbing and what led up to it; more as well about what subsequently happened not only to Monsieur T. but also to Madame T.; and then we meet her closest relatives, who come to visit her in the hospital. We also are given more information about Dr. Alzheimer’s life and research, about how he called into question the received medical notion, in his day, that “dementia in older patients [was] linked to the normal wear of time.”

Rosenthal recounts how Alzheimer and his colleagues Franz Nissl and Emil Kraepelin were all doing brain research and how ultimately Alzheimer’s name, though not through his own scheming, came to be associated with the psychiatric phenomena that he was studying in a patient named Auguste D. Rosenthal explains that “Monsieur Alzheimer didn’t really appreciate it when, by chance, he discovered that professor Emil Kraepelin had officially associated his name with a senile degeneration in volume 1 of his Treaty of Psychiatry”:

He was embarrassed, stressed, he seemed even irritated. […] He well understands, on discovering the news, that his colleague’s intentions aren’t as noble as it might seem and that, most likely, the decision made in the secrecy of his office and intended to honor him hides a muted treachery.

As is revealed in a later passage, Alzheimer was Kraepelin’s subordinate at the clinic where they worked. In order to keep his time free for his own research, Kraepelin turned over the practical management of the clinic to Alzheimer, whose discreet protests were to no avail. Kraepelin, recalls Rosenthal, was “able to publish one after the other the three volumes of his treatise on psychiatry and thus became one of the most famous psychiatrists of his time.”

Mini-stories like this are woven into Rosenthal’s multifaceted narrative, as are brief dialogues between Monsieur T. and others, various short poems, medical facts, and clinical reports about the real Monsieur T. In the Acknowledgments, Rosenthal defines We’re Not Here to Disappear as a work of fiction, while adding that it “reinvents and imagines in part the life of certain real people.” She has clearly done careful research, been informed by qualified specialists, and closely observed patients. She also thanks Monsieur T.’s family for allowing her to weave variations on his particular case.

The novel exemplifies a kind of writing found in other French novelists born in the 1960s and 1970s. (Rosenthal was born in 1965.) Instead of employing an aesthetic of stylistic smoothness, the writer eschews the blender, as it were, and seeks to concoct a heady stew in which all the ingredients remain visible and chewy.

What stands out is Rosenthal’s ability to make once again present and fully human an illness that is marked by absence and estrangement from humanity. She intuits and invents plausible entryways into the minds of those who are stricken with the degenerative disease. One of her most effective techniques is the use of thought experiments. Even as she spirals time and again back to the same narrative elements, enhancing them in the process, a thought experiment can be formulated and, a few pages later, intriguingly reformulated:

Do an exercise.
Imagine you can erase from memory someone close to you, as well as all the events related to this person and in which you are involved.
Who would you erase?
On whom would you exert this wonderful power?

Imagine now that you couldn’t not erase someone close to you, that you had to do it.
Who would you erase?

Yet even more compelling than these sobering challenges to our ability to empathize, to understand, to imagine ourselves as suffering from Alzheimer’s, are Rosenthal’s sudden personal asides. They often deal with her sister’s suicide, which has created another kind of permanent absence—an absence with which she must cope. “I wonder what my life would have been,” she asks several times in increasingly precise ways, “if my sister hadn’t thrown herself out the window.” She also probes her family background in pre-WW II Germany, notably evoking her great-grandfather’s leather goods shop in Frankfurt, where her father was also born and where, as it turns out, Alois Alzheimer was buried.

Frankfurt, which she has never visited and in fact refuses to visit, also symbolizes an incurable absence. Although she does not specifically name the disaster, it is implicitly clear that a particularly terrible, awesome absence is at stake: the extermination of the Jews of Europe by the Nazis. And Rosenthal’s allusions are conspicuously linked to the “snatches” that she knows of the “partial story” of her great-grandfather and to her “fighting with the truncated idea [she has] of German cities, of German names, of the German language, and of Doctor Alzheimer.”

Considering the possibility of traveling to Frankfurt to meditate on such matters over Alzheimer’s grave, she concludes: “It would be a roundabout way of going back to my origins even though to my knowledge, none of my family members were buried in this city, nor in any other for that matter.” It is by way of this personal yet also universal, tragic, historical, and ever fully present sense that Rosenthal’s novel, though based on Alzheimer’s, encompasses themes that are greater than the ravages of a specific devastating illness. Through fiction, she is pondering our being in the world, our being with others, our perceptions of the presence of others, and the all-too-real threat of outside causes arriving to destroy and create incurable absences.

John Taylor’s translation of Pierre Chappuis’s poetry, Like Bits of Wind, has just appeared at Seagull Books. He has also recently translated books by José-Flore Tappy, Georges Perros, and Philippe Jaccottet. He is also the author of the three-volume essay collection Paths to Contemporary French Literature (Transaction Publishers). His most recent book of short prose is If Night is Falling (Bitter Oleander Press). John Taylor’s website.