At his best — and there are indeed moments of that here — Keb’ Mo’ is a genre-bender who brings new listeners to blues, folk, and smooth soul music. 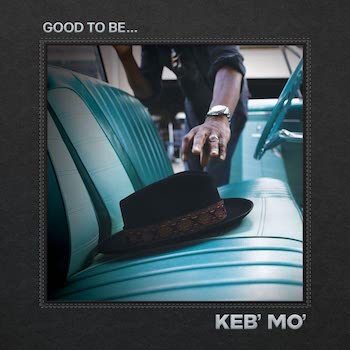 Keb’ Mo’ (he puts Kevin Moore on his tax returns) reminds me a bit of Al Jarreau. Not that they have much of anything in common musically, but Jarreau was one of those artists who had serious jazz chops and credentials who kept putting out slick, commercial, cheerful pop music. I always looked forward to a new album from Jarreau, thinking “maybe this time he’ll give us what we know he can do,” and I always came away liking the album OK but also thinking, “Oh well, maybe next time.” Mo’ is similar for the blues. He has the chops and the credentials, but he keeps giving us friendly, processed music about how peachy life is when everyone just loves one another. He leaves me wanting … well, Mo’.

Mo’s latest is Good to Be… which is in line with his recent work. At his best — and there are indeed moments of that here — Mo’ is a genre-bender who brings new listeners to blues, folk, and smooth soul music. Like his friend and mentor Taj Mahal (their duo recording, 2017’s TajMo, is essential listening for fans of either), Mo’ is at home mixing up country, folk, and pop with traditional blues into music that is hard to imagine anyone not liking at least to some degree. You’ll have to decide for yourself if you love it. Just don’t expect Mo’ to give you a full, satisfying serving of any one particular style.

Many of the elements are here for a killer album that doesn’t quite materialize. Mo’ has three of the best bass players in the world (Marcus Miller, Victor Wooten, and Nathan East), but none of them are given any challenging structures or a note of solo space. The guest soloists (blues star Christone “Kingfish” Ingram, Hootie and the Blowfish’s Darius Rucker, and Wicked’s Kristin Chenoweth) are tightly confined to short licks or background vocals on the choruses. Producer Vince Gill brings out the commercial country influences here and there, but there’s no consistent house style on the album. Imagine an album where Vince Gill gets into it with Marcus Miller, Kingfish Ingram, and Darius Rucker! This isn’t that album.

Instead of traditional blues about having the blues, Mo’ sings sunny songs about how great life is. (He’s very good at it, if you need a break from Howlin’ Wolf.) The first three tracks, “Good to Be (Home Again),” “So Easy,” and “Sunny and Warm” are all at home with being easy, sunny, and warm. They’re bouncy, almost quaint songs about feelin’ alright, having a picnic on the 4th of July, and how easy it is to say “I love you.” The blues organ is way back in the mix and well-behaved, and there are synth strings and smooth jazz guitar. They’re fine, but you probably won’t think much about them when they’re over.

“Good Strong Woman” has the strongest country influence, complete with two-beat bass, slide steel guitar, and lyrics about a good strong woman who’ll fill you up when you’re out of gas. Guest Darius Rucker is held back and never lets go with his heart-on-the sleeve roar, but the two have complementary voices and make this a worthy single. Even better is “The Medicine Man” with the welcome addition of banjo, harmonica, and fiddle courtesy of the Old Crow Medicine Show. Firmly back on Taj Mahal’s turf, the bluegrass/gospel/folk groove brings out much more heart and authenticity from Mo’ than the slicker country/pop style. It’s easily the best cut on the album.

There are too many songs that are just passable. “’62 Chevy” is a musical parallel to having ribs at Applebee’s. “Like Love” is a forgettable country/pop confection with just a bit of Hammond organ back there to remind you of what it could have been, then it’s drowned out by the saccharine strings. “So Good to Me” has a Bruce Hornsby feel in the brightly recorded rolling piano and metronomic rim shots (it reminds you that Mo’ and Hornsby have a similar vocal range and aesthetic). Instead of a blues song about your woman doing you wrong, this one is a conflict-free song about a good woman doing you right. But as Leo Tolstoy said, every happy family is the same, and songs about them seem to be the same too.

The real dud is Bill Withers’s “Lean on Me.” The good-guy lyrics and pop-friendly soul park this one right in Mo’s wheelhouse, but if you’re going to cover a Withers song, you’ve set a very high bar. This one misses the handclaps from the original, which added the punch. Mo’ turns it into an easy shuffle, and he replaces the gospel groove with an Americana mainstream radio feel. Mo’ seems to be phoning it in, much unlike Withers, who always sang like he meant it.

“All Dressed Up” is much better, and we finally get some blues phrasing and a few flat 3s and 5s to cloud up all those sunny skies. Mo’ confesses for a change that he knows “How it feels/When the woman you love puts you down.” There are even some tasty trombone and muted trumpet blues fills. Mo’ takes a guitar solo, still staying well inside the guard rails. It’s a huge wasted opportunity using the commanding blues wunderkind Kingfish Ingram on the ballad “Marvelous to Me,” where he only gets a few bars, instead of on this track.

“Marvelous to Me” is one of a pair of political songs. It’s optimistic about an American future without being too hokey or naïve. The lyrics aren’t exactly Langston Hughes: the singer is aware that it’s “cold, gloomy, and gray” now, but the clouds will pass, and “If Martin Luther was here today,/Tell me, what would he have to say?/I still have a dream, and the future looks/Marvelous to me.” Similarly, “Louder” is about young people wanting a change. It’s hardly likely to become an anthem in the streets, but it has a pulse and something resembling an edge (if only in the chorus). “It’s gonna get crazy,” Mo’ tells us, but he doesn’t show much of it in this music.

“Quiet Moments” is Mo’ at his best. It’s a slow ballad featuring Broadway singer Kristin Chenoweth singing backup on the chorus. The rich strings are welcome here, not an imposition. Mo’s song isn’t quite pop or blues or soul or country, but isn’t not any of those things either. It’s a simple statement of Mo’s uncomplicated artistic vision of the quiet moments in life being most worthwhile. I’m not quite sure about the pairing of these vocalists — Chenoweth’s clear high voice and tight vibrato is exactly the opposite of Mo’s. (You can’t get much whiter than hiring Glinda the Good Witch herself.) They’re no Robert Palmer/Alison Krauss duo for the ages, but their mashup of musical worlds adds a warm glow to this sweet song that ends the album.

Keb’ Mo’ has built his own niche somewhere between Louis Armstrong’s “It’s a Wonderful World” and Taj Mahal. It’s a contented, welcoming place to be, and there’s freedom to grow there. It’s also not a very complex, invigorating, or ultimately challenging place to be, but for 47:56 of our lives, it can probably do us all some good.