What motivated me to read this book? Not for a special love of Midnight Cowboy, a movie which I like but isn’t ultimately important to me. It was to learn about James Leo Herlihy, who has interested me since I was an adolescent. 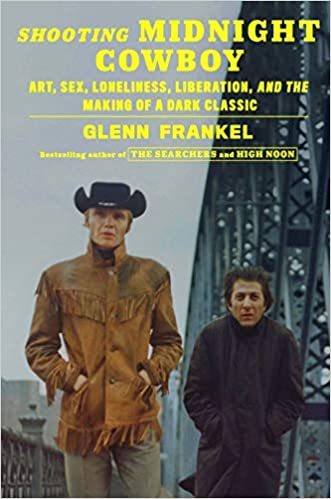 “The ‘biography’ of a film might be my favorite genre,” writes film critic, Molly Haskell, and that certainly is a popular book form these days: recently The Big Goodbye, Sam Wasson’s well-received study of the making of Chinatown. The person most responsible for making this emerging literary form a respected one is Glenn Frankel, author of three assiduously researched and very well written books, each on an important American movie. I am especially fond of The Searchers: The Making of an American Classic, brilliant on the historical context of John Ford’s 1956 western masterpiece. Shooting Midnight Cowboy is a little less monumental, but Frankel’s newest work is still a very good read.

What is most consistent in the “biography”-of-a-film genre is the smashing of the auteur theory. Each book has as its mission describing how a film comes together from many sources, many people, not just the vision of the director. Such is certainly true of Shooting Midnight Cowboy. Significant credit does go the British filmmaker John Schlesinger for his understanding of the New York subterranean milieu of the story, including the gay world. But Frankel also gives attention to the enterprising producer, Jerome Hellman, who put an extremely demanding film together, and the skilled cinematographer, Adam Holender, for the movie’s properly gritty, naturalistic look, and, of course, the lead actors, Dustin Hoffman and John Voight, for their runaway astounding performances. And how much would Midnight Cowboy have worked on screen without the touching, humanist screenplay of Waldo Salt, who succeeded where others like playwright Jack Gelber had failed? And let’s not forget for a moment the source and inspiration for it all, James Leo Herlihy’s excellent novel.

Even here, Frankel finds more people to credit. It was Michael Childers, Schlesinger’s young boyfriend, who discovered the soundtrack song that tells the story of the movie so perfectly: Fred Neil’s “Everybody’s Talkin’” as interpreted by Harry Nilsson. There are the clever production designer who did Ratso Rizzo’s derelict apartment and the enterprising costumer who bought appropriately down-and-out clothes from outside vendors on 8th Avenue. Finally, there is Marion Dougherty, who Frankel considers a true hero of the movie for her inspired New York casting, from the nonpareil leads to the extras walking the dank Manhattan streets or appearing in an eight-minute party scene of Warholian excess.

If anyone was treated vilely in the making of Midnight Cowboy, it’s Dougherty, Frankel asserts. She insisted on a much-deserved single card on the rolling credits, and the cruel response by Hellman was to cut her out completely. The second most screwed-over? Frankel thinks it was Voight, who, he feels, gives the film’s greatest performance. While Schlesinger and Hellman became extremely rich because they owned a percentage of the film, they didn’t share any of their millions with Voight, who got a straight $18,000 for his sublime acting.

How does Frankel organize his tale? For the first part of his book, he jumps chapter to chapter between the pre–Midnight Cowboy biographies of Schlesinger and Herlihy. We follow the filmmaker directing his first films and Herlihy writing his first novels. Schlesinger came from a wealthy, educated Jewish family in London, Herlihy from German and Irish blue-collar roots in Detroit. What they had in common, besides their artistry, was that both were actively, openly gay in private and closeted in public. And both personalities ran mellow and heated, often personable and engaging, sometimes explosive and vengeful. Midnight Cowboy screenwriter Salt adored working with Schlesinger. Brenda Vaccaro, an actress in the film, said, “I didn’t like his fucking attitude. He could be so bitchy sometimes.” Herlihy was well aware of his volatile mood swings, characterizing himself as a manic-depressive.

One would have thought that Schlesinger would have great pride in being located among the “Free Cinema” filmmakers of Britain’s early 1960s. Certainly his working-class films in black-and-white, A Kind of Loving and Billy Liar, have much similarity to the works of Tony Richardson, Karel Reisz, and Lindsay Anderson. However, Schlesinger would have nothing to do with his fellow filmmakers; in fact, he loathed at least one of the group, Anderson. He saw his oeuvre connected more to the French New Wave, and he was far friendlier with some of the English actors he worked with like Julie Christie and Alan Bates than with other native directors.

It would have been easy for Schlesinger to be part of the British cultural scene. He chose to be a loner. But Herlihy, coming from Michigan anonymity, had his work cut out to be noticed by anyone of stature in America. However, when he briefly attended Black Mountain College, he became friends for life with Anais Nin, a guest lecturer there. He got to know Tallulah Bankhead and then Edward Albee and played the lead part of Jerry in a pre–New York rendition of The Zoo Story. And another close friend was Tennessee Williams, with whom he hung out regularly when they both lived in Key West. Along with Williams, Albee, and William Inge, Herlihy was one of a group of successful gay playwrights with the New York production of his Blue Denim. He was also amazingly lucky to have three movies made of his work: Blue Denim from his play, and All Fall Down and Midnight Cowboy from his novels.

The middle section of Frankel’s book is about the actual filming of Midnight Cowboy. It’s only fairly interesting. Nothing that momentous happened while the movie was being made. Schlesinger said, “It wasn’t a very happy film. I hated a lot of the technicians on the film.” Much of his crew were not only homophobic but on the clock, not caring an iota about the delicate story. But Schlesinger got on along fine with Hoffman and Voight, and they also clicked as a team, though each wanted to be better than the other. “We really did like each other,” Hoffman said, “and at times we were very competitive.” Hoffman’s only complaint, a prima donna one, was that his character, Ratso, doesn’t appear in the film for much of the first act. It’s all about Voight’s Joe Buck, growing up in Texas and slowly getting to New York. Just as in Herlihy’s novel.

What do we learn new in Frankel? Trivial things like the true circumstances around which Hoffman improvised the movie’s most quoted line, “I’m walking here. I’m walking here.” That MGM was interested in buying the book for Elvis, taking out the touchy gay hustler parts, and making it a Joe Buck musical. That quite a few of America’s most esteemed critics didn’t like the movie. Pauline Kael: “The satire … cheapens the story and gives it a veneer of almost hysterical cleverness.” Roger Ebert: “an offensively trendy, gimmick-riden, tarted-up, vulgar exercise.”

The most engaging find is that Frankel uncovered the real story behind the film’s notorious X rating, which has always been blamed on the retrograde Production Code. In actuality, United Artists, which made the film, asked for the rating because executives at the top were worried that kids would see it and be exposed to the homosexual themes. Thus the only X-rated movie ever to get an Oscar for Best Picture.

What motivated me to read this book? Not for a special love of Midnight Cowboy, a movie which I like but isn’t ultimately important to me. It was to learn about James Leo Herlihy, someone who has interested me since, as an adolescent, I read and really liked his wildly titled fiction collection, The Sleep of Baby Filbertson and Other Stories. In the first part of Frankel’s book, the facts about Herlihy are there but he somehow remains remote. It’s in the final section, post–Midnight Cowboy, where I finally felt Herlihy palpably on the page, when he became rich from owning part of the financially successful film at the same time that his writing talents were diminishing. His final years are a whirl of sex and drugs and hanging out with young hippies and traveling across American and leaving Key West for Los Angeles and lunch with George Cukor and a year-long affair with Rock Hudson. And, finally, getting AIDS.

On October 20, 1993, Herlihy decided to end it all with sleeping pills, and he left one amazing Beatnik suicide note. “I feel great, like: This is the Life! And this is the death! And WHOOPIE! The milkie liquid will not be delicious, but it won’t be bad. I’ve tasted a spoonful. I can handle it easy. And now—words are getting in the way. Love, Jamie.”

His writing ability had returned at the very very end. And he was using the first name he decided later in life he felt most comfortable with. Not James or Jim. I’m happy to say that it’s the same with an autographed copy of Baby Filberston I was thrilled to buy off the Internet. Here is the inscription: “Old stories for new friends, Marion and Myron, from Jamie Herlihy.”