You are here: Home / Books / Book Review: “Roundabout of Death” — No Safe Havens

The strength of Roundabout of Death lies in its credibility, and in a specificity that defies detail. 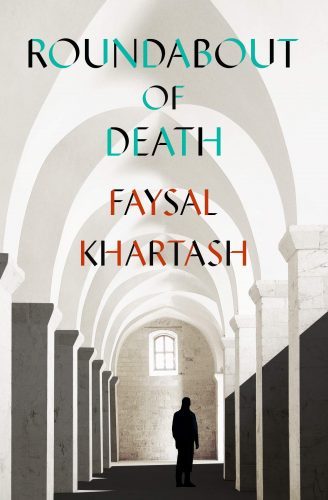 The critic Hugh Kenner once supplied a context to frame Samuel Beckett’s Waiting for Godot — as a kind of sequel to Bertolt Brecht’s Mother Courage. He postulated a war-torn, shelled European landscape at the end of a World War barely peopled with refugees and operatives speaking, or misunderstanding, life-and-death codes. In this reading, Vladimir and Estragon can be seen as agents trying to establish communication with a necessary contact who may or may not be still alive. It all makes perfect logical sense, and I couldn’t help thinking about that context when reading Faysal Khartash’s short novel Roundabout of Death. It shares the same atmosphere of ill-understood futility. Any “meaning” is in the context, not in the story.

Without context, the drift in Roundabout of Death floats the reader along for 150 pages among devastated people from one devastated café to another in a devastated city in 2012, until the protagonist makes an exploratory trip into ISIS-controlled territory and returns. Weighing on his mind are threats to his family and how he can possibly mitigate if not actually escape them. His son just barely makes it to Turkey after arrest and torture; the narrator’s mother lives across town in a destination that can only be reached by a hellish commute:

I no longer go to my mother’s house on Fridays. We agreed that I would go see her another day instead because we have trouble on Friday: demonstrations and car bombings are always taking place on Friday, also there are ID checks for every citizen, detainments and cell phone confiscations; no matter what, they, take him to the car, by which they mean a paddy wagon with bars on the windows, like a prison cell, which quickly fills up with people.

But there seems to be nowhere to go, except into a brief flashback to long-ago Paris.

Max Weiss, the translator from Arabic, tries to provide the necessary context for what he says in his lengthy introduction is  “the rampant, and, one might say, subcutaneous feeling of anomie and uncertainty that characterizes war-torn Aleppo.” But I reached out also to a Syrian friend now living in Beirut, who wrote back, “Faysal Khartash is known for his affinity to Aleppo. He brings to bear a personal perspective, not to be discounted, on the ugly war that persists in Syria. His works are basically worthwhile and are considered as such. His persistent stay in Aleppo through the events and afterwards adds to his credibility.”

Khartash refrains from drawing conclusions: Roundabout of Death is all description, a narrative of process. The translation carries this level tone. There is a flatness, a prosaic plod — witness the punctuation in the sentences quoted above — which may or may not reflect the Arabic language of the original. At a couple of points, my faith in the translator wavers:

My mind drifted elsewhere as I thought about my son who had left, I had no idea where to.
“How can you space out in a moment like this?” my wife asked.

Space out feels wrong here — not in meaning, but as a phrase in the mouth of this woman. Elsewhere, “Islamic State fighters never quibbled about prices [in the marketplace.]” Quibbled doesn’t sound right for marketplace bargaining. Is the choice of the register of this word in Weiss’s English or Khartash’s original Arabic?

The strength of Roundabout of Death lies in its credibility, and in a specificity that defies detail. The BBC has declared the war in Syria to be the most documented in history, but no one can generalize from records of documentation alone. What we are left with in this novel is the geography of Aleppo, the name of the city echoing through a paragraph earlier in this review, as it does in the book, as much a character as Dublin is for James Joyce, but with less concrete detail because even the streets have been violently eradicated. The beginning of the book is rich with people and events — “Miss Beauties,” an exploding grenade — but these fade away into the weary drudgery of survival.

In her introduction to her anthology Against Forgetting: Twentieth-Century Poetry of Witness, Carolyn Forché calls for “a third term, one that can describe the space between the state and the supposedly safe havens of the personal. Let us call this space ‘the social.’” It is this space that Roundabout of Death inhabits — without safe havens.