A.G. Cook’s undeniable talent shines through in spots, but the record suggests that the celebrated producer has a ways to go before stepping into his own as a solo artist. 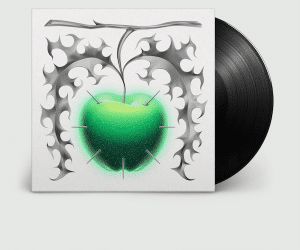 As the head of the PC music record label, producer A.G. Cook has been a prolific force behind some of the most forward-thinking music of the 2010s. His blend of abrasive digital noise and a traditional pop sensibility was ever-present over the past decade, from underground acts like Hannah Diamond to full on superstars such as Charli XCX. Now, in 2020, he’s trying to make a name for himself as a pop star.

Apple, Cook’s second album in as many months, comes hot on the heels of his gargantuan, 7-disc debut 7G. That recording came off as an extensive series of studio exercises/experiments, each of the discs dedicated to a different sound or idea. Apple, on the other hand, is a more focused and slimmed down version of the studio maven’s vision. But this solo effort is marred by an uncharacteristically disjointed sonic landscape and inconsistent vocal performances. His undeniable talent shines through in spots, but the record suggests Cook has a ways to go before stepping into his own as a solo artist.

On Apple, A.G. Cook traverses familiar territory, darting between noisy deconstructed club bangers and eclectic pop experimentation. “Oh Yeah,” the opener, takes soft melancholia and feeds it through digital distortion; acoustic licks are warped by metallic filters, while Cook’s voice is tinged with auto-tune. “Let me read your mind/For the final time,” he sings, evoking the final moments in a relationship. Tenderness is twisted through electronica, which adds a hint of alienation. Quieter tunes are balanced out by songs like “Airhead,” which moves from formless cacophony into a frenetic explosion of bubblegum bass. Both tracks illustrate a key weapon in Cook’s arsenal: a skillful mashing together of disparate ideas. Soft pop meets disaffecting electronica, danceable music mingles with pure abrasion.

This approach leads to wildly inconsistent results across the album. Cook has proved himself to be a master of deconstructed production; musical building blocks are teased out, isolated, and then arranged in succession. On Apple, he stretches this approach to the point that it is no longer enjoyable. “Animals,” a cover of experimental producer Oneohtrix Point Never, is perhaps the worst offender. The jangling synth line that opens the song is disappointingly rudimentary, and the jumbled guitars that follow fail to build on its simplicity. This track also contains the first of Cook’s underwhelming vocal performances. His high-pitched tones and poorly chosen vocal filter generate a dissonant combination that borders on the unlistenable. It’s an uncharacteristically clumsy step for a producer as seasoned as Cook that persists throughout the disc.

Cook’s experimentation is as responsible for Apple’s faults as it is for its successes. Some of his efforts to innovate wind up sounding disjointed and fragmented, especially on the slower numbers. The languid picking that opens “Haunted” meshes well with the formless auto-tuned vocals, but the aimless shift to synths throws the tune off track. It’s a jumble of fragments rather than a song. Elsewhere, “Beautiful Superstar” is held back by the same lethargy. It’s another acoustic-electronic mishmash of a ballad in the vein of “Oh Yeah,” but recycling the idea does the track no favors. Cook is adventurous to be sure, but his daring lacks any sort of direction or forward momentum.

Tellingly, Apple improves immensely when Cook injects more energy into his music. “Darkness” is far from the producer’s most original track, but it’s obviously put together with more care than the others. A soft dancehall beat is buried under layers of synths as Cook sings “‘Cause baby I know that you love life/I know that we’re still trying.” Affection drives this tune forward, offset by the muffled club background. “Jumper” follows, and it contains similar verve. Cook’s pleas of “Live your life before it’s over” are accompanied by driving acoustic strumming and cavernous drums. It has all the space and size of a true ballad.

The instrumental tracks are the album’s most dependably successful achievement. Cook is a DJ set veteran, and his experience and creativity consistently shine through on tracks like “Xxoplex.” Here, a percussive cadence is transposed into a delightfully abrasive synth line. New elements are introduced at a breakneck pace: bouncing bass, a drumline-esque snare cadence, and vocal samples that oscillate between the operatic and helium-filled. This is Cook at his most harebrained — and captivating. “Stargon,” meanwhile, is Apple’s most linear tune. Glitzy synths intertwine and then build to a gradual crescendo, capped off by an explosion of distorted drums. On these tracks, Cook’s music-making talent is on full display.

Across Apple, A.G. Cook consistently shows that he’s still struggling to don the mantle of a solo artist. His talent as a producer is undeniable, but it is undercut throughout the album by his inexperience as a vocalist and songwriter. His bold devotion to the juxtaposition of the chaotic and the spare is compelling  — but it must be properly focused. If not, it becomes a mess. Apple suggests what happens when Cook’s sound goes stale.