In Limbo, Aminé’s become more reflective, yet he never loses sight of his boisterous mischievousness. 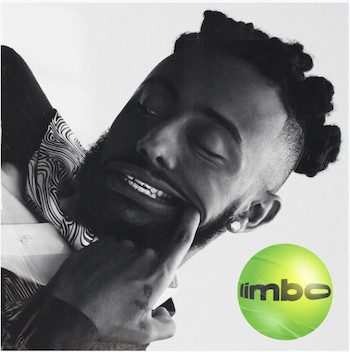 Aminé burst onto the scene in 2016, his enormous promise tempered by glaring annoyances. The Portland MC told a dozen jokes per minute, but they misfired as often as they landed. The result was a surfeit of clever quips and self-indulgent wordplay. It didn’t help that the guy was everywhere; attending even one college party that year was enough to tattoo the hook of “Caroline,” the rapper’s breakout single, into your skull. Still, the rapper had undeniable strengths: razor wit, encyclopedic pop culture knowledge, and just enough kook to set his voice apart. These are the qualities that power his new LP Limbo, aided by some newfound maturity.

Aminé’s unabashed reveling in nerdy hip-hop fandom has been on of his strengths, and Limbo continues that trend. The rapper pulls from myriad  moments of musical history, integrating them into a pleasurably varied sonic landscape. Listen to the gentle soul keys that add to the sweetness of “Mama” or the self-aware quotations of “homie we major” on “Pressure in my Palms” — Kanye West’s influences are unmistakable. Elsewhere, “Shimmy” pays a direct homage to the late Ol’ Dirty Bastard; the track is littered with grainy samples of the Staten Island icon. Over eerie backing vocals, Aminé spits “I’m bigger than Texas/Me and God text message,” squarely modernizing ODB’s manic braggadocio. These spots reflect a deep, knowledgeable rap library that Aminé dips into with impressive ease.

Still, Limbo isn’t content to trade purely on nostalgia. Aminé updates his references with modern sounds and his own jokester bars. “Woodlawn” is a lighthearted “come up” song, built on a trap beat made breezy through the highlighted addition of a flute. “Came a long way from that Woodlawn park/Now young Aminé pushing push to start,” he raps, exuding celebratory confidence over the hum of his new Ferrari. Elsewhere, “Riri” provides some downcast vibes as Aminé croons over a breakup; “You love Rihanna but you ain’t a savage/Don’t act like you perfect you know that we both got some baggage.” The bassy, nocturnal instrumental evokes smoked out, LED lit bedrooms and loneliness.

Of course, Aminé’s referential quips wouldn’t work so well on Limbo without the rapper introducing some thoughtful issues. The bravado of “Woodlawn” is briefly captivating, but his luxury car-driven confidence is deepened at the close of “Fetus,” where the rapper finds himself eating grapefruit, and wondering “Why is this nicer than my Ferrari?” The record oscillates between two poles: reflective vs boisterous, playful vs serious. Sobering nuances mitigate the album’s lighter moments.

Limbo‘s weak spells arrive during its back leg, when it loses some of the variety that initially drove it forward. The closer, “My Reality,” winds up being its weakest track. Kanye’s influence finally becomes overbearing; the chopped soul instrumental, coupled with Aminé’s delivery, could have been ripped straight from The College Dropout. The autotuned hook makes the homage painfully obvious. “Easy,” a treacly neo-soul sex jam (which softens the impact of the breakup blues registered in the preceding “Riri”) suffers from a similar lack of individuality. Summer Walker’s relaxed vocals can’t obscure the fact that Aminé’s voice isn’t comfortable in this setting. These are minor blemishes that, in their way, are also encouraging — he has room to grow.

Limbo is also marked by a new found world-weariness; there’s a never heard before fatalism here. Aminé ‘s still wisecracking, but his jokes have become somewhat sour. “Maybe I’m the one who need the Lord to save me/The last time I went to church was in the fuckin’ eighties,” he raps on “Burden.” It’s sobering and funny, evidence of the faintest twinge of Catholic guilt. Later, he raps “It’s all fun and games ‘till it happens, like a Based God Curse,” an allusion to an obscure Lil B beef track. Sometimes, Aminé’s issues are best addressed by his wry wit.

In truth, there are moments on Limbo when the Portland rapper embraces a deep darkness. “Kobe,” the album’s longest skit, sees Aminé framing the death of the basketball icon around his own transition into adulthood; “Being a young person died with Kobe.” This isn’t the last time Kobe’s brought up; “Fetus” gives us the featured Injury Reserve rap “Hope I can be half the father that my mama was/Yeah, hope I can be half the father that the Mamba was.” This is a highlight on one of Limbo’s more despairing tracks. Aminé has to deal with fatherhood, but keeps coming back to the same question: How can I bring a child into this fucked-up world? “A shooter every month and they pretend it’s daffodils/My son’ll probably see that fire before a fire drill.” Aminé is terrified of what it means to be a child in the present day — and it’s hard to argue with him.

Still, Aminé’s maturity can’t smother an underlying playfulness. Look no further than how his lyrics impishly twist mentions of pop culture and childhood memories. His world is defined by everything from the Jackass to obscure NBA lore — and these disparate images are often evoked in the same breath. But these allusions are also sharpened — to the point of being weaponized — through his dizzying wordplay. On “Pressure In My Palms,” Aminé growls “If Steve Harvey say my name wrong, I’ll catch a sentencing/Like Malice at the Palace or Winona up at Sak’s Fifth.” It’s a roundabout way of saying “do not fuck with me,” but there are so many layers that it takes multiple listens to fully appreciate his aggression.

Limbo is an exciting balancing act. Aminé dispenses with a number of his weaknesses while making the most of his strengths. He’s become more reflective, yet he never loses sight of his boisterous mischievousness. The rapper comes face to face with a broken world, but he has a good time nonetheless by pulling off an admirable artistic trick: infusing a pop sensibility into introspective, socially conscious rap.