Evaluations of a smorgasbord of Beethoven symphony recordings. One of the odd facts of Beethoven performance practice is that his music isn’t usually portrayed too creatively in any sort of context. The label Harmonia mundi’s been challenging that approach of late, though: a release from earlier this year paired the Pastoral Symphony with Justin Heinrich Knecht’s Le Portrait musical de la Nature ou Grande Simphonie. Now come the first two Beethoven symphonies alternating with pair of works in the genre by Carl Philipp Emanuel Bach featuring the Akademie für Alte Music Berlin.

The symphonies by CPE are one in F major (written in the mid-1750s) and G major (from the mid-1770s). Both are concise in structure and duration, following the tripartite sinfonia convention of the day. But they’re both brimming with personality.

Braying horns in the opening movement of the F major are offset by a lilting central Andante and a graceful, pastorale-ish finale. Mighty contrasts – of dynamics, texture, materials, mood, etc. – mark the G-major Symphony which, like parts of some of Beethoven’s later entries in the genre, runs without pause between its movements.

In this context, the Beethoven symphonies, with their clearly delineated subject matter and exploded forms, stand in sharp relief.

While, in the First Symphony, the sheer invention and brilliance of Beethoven’s orchestral writing jumps out, the music’s subtler details – like the sculpting of phrases in the Scherzo’s Trio section – don’t get lost.

The Second is marked by a close attention to dynamic nuance and articulative detail; the Akademie’s playing ably emphasizes the extremes in Beethoven’s writing, while also capturing the Haydn-esque whimsy of his writing (especially in the finale) well.

Taken with the Bach symphonies, these familiar Beethoven scores feel part of a much richer tradition than the one with which we’re familiar. The end result, then, is spirited and thoroughly engaging: a worthy celebration of two symphonic innovators. 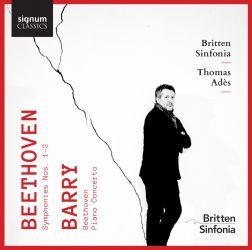 Thomas Adès’ new recording with the Britten Sinfonia pairs the first three Beethoven symphonies with another musical original, this one the contemporary Irish composer Gerald Barry. It’s a smart combination: Barry’s about as fresh and unpredictable a voice as they come and both his 2008 orchestral song, Beethoven, and the 2012 Piano Concerto fit well in this program.

The former sets Emily Anderson’s translation of Beethoven’s letter to his “Immortal Beloved.” Barry’s writing in it is wonderfully versatile and fluent: the music never sits still or repeats itself. Indeed, it’s often unsettled and spastic, sometimes rather banal, often playing off the melodramatic episodes in the text to heighten their effect.

Similarly bracing is the performance of Barry’s single-movement Piano Concerto pianist Nicolas Hodges turns in. Here, Barry’s writing is more abstracted and austere: ensemble and soloist are essentially locked in a freewheeling argument that never really resolves. But the unpredictable turns the piece takes – thundering cluster chords, dominant-seventh arpeggios in the piano accompanied by a pair of wind machines, a swirling orchestral storm among them – never fail to engage the ear.

Hodges plays the daylights out of the solo part (Barry wrote the piece for him), while the Sinfonia’s contributions feel conspicuously on-point – and, often enough, the demands Barry makes on them are as ferocious as those he requires of the pianist.

Adès’ take on Beethoven is likewise concentrated and energetic, largely following the composer’s metronome markings and emphasizing his music’s youthful athleticism. The first two symphonies are particularly fine in the latter regard: fresh, agile, playful. Their outer movements brim with momentum and terrific balances: every voice has a place in these readings, and they all speak accordingly.

In the Third Symphony, though, some trouble spots emerge. The opening movement drives too hard: the moments that call for lyrical freedom sound breathless. During the funeral march, not only do the tempos err on the side of briskness but one misses stronger contrasts of mood and character (the maggiore episode, for instance, sounds dutiful and constrained).

Overall, though (this Eroica excepted), these are illuminating Beethoven readings: well-balanced, beautifully played, revealing all sorts of detail-work in the writing that usually gets glossed over (particularly involving Beethoven’s woodwind scoring). The Barry selections are smartly done, too. They’re strong contrasts, to be sure, but not entirely unrelated (either thematically or in Barry’s sometimes tightly-motivic writing) – and, like the Beethoven performances, brilliantly engineered. Teodor Currentzis’ new recording of Beethoven’s Fifth Symphony is also well-recorded: you can hear everything he asks his orchestra, musicAeterna, to do. Some of it is impressive. The ensemble’s textures are lean throughout, nowhere more uniform than in the second movement’s refrains and during the wild Trio of the Scherzo. Some interesting details pop out, too – like the contrabassoon line in the finale (which proves a bit too present, actually).

The whole performance, though, seems to miss the score’s larger point. This is a Beethoven Five lacking any sense of true delivery, triumph, or joy. What we get, in the finale at least, is manufactured euphoria. Before that, nearly everything is pushed to within an inch (or less) of its life. The results aren’t pretty, to be sure – but that’s not this disc’s problem. Its fundamental issue is that, interpretively, Currentzis’ reading is one-dimensional and unconvincing.

His take on the Symphony’s first movement is furious: fast, angry, and dry. There’s no real feeling of release in the lyrical second theme. Worse, thanks to the combination of mannered phrasings, driven tempos, and gratuitous dynamic swells, there’s little sense of the music ever being able to breathe. The second movement – while impressively together, ensemble-wise – is expressively dead: the whole undertaking sounds and feels mechanical.

As in the opening movement, the finale is pushed too hard, its phrases stiffly controlled (the piccolo runs near the coda sound like machine gun bursts) with dynamic swells (again) tactlessly underlined. Only the third movement, with its spare textures and snappy rhythms, really clicks.

Ultimately, this Beethoven Fifth proves a manic assault on the senses: an inadvertent reminder of André Previn’s observation that the music of the canon is “invariably better than any performance of it can be.” 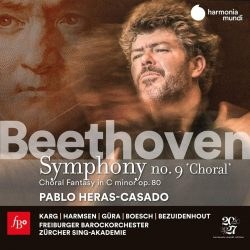 When it comes to the Ninth Symphony and Missa solemnis, it’s rare that Beethoven’s vocal writing – which is occasionally ungainly and misjudged – consistently shines.

Yet the best thing about Pablo Heras-Casado’s new account of the Ninth is its finale, which is magnificently sung by the Zürcher Sing-Akademie and a strong quartet of soloists: soprano Christiane Karg, mezzo-soprano Sophie Harmsen, tenor Werner Güra, and bass Florian Boesch. Their performance wants for nothing: light on its feet, supple in tone, rhythmically agile, full of color, always in tune, and supremely enunciated, this is a model “Ode to Joy.”

The preceding three movements are largely well-done, too. Heras-Casado’s tempos are lively and he ensures that the Freiburger Barockorchester’s textures are always lean. That approach emphasizes the Ninth’s inherent weirdness (its rhythmic ambiguities, odd phrase structures, and harmonic daring) while also clearly elucidating the piece’s singular structure.

Yet there’s a disagreeable rigidness to the group’s phrasings and tone that’s particularly pronounced in the opening pair of movements. Additionally, in each of those (and, to a lesser degree, in the third movement) balances proves troublesome, with the strings regularly covered by woodwinds and brasses. While this last may be an engineering issue, it’s a frustrating blemish, since the violins consistently sound scrawny and underpowered.

Oddly, none of that is a problem in the account of the Choral Fantasy that fills out the set. Here everything’s well-balanced. The variations, especially those featuring solo woodwinds, are terrific. Likewise, fortepianist Kristian Bezuidenhout delivers a stylish account of the involved keyboard part: the cadenza is beautifully phrased and sounds wildly improvisatory. The same vocal forces as in the Ninth capture the music’s closing peroration radiantly.

To be sure, then, we’ve got a superb Choral Fantasy. Would that this Ninth had proved as satisfying.