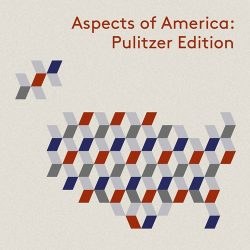 One of the best recordings of 2018 was the Oregon Symphony’s Aspects of America, which showcased (mostly) recent scores by five leading American composers. Now comes the second installment of the series, Aspects of America: The Pulitzer Edition. It’s just as fine – and maybe even more striking – than the first volume.

The set consists of three works, each of which were awarded the Pulitzer Prize; each of them, subsequently, have all but disappeared from the repertoire. Why that’s the case is a mystery, especially given the confident performances the Oregon ensemble and conductor Carlos Kalmar turn in.

Howard Hanson’s 1944 Symphony no. 4 is the compilation’s oldest piece. While much of his music has fallen by the wayside, this effort, a focused, 20-minute-long meditation on the Latin Requiem Mass, retains an immediacy that is simply bracing. Its four movements trace an outline of the familiar liturgy, titled, respectively, “Kryie,” “Requiescat,” “Dies irae,” and “Lux aeterna.”

The reading Kalmar draws from his forces is lively and lyrical in the opening “Kyrie,” soaring (and marked by some stirring brass playing) in the “Requiescat,” and briskly slashing in the “Dies irae.” But it’s the concluding “Lux aeterna,” with its lush string writing and consoling epilogue, that ties the work, beautifully, together.

Similarly involving is Walter Piston’s 1961 Symphony no. 7. Here, Kalmar and his orchestra turn in a darkly searching account of the first movement, full of rhythmic and coloristic activity and, again, highlighted by some edgy brass playing. The contrapuntal lines of the central “Adagio pastorale” sing, while the finale brims with force, passion, and energy.

Many of those same qualities mark the Oregon Symphony strings’ account of Morton Gould’s 1995 Pulitzer Prize–winning Stringmusic. Their ensemble work is fantastic throughout, especially in the concluding “Strum.” But the larger reading proffers a strong sense of the music’s whimsical character (in the “Tango”), expressive depths (in the “Dirge”), and lyrical impulses (in the “Ballad”).

In a word, then, you could hardly ask for more convincing, striking readings of this fare than what Kalmar and his Oregon Symphony delivers. Typical of Pentatone, the disc’s engineering is excellent. For lovers of American music, don’t miss this release. Here’s an album you’d really like to hear played by the New York or Los Angeles Philharmonics. If only American orchestras took such pride of ownership in American music!

Instead, it falls to the ORF Vienna Radio Symphony Orchestra and conductor Arthur Fagen to tackle four pieces by Morton Gould. In general, their efforts are fine and certainly commendable – if not quite as brilliant as the music deserves.

This is most apparent in the ORF’s account of Gould’s Spirituals for Orchestra, where the music’s most idiomatic moments lack a certain imperativeness. The second-movement “Sermon,” for instance meanders. “A Little Bit of Sin,” some spry figures notwithstanding, is foursquare. “Protest” is, until a surging climax, rhythmically and emotionally subdued. The concluding “Jubilee” is bright but a bit stiff.

The three symphonettes that fill out the disc are charming, tuneful pieces and, if you haven’t got (or can’t find) David Alan Miller’s recording of nos. 2 and 3 or Maurice Abravanel’s of no. 4 (the “Latin-American Symphonette”), there’s plenty to enjoy here. That said, there’s more spirit and élan to be gleaned from those alternatives.

On the present release, the best performance belongs to the Symphonette no. 2 (“Second American Symphonette”). Its three movements anticipate the dance episodes from Leonard Bernstein’s On the Town by a few years but they completely hold their own. The ORF rendition of the first, once it settles down, is fresh and chill. The cheeky central “Pavane” is highlighted by a woozy muted trumpet solo, and the finale is downright jaunty.

Similar qualities mark the writing in the Symphonette no. 3 – a swinging first movement and lively finale frame a bluesy “Intermezzo” and spunky “Gavotte” – but the performance of this work is more tentative, particularly in the exposed writing for upper strings.

The “Latin-American” Symphonette, on the other hand, offers a sultry, well-shaped account of the “Tango” and some good, clear percussion in the concluding “Conga.” But the latter simply doesn’t tear along as wildly as it might. Likewise, the first movement isn’t anywhere near as exuberant as in Abravanel’s hands and the “Guaracha” comes over a bit too precious.

As usual, Naxos’s sonics are excellent and balances leave nothing to be desired. All this recording requires is a bit more freedom of character and spirit. But, at the very least, Fagen and his orchestra are compelling advocates for this sadly neglected fare: Gould’s symphonettes deserve much wider currency than, these days, they’ve got. 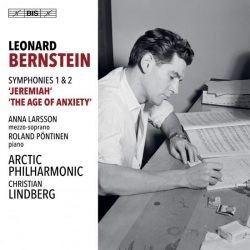 Christian Lindberg’s new recording of Leonard Bernstein’s first two symphonies picks up where his 2018 account of Bernstein orchestral works left off. Which is to say, with lots of cleanly chiseled playing and lucid textures, but not quite a compelling command of Bernstein’s singular voice.

In the Symphony no. 1 (Jeremiah), the first movement is simply played too literally and quickly: it’s neither dark, broad, nor weighty enough. True, the Stravinskyan elements in Bernstein’s writing come through – but at the expense of the music’s Mahlerian soul.

Opposite difficulties mark the central “Profanation.” Here, Lindberg and the Arctic Philharmonic Orchestra (APO) follow Bernstein’s tempo markings closely, but the results feel slow and measured. In the closing “Lamentation,” though, contralto Anna Larsson sings with a pleasing duskiness, and the APO brings a wide dynamic range and close attention to articulations to their reading; it’s the most successful aspect of this performance.

Lindberg’s account of the Symphony no. 2 (The Age of Anxiety) fares, on the whole, a bit better. The “Prologue” has a good sense of atmosphere, the orchestral textures in “The Seven Stages” sparkle, and the concluding “Epilogue” builds to a shimmering peroration.

That said, Pöntinen’s reading lacks some of the rhythmic verve and drive on display in Lukas Foss’s and Jean-Yves Thibaudet’s respective performances of this piece. It’s not sleepy, by any means, but could benefit from bigger, bolder colors, larger dynamic contrasts, and a greater sense of stylistic freedom.

As usual, Bis’s engineering is first-rate and, taken with Lindberg’s attention to textural detail, you’ll rarely hear the inner workings of both symphonies projected with more confidence or clarity. If only they exhibited a bit more of Lenny’s style and spirit, though.