The music and performances on this delightful trio album are blithe and profound, a combination that should charm many listeners. 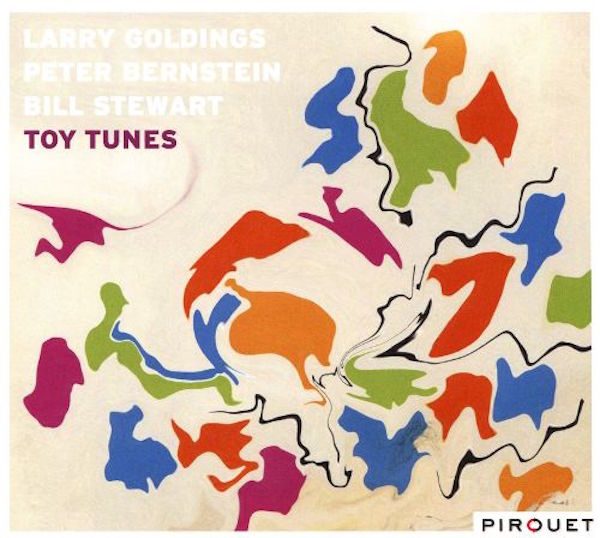 For decades, certainly since he made The Intimacy of the Blues, his 1991 trio album with guitarist Peter Bernstein and drummer Bill Stewart, organist Larry Goldings has been praised for something he is not. He doesn’t play, we are reminded, in that once dominant funky style popularized and perhaps even memorialized by Jimmy Smith. Nor does he mimic the throbbing, intense, and sometimes sentimental style of Wild Bill Davis. Goldings definitely has funk credentials: he recorded with James Brown’s saxophonist, Maceo Parker.

The truth is that his style, and that of the trio, is cooler and more wide-ranging than the styles referenced above. Goldings’s organ sounds light, alert, and bouncy, but it is his ideas that we listen for, more than his instrument. His inventiveness has been widely appreciated: he has recorded with Gary Burton, Chris Potter, Matt Wilson, and on John Scofield’s tribute to Ray Charles. He also specializes in accompanying superb contemporary singers; he is on Madeleine Peyroux’s Careless Love and has appeared behind Kevin Mahogany, Melody Gardot, and Luciano Souza. More recently he performed on the energetic double CD set Saudades with Jack DeJohnette and John Scofield. (Saudades is a tribute to drummer Tony Williams’ group Lifetime, which featured the progressive organist Larry Young, a likely influence on Goldings.)

Each of the players on Toy Tunes has also been a leader: this is an all-star group. As sidemen, they have played with the best of the best. For example, all three recorded with guitarist Jim Hall, who noted of Bernstein that he “has paid attention to the past as well as the future. He is the most impressive guitarist I’ve heard … for swing, logic, feel, and taste.” The trio members’ careers have overlapped: like Goldings, Stewart has recorded with John Scofield, Chris Potter … and Maceo Parker. The group’s repertoire is, and has always been, tasteful as well as unusual. Toy Tunes is named after their version of Wayne Shorter’s “Toy Tune” from Shorter’s album Et Cetera (1965). They also revive Carla Bley’s “And Now the Queen,” a tune often recorded by Paul Bley —  and once by Carla on a European tour. Goldings has a more direct connection with the composer: he played on Carla Bley’s 4 by 4.

Even more daring, the trio takes on a tune made enduringly (and perhaps unbearably) famous by Liberace: “I’m in the Mood for Love.” While Stewart sets up a brisk, pitter-patting tempo on brushes, Goldings states the first section of the song in hushed tones. At the end of the chorus, Bernstein takes over for the first solo. Goldings’s re-entry sounds a playful key, with its repeated short phrases and rapid-fire reminders of the original melody. Then the two leads trade fours, before Stewart takes a restrained solo.

Goldings begins “Toy Tune” in an otherworldly fashion, providing a few eerie phrases that stop almost as soon as they start. Only gradually does the listener realize that the organist has come up with another version of Shorter’s melody. Throughout the track, Goldings works at another tempo, perhaps inspired by another world, from Bernstein. It’s a distinctive conversation: free in spirit, yet it never becomes completely oblivious of the melody. The band also plays some originals, including the opening tune “Fagen,” a simple but memorable riff composed by Goldings. The music and performances on this delightful trio album are blithe and profound, a combination that should charm many listeners.