Even though Wormwood’s sound is thick and lumbering, the band is actually pretty nimble.

Doomriders guitarist Chris Pupecki and that band’s former drummer, Chris Bevilacqua, reconnected a few years ago and made an album that dug deeply into the sonic sludge. They called the project Wormwood; the resulting self-titled 5-song record was a notable addition to the modern heavy metal canon.

But that effort did not foreshadow what was to come, making Wormwood’s new album Mooncurse all the more explosive.

Mooncurse serves up the core doom and dirge sound that Wormwood built its reputation on but, at the same time, the disc offers greater dynamic shifts.  The band is creeping onto new terrain. Bassist Greg Weeks of the Red Chord and guitarist Mike Gowell of Phantom Glue have joined Pupecki and Bevilacqua, which partially accounts for Wormwood’s growth spurt.

But these veterans of the Boston heavy metal scene bring more than solid chops to this project; they also bring an undeniable chemistry.

Even though Wormwood’s sound is thick and lumbering, the band is actually pretty nimble. Yes, the songs on “Mooncurse” are out-and-out heavy, but they are not weighed down with cliché or by-the-numbers genre motifs.

“Infinite Darkness” launches the record in understated fashion. A few bars of reedy, bowed strings waft up like smoke before the heaving rhythm section kicks in.

Pupecki’s vocals are often buried deep in the mix and lyrics tend to be skeletal and impressionistic. But there’s no mistaking the dark mood these songs conjure up. “Infinite Darkness,” “Undesirables,” and “Forlorn” tuck plenty of howling desperation into an energetic mix. The effect isn’t so much a determined rumination on wretchedness as it is simply popping a cork on a bubbly bottle of misery and letting it flow. 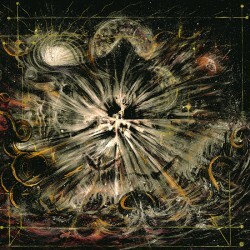 The band methodically picks up the tempo as it moves through the first half of the album. Then Wormwood hits a bit of a reset with the album’s title track, which is filled with its psychedelic trappings. Abstract, and full of contrasting musical passages, “Mooncurse” comes off as an elongated version of the old adage “Nothing good happens after midnight.”

The songs that follow—“Parasitic Twin” and “Burn the Psychic Vision”—carry on in a similar vein of shape shifting and experimentation kept in check by murky tones and edgy tempos.

A muscular instrumental, “Passage of Fire,” closes the album on a powerful note as Wormword starts off with a rigid martial arrangement that is transformed, by the conclusion, into a surging wave of music. True to Wormwood’s doom metal underpinnings, the dark narrative gradually unspools, yet the band does an uncanny job of keeping the thrill going by way of a skillful slow burn.

Translation Loss Records is releasing Mooncurse on Oct. 20, the same day Wormwood performs at Great Scott in Allston with the bands All Pigs Must Die and Plagues.