You are here: Home / Books / Book Review: Niccolò Ammaniti’s “Me and You” — a lightly charming, digestible morsel

Italian writer Niccolò Ammaniti usually writes with an unadorned style about moral predicaments of the young in small-town Italy. Me and You, a slender effort in all respects, covers this ground as well, with the difference that 14-year-old protagonist Lorenzo Cumi is from an affluent Roman family.

Me and You by Niccolò Ammaniti. Translated, from the Italian, by Kylee Doust. Black Cat (Grove/Atlantic), 155 pages, $14. 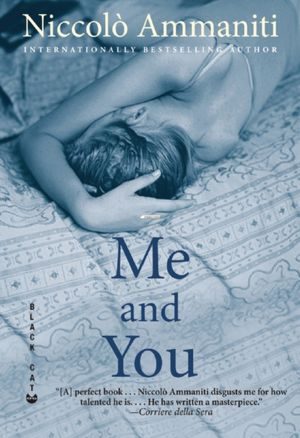 Niccolò Ammaniti is a star in Italy, though none of his previous three novels to be published here—I’m Not Scared (2004), I’ll Steal You Away (2007), As God Commands (2009)—made a strong impact in sales or reviews. Oddly, As God Commands is also available under a different title, The Crossroads. Elsewhere, it’s a different story. I’m Not Scared was an international bestseller, and Me and You has sold a half-million copies worldwide. The film version of I’m Not Scared was released in the United States in 2004 but not seen by many, grossing about $1.5 million.

Ammaniti usually writes with an unadorned style about moral predicaments of the young in small-town Italy. Me and You, a slender effort in all respects, covers this ground as well, with the difference that 14-year-old protagonist Lorenzo Cumi is from an affluent Roman family. He is his parents’ only child, although his father, a successful businessman, has a 23-year-old daughter by a previous marriage.

Lorenzo, who narrates the story from 10 years after, lives in a world of his own, unable or unwilling to connect with his peers or indeed with anyone except his mother, with whom he has a Mama’s-boy relationship. He tries to figure out what other people want from him and to pretend cooperation so they will leave him alone and flies into screaming rages when they don’t. A psychiatrist tells his worried mother (his father thinks that he will shape up with firm treatment) that he “is unable to feel empathy for others. For him everything that’s outside his circle of affections doesn’t exist, has no effect on him. He believes he is special and only people as special as him can understand him.” This is a fair description of Lorenzo’s behavior but not of his real wishes; he longs for friends.

Lorenzo has an active fantasy life, and one day he overhears a girl schoolmate plan a ski weekend with her friends. At home that night, he impulsively tells his mother that he has been invited to go along. She is thrilled at this sign of an incipient social life. Lorenzo is in a panic when she begins to drive him to the meeting place and insists she drop him off at a distance so as to avoid embarrassment in front of his “friends.” She reluctantly agrees, and once she is out of sight, he jumps on the Rome metro, laden with skis and boots, and heads home. When he is certain that his parents have left for the day, he sneaks into the large villa and hides in some cellar rooms with furniture and a toilet. His plan is to hide there all week, sneak out on the last day and meet his mother, then regale her with tales of jolly times on the slopes.

Of course we know this is not going to work. Sure enough, his drug-addicted half-sister, Olivia, strung out and desperate for money to buy drugs, shows up unexpectedly and invades his hiding space. Far apart as these two are in every way (she is nine years older and a faded great beauty), something strange and almost beautiful grows for a time out of the reluctant, ad-hoc alliance they form. Each needs the other for one thing.

Lorenzo reminds an American reader of Greg from Jeff Kinney’s Diary of a Wimpy Kid or other teenage misfits from Holden Caulfield to Colin in Alan Sillitoe’s Loneliness of a Long-Distance Runner. Aside from his rages, which disturb other people but appear to be mostly nonviolent, Lorenzo is no sociopath; he is intelligent, talented, shy, and, of course, misunderstood.

I have not read Ammaniti’s other books and cannot compare You and Me to its predecessors. It is a lightly charming, digestible morsel, which would probably succeed well in the young adult category. It is not aimed at that market, however. As adult fiction, it seems more like a long short story or at most a novella. The plot is neatly resolved, but the epilogue, revealed by the adult Lorenzo, seems cheap and unearned. We leave the story with hopes for Lorenz—apparently he grows up (we don’t know how) to be at least emotionally intact—but we learn little about his parents or about Olivia. She is a tissue-thin sketch of a character whose only role in the story is to challenge her little brother’s selfishness and isolation.

One finishes this book, an afternoon’s read, with a strong sense of an opportunity missed. Some agents or editors would have urged the author to take this effort back and flesh it out as a full novel with realized characters. Or made it one of a set of linked stories about Lorenzo, his parents, and his sister. Possibly we’ll read more about them in future books. Or possibly in Me and You Niccolò Ammaniti has wrought exactly what his following wants. It is not fair to fault a writer for not being like another. With that concession, let it be said, nonetheless, that even at the same length, Natalia Ginzburg would have made a great book out of this material.

David Mehegan formerly wrote about books, authors, and publishing for the Boston Globe.