From the pounded opening bars of “Prove It All Night,” it’s revelatory to see a young, lithe Bruce Springsteen as he prowls his domain, cocks his guitar, and belts his impassioned vignettes of blue-collar struggles and dreams. 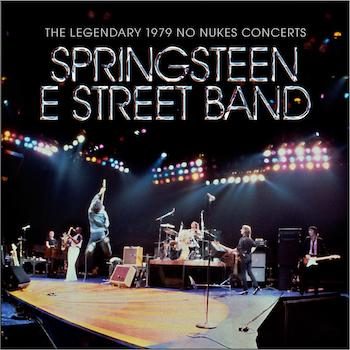 Like James Brown without the cape, Bruce Springsteen was flaunting a routine of feigned exhaustion toward the end of a turbocharged encore of rock ‘n’ roll oldies. “I can’t go on like this,” he cried. “I’m 30 years old. My heart’s starting to go on me!”

Springsteen had hit that birthday at midnight, his youthful age only adding to the joke. There was no chance his heart wasn’t hungry for more. He and his E Street Band were headlining their second of two nights at Madison Square Garden for 1979’s star-studded No Nukes concerts — and this 90-minute set was half the length of their typical marathons.

The No Nukes shows by Musicians United for Safe Energy spawned an album and film that gave much of the country a first taste of the Springsteen-led band’s live prowess, fueling its stadium-level ascent in the ’80s. Now, four decades later, we have The Legendary 1979 No Nukes Concerts, presenting the entire set by Springsteen and the E Street Band at their rarely filmed peak. It’s a composite that film editor Thom Zimny cobbled from two similarly scripted nights and includes 10 previously unreleased performances. The set is available on two LPs or CDs with DVD or Blu-Ray, as well as audio and video streaming services — all showcasing a crisp sound mix by Bob Clearmountain. But it’s the upgraded 16 mm film that truly slays.

From the pounded opening bars of “Prove It All Night,” it’s revelatory to see a young, lithe Springsteen as he prowls his domain, cocks his guitar, and belts his impassioned vignettes of blue-collar struggles and dreams. The concert is filmed from old-school vantage points, primarily the pit before the stage. Full-band wide angles turn to looming proximity as Springsteen hovers to crank out a “Badlands” guitar solo capped by blurring windmills as he whirls to sax foil Clarence Clemons, a charismatic presence who shares the camera’s focus. Drummer Max Weinberg bashes his cymbals behind them. Guitarist Steve Van Zandt and bassist Garry W. Tallent hold flank, while organist Danny Federici and pianist Roy Bittan work the wings. But they’re mainly shown in peripheral placement to the stars of the show.

The group was sprung from cross-town recording sessions for The River, which wouldn’t be released until a year later. Springsteen debuted its title track onstage with a sober yet fervent reading, followed by party tune “Sherry Darling,” where he puts a wiggle in his dance steps next to Clemons’ tenor solo. Then he cues a unison spin to play to fans behind the stage (in an era before video screens handled that duty), and after he loses his guitar cord on the trip upstage, Springsteen playfully scampers away as a roadie tries to plug him back in.

Footage flips to the previous night (where Clemens sports a red suit rather than his white one) for favorites from the 1975 masterwork Born to Run. A star-filtered spotlight casts a halo over Springsteen as he sings “Thunder Road” in artful form, pointing his mic to fans who delight in roaring the line “Show a little faith, there’s magic in the night.” The partisan crowd likewise cheers a reference to his home state of New Jersey in the noir epic “Jungleland,” as the midnight gang assembles for a rendezvous with Clemens’ titanic sax break.

Those moody passion plays aside, Springsteen rocks the homestretch, starting with a spirited “Rosalita (Come Out Tonight).” The Boss climbs atop Bittan’s piano, riding it like a surfboard so hard to the music the bulky instrument moved beneath his feet.

The filming isn’t technically perfect. The camera shortchanges Van Zandt’s guitar solo in “Jungleland,” slips to flash the stage lip at the start of “Born to Run,” and totally misses Rosemary Butler as she nails the trademark high vocal in “Stay” when she, Jackson Browne, and Tom Petty help launch the encore. The film feels real, however, its ad-libbed execution organically capturing a kinetic experience (one that’s also bittersweet since Clemens, Federici, and Petty have all passed).

Springsteen only gets more delirious as he and the band kick off a frenetic “Detroit Medley” with “Devil with the Blue Dress On” and “Good Golly Miss Molly.” At one point, Springsteen pauses for an “emergency medical announcement” that people with weak hearts or stomachs should “leave the hall during the next five minutes of the show because it might be dangerous to your health.” For those who don’t want to go, he suggests an insurance policy as a side hustle. Either way, there are no takers as the party keeps raging — and Springsteen keeps storming around the stage — into “Quarter to Three” and (while film credits roll) “Rave On.” No fellow prisoner of rock ‘n’ roll is liable to leave this landmark performance, then or now.