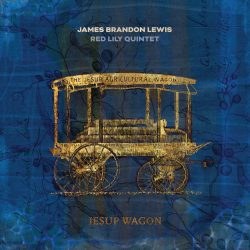 James Brandon Lewis is a 30-something musician who knows how to quickly grab your attention. His albums erupt with energy; he often picks a snappy narrative hook that first invites and then guides his listeners. But, for me, his art is essentially about the messages generated by the emotional power of his music.

Jesup Wagon, the saxophonist/composer’s latest release, his ninth and first for the TAO Forms label, takes us on a journey through the life of George Washington Carver (1864-1943), an African American who gained considerable fame as an agricultural scientist and inventor. He is best known for developing hundreds of products using peanuts, sweet potatoes, and soybeans. He was based at the Tuskegee Institute (now Tuskegee University).

The presence of bassist William Parker and drummer Chad Taylor immediately signify that the disc, though dedicated to an admired scientist, will be far from some sort of earnest soundtrack for a historical seminar. These guys play hard and for keeps. Bring in cornetist Kirk Knuffke, who often seems to be around what’s happening in the progressive jazz scene, and add Chris Hoffman’s cello for a little texture, and you’ve got the makings of an album that demands to be heard.

After a bit of an uneven start, the Jesup Wagon starts rolling by its third track. The explosive freedom generated by “Arachis” is more than worth the wait. According to Kelley’s commentary, the cut should be understood as an elegy to the peanut, about which the forward-thinking Carver was an enthusiast. He made visionary uses of the plant. One can hear the piece as an example of free jazz that first absorbs traditional forms before launching off into new territories. Each player gets a chance to open up: Taylor, Parker, and Hoffman ground high-energy effusions from Knuffke and Lewis, who obviously know the roots and offshoots of small-group collective improvisation.

“Experiment Station” starts with a contrapuntal structure, building into a radiant trio passage that gives Lewis an opportunity to let his boisterous tenor sax loose to explore textures and timbres. Knuffke takes over and he tosses in rapid-fire lines with a Spanish tinge. The rhythm section’s roll and tumble encourage Parker to secure a forceful return to the theme.

“Seer” offers a loping rhythm flavored by Taylor’s mbira, while “Chemurgy,” named after an industrial movement inspired by Carver, has Parker on the three-stringed gimbri.

For this band, interweaving science and culture (not such an easy task nowadays, but a necessary one) inspires a heady, conceptual celebration of traditions old and new. There are hints of melancholy in this homage to a significant figure in American agriculture, but the overall feeling in this tribute is pride — in past accomplishments and in the joy of creative expression. 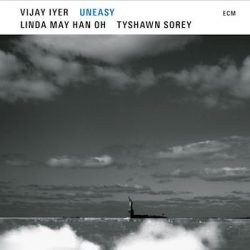 Speaking of expressive facility, pianist/composer Vijay Iyer has long proved his talent for creating music that comes right at you. Uneasy, his second trio disc for the ECM label, builds on his reputation for intensity, but positions it in the context of an extraordinary musical camaraderie.

The result is interestingly paradoxical. Trio-mates Linda May Han Oh (bass) and Tyshawn Sorey (drums) are completely engaged with the leader’s vision of making music that reflects our anxious times. But the threesome’s committed and impressive virtuosity can’t help but give off bits of uplift even as it worries about where we are going.

The title cut clings to ominous modes. Originally conceived as music for a dance piece by choreographer Karol Armitage, the track finds abstract grace amid (or despite) its turmoil. Iyer’s percussive melodicism and Sorey’s hyperactive drive inject an invigorating energy into the gentle elegy of the following cut, “Retrofit.” This is a soothing embrace among knowing souls.

“Combat Breathing” is another powerhouse Iyer original, inspired by a political action taken at the Brooklyn Academy of Music. Building on an opening melodic fragment, the piece ebbs and flows a bit — but it hits hard when it chooses. Listen for a compelling solo from Oh at the tune’s center.

“Children of Flint” is an appropriately somber remembrance of an ongoing man-made disaster in Michigan. The modulated tension in this piece once again situates an Oh solo at a crucial juncture. The pianist’s poignant melody honors a city’s despair, while suggesting (maybe) some sort of renewal.

The Cole Porter classic “Night and Day” receives a revved-up treatment that not only honors the original but prior interpretations as well (Iyer has cited McCoy Tyner’s handling of the tune). This is light years from a lounge — each musician infuses sparkle, polish, and longing.