The voice in Field Music is disciplined, its cagey earthiness unfailingly engaging our attention. 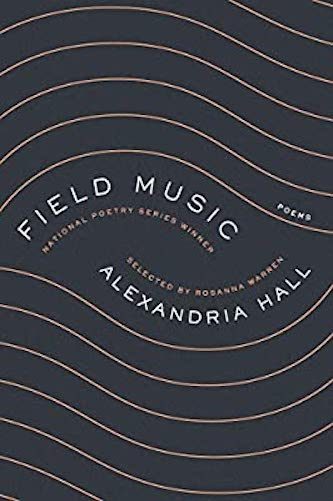 I was first introduced to poet Alexandria Hall in a 2013 music video filmed at Shenanigans, a strip club in White River Junction, VT, that includes a pool hall/bowling alley. (There’s also a no-tell motel located nearby). In the video, the waif-like Hall and her (unseen) band Tooth Ache perform an electronically dreary dirge while she dons the traditional bullfighter’s traje de luces, complete with montera, tassels, and rosy red lipstick. The highlight of the three and a half minute film — titled Matador — are appearances by pole dancing, booty-thumping strippers, and a live bull waiting to lock horns with Hall as she struts across the Shenanigans parking lot. (She’s wearing stilettos instead of brandishing an estoque, the sword matadors plunge into a wounded bull’s hide).

Flash forward seven years later: Hall, still looking rather waif-like, has published an impressive first collection of poetry, Field Music. She’s won a $10,000 National Poetry Series Award. She’s shed her skin as a singer with Tooth Ache and Beth Head, two bands she performed with around Burlington while she was an undergraduate at University of Vermont, and earned an MFA sheepskin from New York University. Her biographical note tells us she is now a Ph.D. student at University of Southern California.

She’s no academic poet, however. This is made clear by the first poem in the collection, “Cowbird,” when she writes: “Nothing ever stays where it ought:/runoff dragged into the river/by summer rains from shit-covered fields–/my thickly perfumed Vermont.”

Hall grew up in Addison County, VT, home to the bucolic town of Ripton (population 400), where Robert Frost wrote his poems in a rustic cabin on his 150-acre farm that abuts Middlebury College’s Bread Loaf campus. But she’s no Frost-wannabe. Hall’s Vermont is a place of trailer homes, goat herders, folks that barely get by and speak in that dry swamp-Yankee drawl: “All night the whimpering hills,” she writes in “On Beauty.” “Transmission on the truck’s broke. Winter pushes my father and his home and his froze-up pipes and piles of scrap to a grater and grates, These gift-basket ideas solve little. Awful nice a ya, wheezes Pa.”

Hall’s work has more in common with the late Vermont poet Hayden Carruth (who lived and taught in Johnson, in the Northeast Kingdom, and wrote about isolation and insanity), than with the two Vermont State Poets, the late Galway Kinnell (who lived in Sheffield), and this year’s Nobel Laureate, Louise Gluck, (who lived and taught in Plainfield). In one of the best poems in her collection, “Practice Test for Insatiable Loneliness,” one can sense Carruth’s influence in the line “If you leave your name and number/my hunger will get back to you as soon as possible.”

Hall’s Vermont is hardscrabble. It is a place that reeks of the aforementioned manure and “skunk … and lilacs.” She writes of the town of Ferrisburgh in “The Lake House”: “At night, when the neighbors’ cows get loose and sashay/around the yard. This trailer’s just a dinghy slapped/ in their waves.” At the poem’s end, she observes: “No one ever knocks/at the door./Occasionally, though, the cows float by.”

Hall’s book also takes readers to New York, Spain, Peru, and Germany; there are homages to poets Elizabeth Bishop and Rainer Maria Rilke. These poems, however, are less successful because they come across as academic exercises — they lack the sense of place so keenly etched in her Vermont poems. When she writes of Addison County in the line, “There was too much moon over the night in Middlebury/so I put a man’s face in front of it, and then I loved/that man,” we are transported to an evening spent rambling across the fields near Frost’s farm in Ripton.

Hall’s first collection suggests her days of living as a chameleon — an artist/performer who gets her kicks from hanging out in dive bars in White River Junction and dressing up as a matador — may be over. The voice in Field Music is disciplined, its cagey earthiness unfailingly engaging our attention. The challenge for Hall will be for her to remain true to her roots. When she ventures onward, she’d be advised to keep in her nostrils — for sustenance and inspiration — the aroma of that “thickly perfumed” fetid Vermont soil.