When I learned that Louise Glück, a 77-year-old Cambridge-based poet, had won the 2020 Nobel Prize in Literature award, I flashed back to a wintery night in the ’70s when I heard her read her work aloud.

Glück was on the faculty at Goddard College back then, located in bucolic Plainfield, VT. I had traveled there during intersession from my university studies in Rhode Island. I was a guest of friends who were encamped in a barn at Cate Farm, a sprawling place adjacent to the Goddard campus acreage that they shared with the Bread and Puppet Theater folk who, like Glück, were artists-in-residence. The landscape was blanketed with snow, but the sub-zero temperature somehow didn’t seem to bother the cadre of miniature horses that roamed freely in and out of the barn. It was a stony couple of weeks. Most of my memory of staying in Plainfield is blurred — save for encountering Glück and hearing her read her poems in her distinctively haunting voice.

In an interview with Poets & Writers magazine, she recalled her teaching experience at Goddard (she later was selected to be Vermont State poet, an honor she shared with versifiers Robert Frost and Galway Kinnell), as positive: she said it got her writing again. She had been wrestling with a form of “writer’s block” and had taken a long hiatus.

To hear Glück (her name rhymes with “click”) read aloud is reminiscent of the recordings of Frost reading his poems, particularly his famous, “Birches,” a quintessential New England meditation in which he speaks of our relationship with the woods, an interrelation that is both cruel but necessary. (Earth’s the right place for love:/ I don’t know where it’s likely to go better). Frost’s delivery of the poem was devoid of emotion. Glück reads in a similar manner: her voice is dry, like autumn leaves. Yet her words are passionate, and they spill forth, like Frost’s, driven by breath that endows them with life.

While the Nobel committee lauds her for poetry “that with austere beauty makes individual existence universal,” I think of her as a poet who proffers a hauntingly individual power. She doesn’t invite us to share what she says so much as insist we sit up and pay attention to it. She crafts her poems with an insinuatingly thorny power that demands the reader pay close attention. Her intention is to quiet our own noisy, distracted inner thoughts. 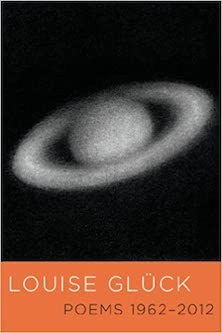 In 2012, several of her poetry volumes were collected together in Louise Gluck: Poems 1962-2012 (Farrar, Straus, Giroux, New York). Several poems here are deeply melancholic (she suffered from anorexia as a young woman, overcoming it with the help of therapy), while others lob epiphanies or offer examples of wry wit.

One of my favorite poems from the aforementioned volume is titled “Lullaby.” It bursts with affection and tenderness. It reads, in part:

It took me back to Frost who, in an earlier version of “Birches,” wrote, in parentheses, this line (later edited from the final version):

Of course, Glück has always been free to be “poetical,” but now her voice, because of this award, will be amplified, heard, and savored by a global readership.