“I think these shots bring out the fierceness of black metal, and the models are saying, ‘We can be this.’”

The stretch from Worcester to Springfield nurtures one of the hardiest heavy metal ecosystems in the country. This “Not Boston” region of Massachusetts has produced such popular and influential heavy metal bands as Killswitch Engage, the Acacia Strain, Shadows Fall, and Unearth.

And that’s just the tip of the spear: the full picture includes venues such as the Palladium in Worcester, home to a long-running metal fest. And the area includes a number of dedicated professional metalheads doing their part to generate and advance aggressive music. Among those key players behind the scenes are photographer Jeremy Saffer and recording engineer/producer Chris “Zeuss” Harris. 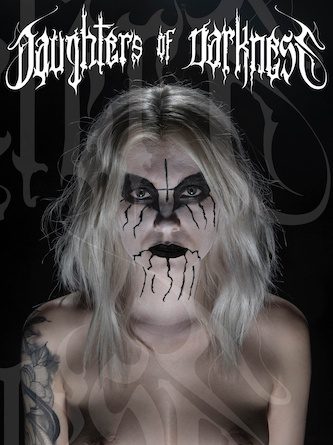 Saffer’s recently released volume, Daughters of Darkness, is a striking collection of female nudes.  It focuses on models who have made up their faces in black and white corpse paint, one of black metal’s visual signatures.

Zeuss lands producer credits on two notable heavy music releases out this fall: Heathen’s Empire of the Blind and Hatebreed’s Weight of the False Self.

Starting with Saffer, Daughters of Darkness is a remarkable capstone for a photographer whose living has pretty much happened by accident. As Saffer tells it, he started taking pictures of bands in concert simply as a way to get closer to the artists he admired.

“I was shooting shows at the Palladium with a disposable camera. I did so many shots with the camera set to auto. I just learned as I went along,” said Saffer, who lives in Chicopee, MA. He was also active as a musician in the Western Mass metal scene before turning to photography full-time.

Saffer studied photography once he decided he could pursue it as both a passion and a career, and built up relationships with the bands he liked, eventually shooting album covers and promo shots and chronicling tours. Saffer is now as much a fixture in the heavy metal firmament as any band is.

Alongside his music-related photography, Saffer also does fine art shots. When a colleague in Europe wanted an image similar to the one on the cover of Pulp’s This Is Hardcore – which depicts a the upper half of an unclothed woman lying against a plush red pillow – but reimagined to reflect the aesthetic of black metal, that served as the impetus for Daughters of Darkness.

Black metal is full of occult and demonic themes, delivered in appropriately loud and ominous arrangements by musicians typically done up in black and white corpse paint and clothed in Gothic black garments. Saffer said he was immediately drawn to the sound and vision of black metal when he started listening to aggressive underground music as a teen, and that initial shot inspired him to take more pictures of women that reflected the chiaroscuro aura of black metal.

A dozen years and hundreds of shots later, Saffer found Rare Bird Books, which is publishing Daughters of Darkness. The collection features pictures ranging from highly posed to wildly frenetic, some taken in studios, others outdoors. The common themes: corpses, paint, and nudity.

The models, Saffer explained, tended to be either black metal fans or musicians. They were familiar with the parameters of the look; nobody in the book will be mistaken for a Kiss fan.

“A black metal concert is pretty much a dude show. You don’t see a lot of female fans or musicians. But this opened up to that. I think these shots bring out the fierceness of black metal, and the models are saying, ‘We can be this.’”

Deluxe editions of  the book include a compilation album of black metal tracks curated by Saffer, who was given access to the Season of Mist record label vaults, from which he plucked tracks by Abbath (Saffer’s personal favorite), Mayhem, 1349, Rotting Christ and others. The book’s introduction was written by Lamb of God’s Randy Blythe and its foreword by Cradle of Filth’s Dani Filth, musicians whose bands have been the subject of Saffer’s work many times over the years.

Saffer is already pondering a second edition of this project: Daughters of Darkness isn’t just an expression of his art; the photographer feels that it is “a victory for all of us” in the black metal community.

When thinking about cities where great records come out of, places such as Nashville, Los Angeles, and New York come to mind. Not so much Hadley, MA. But that Western Mass town is home to Zeuss’s Planet Z studios, and the producer makes great heavy metal records.

Getting heavy metal to sound right on record can be tricky business. There’s no shortage of heavy albums –including some considered to be essential — that sound as if the band is performing miles away.

Zeuss is among the handful of record producers to come along in the early 2000s who has been able to capture heavy music’s fullness and ferocity without sacrificing its raw energy. He started with records by hometown heroes Shadows Fall as well as others. His credits to date include a mix of genres, from underground bands with huge followings to such commercial heavyweights as Rob Zombie and Queensryche. 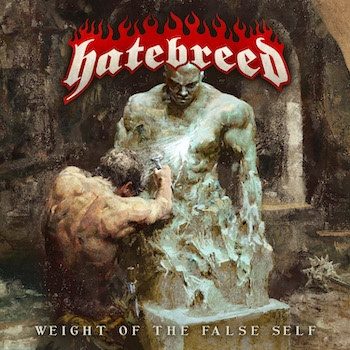 Connecticut’s Hatebreed is one of the bands Zeuss has worked with consistently over the years, and the partnership yields considerable dividends once again with Weight of the False Self. The album’s dozen tracks turn on the group’s patented blend of heavy metal and hardcore, a taut, pummeling sound that hurls knotty declarations of defiance and survival. Singer Jamey Jasta is such an engaging front man that he has become a metal celeb. Musically, he and the band are still convincingly agitated and aggressive 20 years on, whipping up gripping guitar riffs, brutal rhythm breakdowns, and a boisterous punk spirit. What tracks such as “Let Them Rot,” “Dig Your Way Out,” and “The Herd Will Scatter” lack in subtlety they make up for with their raw emotional frenzy.

Heathen’s Empire of the Blind is far better than anybody had a right to expect. This band has typically fallen into the “also-ran” category of great thrash bands from California’s Bay Area. It hasn’t helped that the group has had many starts and stops since forming in 1984. This new album is only the band’s fourth, its first since 2009’s The Evolution of Chaos.

This time around guitarist Lee Altus, who has marshaled the band since the beginning, and singer Dave White, who has been with the troupe for most of its existence, have crafted an undiluted and uncompromising thrash outing. Newer members Kragen Lum on guitar, Jason Mirza on bass, and Jim DeMaria on drums provide seamless support. The record proffers a pandemic-appropriate dystopian vision. At one point (“In Black”), White is just begging to be left alone to rot and decompose. The guitars slice and dice: the playing is precise, as if the band is tossing sonic darts that, for the most part, are striking the bullseye. And though other bands — Slayer, Metallica, Exodus, and Testament — are often cited as champions of the Bay Area thrash, Heathen pays expert homage to the genre when the band’s original guitarist Doug Piercy and Exodus guitarists Gary Holt and Rick Hunolt join in for the striking instrumental “A Fine Red Mist,” a fitting anthem to thrash.