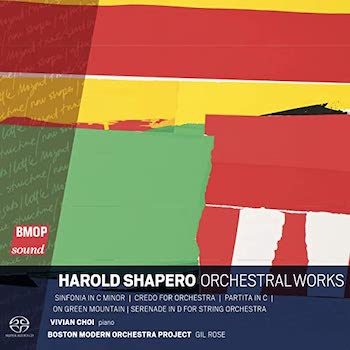 Harold Shapero is one of those Greatest Generation composers whose output has, unfortunately, fallen by the wayside. The Boston Modern Orchestra Project’s (BMOP) new all-Shapero disc aims to rectify that trend with a survey of five works that span 15 years, from 1945’s Serenade in D for String Orchestra to the 1960 Partita in C for Piano and Orchestra. In each of these pieces, Shapero’s stylistic language is consistently informed by Stravinsky’s neoclassical influence, though other identifiable influences also crop up.

In Credo, a movement salvaged from an aborted Concerto for Orchestra, lean orchestral textures that mightn’t be out of place in some of Aaron Copland’s populist efforts predominate. Yet the music goes its own way: a series of touching duets between strings and winds leads to a hymn-like statement in its first (and most effective) variation.

On Green Mountain, a 1957 reworking of a Monteverdi chaconne for jazz ensemble, is as breezy and ingratiating as one might hope: Brubeck-esque, with a slightly bigger band and some unexpected, but welcome, instrumental combinations (like a harp and drum kit).

The Serenade is restlessly lyrical, its five movements marked by bracing episodes of counterpoint and, in the second-movement Menuetto, abundant impish, dancing character.

There’s no lack of personality to be found in the Sinfonia, either, a striking curtain-raiser that deserves far more currency than it’s currently gotten.

A hair more austere is the Partita, with its sequence of short variation movements and bristling percussion writing.

For the present recording, Vivian Choi is the soloist in the latter. She dispatches the involved solo part with plenty of vigor and acerbity; in both of those qualities she’s matched, bar-for-bar, by BMOP and conductor Gil Rose.

Indeed, this is a disc that showcases what a fine ensemble Rose has cultivated over the last 20-plus years. The woodwind playing is particularly fine throughout, especially in the Sinfonia, which simply dazzles.

The strings have their moment in the Serenade, which flows with a lovely mix of repose and energy. Conspicuously fine is the central Larghetto, with its songful episodes that wouldn’t be out-of-place in Mozart juxtaposed against decidedly mid-20th-century dissonant outbursts.

In all, then, a fine, fresh disc of music by a composer who really deserves the attention. 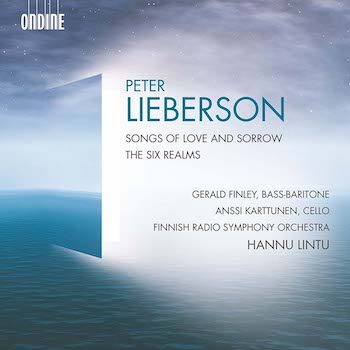 Peter Lieberson’s Songs of Love and Sorrow, a setting of five Pablo Neruda sonnets for baritone and orchestra that meditate on themes of love and loss, is an unfailingly touching piece. The former topic was, of course, the focus of Lieberson’s 2005 Neruda Songs, which the composer wrote for his wife, the mezzo-soprano Lorraine Hunt Lieberson. The present work forms something of a bittersweet sequel: Hunt Lieberson died of breast cancer just a year after Neruda Songs’ premiere, and her husband was diagnosed with lymphoma shortly thereafter (he died of complications from that disease in 2011).

Despite the tragic and painful circumstances framing Songs of Love and Sorrow’s composition, the score itself is movingly balanced – that perhaps a reflection of Lieberson’s devout Buddhist beliefs. Its harmonic language and orchestration is often lush and beautiful, as in the opening song’s (“Of all the stars I admired”) lovely melodic exchanges between the voice and ensemble.

Yet the music’s warmth is often offset by an atmosphere that’s clearly unsettled. That first song, for instance, ends with an abrupt, Mahler-like cadence. Equally striking is the intense, martial episode of the final movement (“As we close this nocturnal door, my love”); its sober coda stands as a shattering counterpoint to Neruda Songs’ finale (“My love, if I die and you live”).

The Songs’ debut recording, featuring bass-baritone Gerald Finley (for whom it was written) and the Finnish Radio Symphony Orchestra (FRSO) conducted by Hannu Lintu, captures all of the music’s alluring nuance. Finley’s diction and intonation are typically flawless and he brings a rich pathos to his account of the five sonnet settings.

Lintu and his fantastic FRSO deliver an accompaniment that’s texturally lean and emotionally in-tune, be that in the Songs’ somber moments or the more sensuous ones (like the second-movement “Full woman, flesh-apple, hot moon”).

They’re equally evocative accompanying Anssi Karttunen in Lieberson’s The Six Realms, which fills out the disc.

A concerto for amplified cello and orchestra, Lieberson’s score (written in 2000) explores the realms of human consciousness as described in Buddhism. It’s an appealingly concise piece, running just over 20 minutes, full of striking gestures and lots of virtuosic solo writing.

Karttunen’s performance is fervent and technically impeccable. His playing is clean and never insubstantial: the cellist potently draws out the thematic connections between “The Animal Realm” and “The Human Realm” movements and engages in some lively dialogue with the ensemble in the concluding “The God Realm and The Jealous God Realm.”

For his part, Lintu presides over a lithe, vivid accompaniment from the FRSO. The ensemble emphasizes the score’s Oriental gestures (bent notes, florid turns, etc.) with aplomb, and their playing never lacks for momentum or direction.

In all, then, this is a thoughtful and fitting tribute to a fine, sorely missed composer. 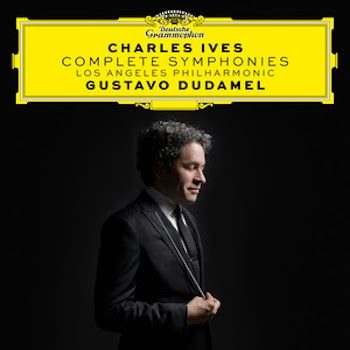 Charles Ives’s four symphonies haven’t exactly been poorly served on disc of late. But neither have leading American orchestras been chomping at the bit to record this extraordinary quartet of pieces. That makes the Los Angeles Philharmonic Orchestra’s (LAPO) new Ives cycle with music director Gustavo Dudamel particularly welcome. Taped just before the Coronavirus pandemic shut down life as we knew it, theirs are performances of astonishing technical control and, in spots, mighty expressive insight.

At the same time, there are a few moments where one wonders whether or not Dudamel’s got the full measure of the United States’ first iconic composer.

The visionary Symphony no. 4, for instance, offers the set’s weakest interpretation. True, everything is in its place. There’s a compelling sense of space and balance between the several instrumental ensembles and chorus in the first movement. The second offers an astonishing degree of textural clarity, as well as a strong sense of musical direction: this performance never lingers unnecessarily.

Therein, though, lies its biggest problem. An overwhelmingly colorful sonic spectacular this second movement may be, but it lacks any larger sense of style, personality, or depth. Perhaps this is a matter of Dudamel glossing over the tunes and quotations Ives used that might be archaic today; maybe it’s something else. Either way, this is a reading that lacks the emotional weight of a Michael Tilson Thomas, Seiji Ozawa, or Leopold Stokowski interpretation.

Most disappointing is the finale. Here, tempos are again too swift when they needn’t be, balances are a bit off (the percussion battery’s too present in the mix), and the sense of spiritual mystery is completely absent at the chorus’s climactic, wordless hymn before the end. Again, this last is largely a matter of tempo and feel for style: Dudamel wastes a well-directed instrumental developmental section (featuring some stunning brass playing) by rushing through the ensuing transition and then flying into the choral reprise, too loudly. Thus, one of the most visionary moments in the symphonic canon is robbed of any feeling of wonder or revelation.

It makes for a disappointing conclusion to the set. Happily, the three preceding symphonies fare better.

Dudamel’s take on the Third is largely wonderful: beautifully played, exquisitely balanced (the thick string writing at the beginning of the finale is incredibly clear), and oftentimes quite characterful (especially over the latter two-thirds of the central “Children’s Day” movement). The only flaw is the conductor’s pushing too hard through the first movement’s apotheosis – but, given all that goes right here otherwise, that’s a small complaint.

If Dudamel’s account of the Second isn’t quite as earthy or intense as Bernstein’s flawless second recording of the piece with the New York Philharmonic, there’s still a lot going for it. The LAPO’s playing is warm and directed, lyrical when called for, always rhythmically tight (the second movement’s climaxes really snap). The slow movement is highlighted by some gorgeous solos and, while the finale’s coda is a hair frenetic (and the concluding trumpet “Reveille” doesn’t jump out as much as one might like), the first four movements are undeniably stirring.

Best, though, is the First. Written when the composer was a student at Yale and often dismissed as a juvenile effort, here it sounds as fresh, original, and bizarre as any of Ives’s later symphonic efforts.

Dudamel and the LAPO draw out the score’s obvious allusions to Dvorak, Brahms, and Tchaikovsky. But they also revel in its quirks: the sudden shifts of tone, texture, meter, and mood; the dizzying, brilliant handling of the orchestra; Ives’s penchant for breathless counterpoint and sheer unpredictability, among them.

The result is as spectacular and virtuosic a take on Ives’s Symphony no. 1 as I’ve heard: the whole thing comes across as a knowing compendium of the 19th-century symphony by a composer with very clear ideas about what he thinks about the genre and what he wants to do with its conventions, be that to knowingly embrace them, deflate them, or so much in between.

As with Beethoven, then, all of the singular characteristics that made Ives Ives were present from the start. While this set doesn’t fully capture the marvel of his most mature effort, it does better than not with the rest of his symphonies, especially his earliest.