Marked by a blended mastery of multiple genres — from jazz and R&B to hip-hop — Dinner Party is a perfect album for a time of pandemic, police brutality, and an uncertain future. 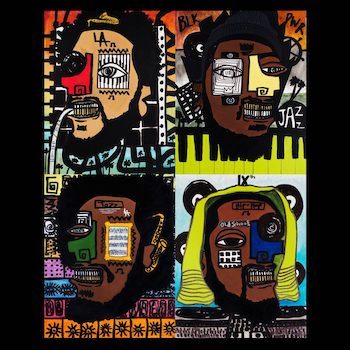 Just over a month ago, Dinner Party released their self-titled album. Technically, it was their debut as a collective, but to call any output from a group composed of Terrace Martin, Robert Glasper, Kamasi Washington, and 9th Wonder a “debut” feels a little disingenuous. Each has had an illustrious career working both in the spotlight and behind the scenes, as has Phoelix, who is not technically part of the group but contributes vocals on four of the album’s seven tracks. Based on name value alone, one might be expecting epic songs, filled with solos and moments of individual brilliance, from such a formidable group of creatives. But, on Dinner Party, restraint is the name of the game.

That restraint might be disappointing to fans of the artists who make up Dinner Party, if they bring their preconceived notions to this outing. After all, Washington did put out an almost three-hour-long album in 2015. Glasper understands these expectations well, stating in a recent interview “When you get us together, people expect it to have a lot of shit happening.” But forget the names behind the project, take it as it is, and you will be delighted. Marked by a blended mastery of multiple genres — from jazz and R&B to hip-hop — Dinner Party is a perfect album for a time of pandemic, police brutality, and an uncertain future. It is simultaneously escapism and protest. As Glasper describes it, “It’s a protest album but also not, you can listen to it and not feel like you’re watching the news.”

The first song, “Sleepless Nights,” is soaked in an ethereal optimism, a hopefulness delicately balanced with melancholy. As is the case throughout the record, Phoelix opts here for simple refrains rather than fully fleshed verses and choruses: “Cloudy days, sleepless nights/I lay awake, tossing, wondering when we’ll get it right/We’ve been down, for so long/Know change been on the way, ain’t worried no more/Know we coming.” The production is echoey, featuring synth and some sort of a high-pitched chorus, as well as Washington on sax and Glasper on keys. Via pertinent lyrics and spacious beat, Dinner Party acknowledges the struggles of being Black in America while indulging in an idyllic vision of brighter days to come. The track’s companion music video tangibly envisions this idealized future, placing itself solidly in the tradition of Sun Ra, George Clinton, and other contributors to afrofuturism who have drawn on sometimes goofy, outlandish imagery/mythology to turn fantasy into a valuable form of protest. In the video, the band’s four members hurtle through our solar system before landing their spaceship on Crenshaw Blvd. in L.A., where they perform a concert with vibes so entrancing that the entire neighborhood gathers to celebrate. When hostile cops come to break up the party, the music transforms into a protective force field. Sun Ra, George Clinton, and other contributors to afrofuturism have drawn on imagery/mythology this goofy to turn fantasy into a valuable form of protest. “Sleepless Nights” and the accompanying video are powerful reminders of that tradition of wistful dreaming.

“Love You Bad” features a groovy beat driven by pulsating keys and a sturdy bass line, as Phoelix sings in a soaring falsetto, “And I just wanna love you bad.” “From My Heart and My Soul” continues similar vibes with another strong, but sparser, beat. Here Phoelix’s hums and wails evoke D’Angelo almost to a tee.

The fourth track, “First Responders,” is appropriately titled. Amid a rising and falling vocal sample, repeating horns and  glistening bells sound. The instrumental has a siren-like quality, though the effect is calming rather than alarming. Moments of tension and frenzy are scattered throughout the track via a series of short sax solos.

“The Mighty Tree” is spacious and soothing, while the heavy vocoder effects on “LUV U” offer the clearest evidence on the album of Glasper’s influence.

But on an album packed with valuable songs, “Freeze Tag,” the album’s penultimate track, is far and away the best. Initially, it appears to be about celebration. An amalgamation of powerful bass hits, hi-hats, and guitar strums give the track an infectious momentum, while Phoelix’s tenor voice is reliably smooth and relaxed. It feels like a terrific party song, one you can’t not dance to, until you realize the central theme is a traumatic interaction with police: “They told me put my hands up behind my head/I think they got the wrong one….Then they told me if I move, they gon’ shoot me dead/But I think I’m ’bout to cut a rug.” “Freeze Tag,” is the powerful center of Dinner Party, probably because it is emblematic of the group’s greatest strength: the members of Dinner Party are masters of duality. On “Freeze Tag” Martin, Glasper, Washington, 9th Wonder, and Phoelix coax two opposing emotions — unfettered joy and life-threatening fear — into musical coexistence.

Even when Dinner Party is at its most carefree, the trauma Black Americans live from day to day is never far out of reach. The police show up in the video for “Sleepless Nights,” they are alluded to in the title of “First Responders,” and they return at their most violent in “Freeze Tag.” Yet, the songs themselves consistently offer up a space for happiness and freedom, for dancing and vibing. Dinner Party insists on fun as an indelible right without shying away from controversy, pain, or current events. As Martin puts it, “Let’s exchange information over something that could feed our soul.” And that’s what Dinner Party does — it creates room for genuine joy without ignoring the realities of our fucked-up world.