Though its prose veers into academic rough patches, the volume does what it sets out to do, brilliantly portraying how the delusive demon of meritocracy has led America into its current socioeconomic quagmire. 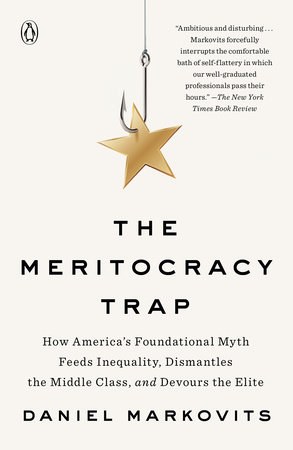 “Meritocracy has become the single greatest obstacle to equal opportunity in America today.”  With this statement, Yale law professor Daniel Markovits kicks off his book’s attack on meritocracy, which assumes that those with stellar educations and lucrative jobs are the most accomplished. For the author, that hallowed idea has become bogus. It was initially heralded in America as force that would dislodge complacent aristocrats by providing opportunities for the advancement of members of the industrious middle class. But now meritocracy “excludes the middle class from social and economic advantage, and at the same time conscripts the elite into a ruinous contest to preserve caste.” What was supposed to liberate American potential now painfully constrains it.

Markovits makes his case comparing and contrasting cases in history, frequently comparing Detroit suburb Saint Clair Shores with Silicon Valley hotbed Palo Alto. In the middle of the 20th century, he argues, towns across America were more economically homogeneous than they are now. Rich and middle-class citizens lived in the same neighborhoods, purchased similar goods; there was not a huge wage gap. The middle class was closer to the rich than the poor. But, as the 20th century waned, technological advances in automation, surveillance, and computing eliminated many middle-class jobs. Fewer but better-educated and better-compensated “superordinate” workers were put in charge of corporate operations. Meanwhile, their elite peers in finance and law exploited new money-making innovations — debt financing and leveraged buyouts among them — to orchestrate corporate raiding. As a result, middle-class jobs have increasingly disappeared; those in the few superordinate jobs are rewarded with astronomical incomes. Today’s middle class has more in common with the poor than the rich.

Consequences of this shift have been profound. Today’s elites inhabit entirely different spaces than their poor and middle-class counterparts: once equivalent, the median home price in Palo Alto is now approximately twentyfold that of a home in Saint Clair Shores. Elites have also developed different purchasing patterns than the classes below: the former indulge in luxury goods, health food, and fitness, while the latter increasingly consume thrift goods, junk food, and guns. Even life expectancy is assumed to be longer for the well-off.  More importantly, borrowing and indebtedness have become survival tools for the masses. Elites preserve their fortunes through lower tax rates and political connections to public officers and lobbyists – which increases class rancor. Still, Markovits argues that life is not all easy street for the wealthy. Competition for superordinate jobs is becoming increasingly fierce, often forcing individuals to work unbearably long hours doing uninspiring work. Many of today’s meritocrats have sacrificed choosing a vocational calling for income.

Education is the fulcrum upon which meritocracy hinges. Markovits details how entry into elite educational institutions allows children of means to outpace their mainstream peers in exponential fashion. The engine of success is made up of set maneuvers: a member of the elite picks a suitable and accomplished partner with whom to conceive children; their offspring go to chic preschools manned by educated and emotionally attuned professionals. These children enroll in tony primary and secondary schools (either boarding schools or public schools in affluent communities), then move into Ivy League or equivalent colleges. The goal is to reach a top-ranked professional school. Along with stimulating family interactions, an expensive cadre of supplemental coaches and tutors ensures the right outcome. The result is profoundly unequal: “Rich children now outscore middle-class children on the SAT by twice as much as middle-class children outscore children raised in poverty. The elite out-train the middle class by so much that depressingly few children from non-elite households overcome caste to perform at elite levels. Only about one in two hundred children from the poorest third of households achieves SAT scores at Yale’s median.” Markovits reasons that the excess investments in human capital demanded in this regimen are equivalent to a traditional inheritance of approximately ten-million-dollars per child. By making savvy educational decisions and shaping prestigious jobs around their training, today’s elites preserve their status. Unlike the days of the bygone aristocracy, their capital derives from labor rather than land. Exploitation, nevertheless, remains at the bedrock.

Taken macroscopically, The Meritocracy Trap is a jolting read that accomplishes many valuable goals. Most obviously — and with meticulous research, graphs, and tables – it undercuts America’s misconception that meritocracy is a positive social force. Indeed, when British sociologist Michael Young coined the term in his dystopian satire The Rise of the Meritocracy 1870-2033: An Essay on Education and Equality (1958), he portrayed the concept as a danger to social mobility (in 2001 he publicly lamented society’s embrace of it). In addition, unlike previous studies that implicated race and gender as inhibitors to social mobility, this book squarely assigns blame to income inequality.  By arguing through both economic and historical lenses, Markovits avoids reducing the problem of meritocracy to narrow academic issues, or “testocracy.”

Closer analysis, however, offers some discomfort. Markovits seems to equate the plight of elites with that of the middle class, and that feels grossly unfair. Yes, performing as an “excellent sheep” at a premier college, toiling in a profitable career (in some cases forsaking a rewarding vocational calling) may generate psychological anomie. Problems of these sorts, however, are far less acute than what ensnares the middle class: the higher divorce rates, opioid crisis, out-of-wedlock childbirths, lower life expectancies, and sporadic but mediocre employment. And keep in mind that the middle class have no way to escape the economic treadmill; superordinate workers can afford to pause their careers and reevaluate if necessary.

Nor does elite training always amount to a “wasteful and destructive arms race” in which young adults are shaped to obsess for success. Often, the privileged get breaks. As Daniel Golden has argued in The Price of Admission, elite university administrators routinely curry favor with wealthy donors and moneyed families when it comes to admitting their academically subpar children. Also, sociologist Lauren Rivera has shown that prestigious consulting firms primarily seek job candidates at elite universities who have refined and costly extracurricular activities on their résumés. When badges of class trump academics in the undergraduate hiring process, it is clear that socioeconomic status, as much as intellectual exertion, is in charge. 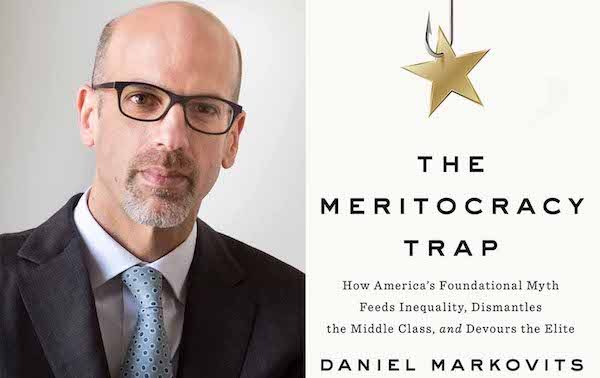 The book serves a number of absolutes as well. Markovits’s classes have ossified into “castes” locked in a “maelstrom of recrimination, disrespect, and dysfunction.” Elites in his Yale world feel pressured to pursue management, finance, legal, and medical careers in order to preserve lifestyle. Those who end up feeling trapped in the system – perhaps MAGA proponents – lapse into nativism and a yearning for false prophets to help them escape the reality of a stark future. In truth, there are plenty of ambitious nonelites who strive in vain for success, just as there are one-percenters who derive joy from work outside elite professional services. Self-made individuals still exist in society as well. One topic conspicuously absent in Markovits’s analysis is the proliferation of well-paid technology jobs.  Perhaps this was an oversight, but many of today’s young technology workers are alumni of public universities with strong engineering programs. Of course, paying close attention to this would have undermined Markovits’s claim that elite education is imperative for social mobility.

In trying to prove his claims, Markovits displays a preference for citing economics papers, newspaper articles, and think tank statistics. Such data is crucial for supporting his argument, but it tends to overlook nuances and lived human experiences. As for college education, Markovits notes that elite schools invest more per student and points out that most students are well heeled. But he does not articulate what is qualitatively better about this educational experience. Nor does he address the emotional burdens on students from financially feebler families who attend universities. Sociologist Anthony Jack regrets how “privileged poor” and “doubly disadvantaged” students struggle to survive at elite colleges. While those in the former group have been socialized to embrace elite culture through prior socialization, many of the latter feel isolated on prestigious campuses. Obtaining meals during school holidays and paying for pricey extracurricular activities is beyond the reach of many of these students. By examining a broader student sample, anthropologist Caitlin Zaloom has proven how a matrix of government-sponsored institutions, university offices, and profit-seeking firms make up a “student finance complex” that bind middle-class children to their parents through debt acquisition well into adulthood. Of course, staving off debt can send educated working-class students into undesired careers.

Finally, if “merit is a sham,” as the author claims, then he ought to suggest an alternative filter to meritocracy. (Psychologist Angela Duckworth, for example, suggests considering “grit” as an alternative.) But Markovits only suggests two corrective measures. The first, which entails doubling the number of Ivy League students and requiring that half of each incoming class hail from the bottom two-thirds of the income distribution, barely combats the current problem. Under this regime, approximately 21,500 additional students would be admitted to the Ivy League. Yet over 2.2 million students in the high school class of 2019 took the SAT and nearly 1.8 million sat for the ACT. Under the best-case scenario, this fix would expand the student body at Ivy League schools by just over 1 percent (perhaps by 2-3 percent if one includes similar caliber schools as the Ivy League), and that would barely begin to democratize educational access. Markovits’s second suggestion, eliminating the cap on the social security payroll tax and offering wage subsidies to employers who hire middle-class workers, sounds encouraging.

Had Markovits suggested more incisive solutions, his book would have had much more import. A number of key actions come to mind. Most salient of these is to end preference for wealthy and legacy admissions in elite American universities. No other country on earth has colleges that practice such overt gestures of privilege — and that includes Oxford and Cambridge. Related to this issue would be for the country to more generously fund public education, both at the tertiary level and below. Over 70% of American college students are currently enrolled in public colleges; many of our school districts deserve far more skilled and better-paid teachers. Furthermore, determined action from the Department of Housing and Urban Development (HUD) to constrain exclusionary zoning would help stymie economic stratification within public schools. In terms of the ladder of work, increasing access to internships — via the Department of Labor together with select enterprises — would encourage students to discover meaningful vocations and reward learning. Funds for implementing these practices could be drawn from reallocating a portion of federal tax revenue, imposing a wealth tax, or providing student-debt relief. Surprisingly, Markovits does not endorse such progressive policies in The Meritocracy Trap — though they would enhance social mobility and reduce income inequality.

Despite meritocracy’s malignancy, Markovits insists that “people are more benign than the common view supposes.” The optimist in me hopes this is true. A politically active upper middle class on America’s left and right — from MoveOn supporters to recent Tea Party advocates — is agitating for change. Many are well-connected, civic-minded professionals who seek genuine transformation of a tragically unequal situation; they are the book’s target readership. Though its prose veers into academic rough patches, the volume does what it sets out to do, brilliantly portraying how the delusive demon of meritocracy has led America into its current socioeconomic quagmire.