You are here: Home / Music / Classical Music / Opera Review: A Major Opera by Donizetti — Heard for the First Time!

One of Donizetti’s strongest and most original works, has finally been reconstructed and recorded by superb forces under the remarkable Mark Elder. 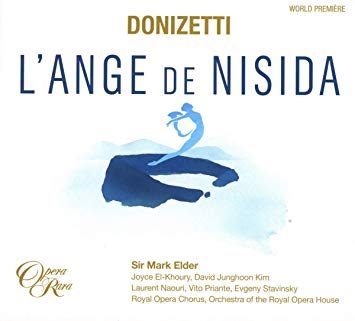 From the first notes of the orchestral prelude, played with much character and sharply profiled rhythm by the Covent Garden orchestra under Mark Elder, this recording announces itself as a major event. (That impressive passage also launches the three-minute trailer for the recording on YouTube.) Thanks to the determined efforts of numerous scholars, and especially Candida Mantica, a doctoral student at University of Southampton, a major Donizetti opera that never reached performance during the composer’s lifetime has now been reconstructed and recorded by performers extremely well suited to the task. (The recording can be purchased on CD or heard at Spotify and other streaming services; YouTube has it as well, broken down into dozens of short segments.)

Some of the music in L’ange de Nisida may prove familiar. The work was initially commissioned for a new opera house in Paris — the Théâtre de la Renaissance — that aimed at putting on French-language operas that 1) were less lengthy and used fewer soloists than the grand operas being performed at the Opéra and 2) were sung-through, unlike works at the Opéra-Comique (which were generally required to use spoken dialogue). The new house had quite a success with a French-language production of Donizetti’s Lucia di Lammermoor. But it went bankrupt before it could mount his (mostly) new-composed L’ange de Nisida.

Undaunted, Donizetti recycled many of its musical numbers in other operas, though often reworking them substantially. Long stretches, including two multimovement duets for the leading female and male characters (Sylvia and Leone), ended up in La favorite, adjusted to suit that work’s mezzo heroine. And the comic aria for Don Gaspar, in Act 1, got recycled for the title character in Don Pasquale. Fascinatingly, large portions of the opera had been drafted five years earlier to an Italian comic-opera libretto (now lost), Adelaide. All of this and more is laid out, with much musicodramatic insight, in booklet essays by Roger Parker and Mantica. The present edition includes some short passages (about 3 percent of the whole) that have been newly composed by Martin Fitzpatrick, who also completed the orchestration of some other passages. The results are seamless to my ears. Fitzpatrick also cobbled together the aforementioned prelude to Act 1 from tunes in this work and La favorite. The scholarly team allows that future performances may want to omit it and begin directly with the introduction to Act 1, or substitute some other prelude by Donizetti.

The plot involves the king of Naples; his mistress, the Countess Sylvia, who is living on the nearby island of Nisida and is praised as an “angel” by the populace there; the exiled soldier Leone; and the king’s chamberlain Don Gaspar, who tries to placate as many people as possible by arranging a marriage between Sylvia and Leone. The work mixes comic and serious elements in an unusual way. Whereas other semiseria operas, such as Bellini’s La sonnambula, have scary developments that get straightened out in the end, L’ange ends with the death of the heroine, and the comic element is concentrated in one character, Gaspar, whose well-intentioned or perhaps cynically self-serving, machinations backfire.

The structures of arias, duets, and scenes often push beyond the norms established by Mayr and Rossini and still followed rather strictly by Donizetti earlier in his career. Parker’s essay draws attention to the many orchestrally accompanied sung conversations between various characters and suggests, plausibly, that these are among the most forward-looking features of the work.

Parker’s point about the sung conversations is put nicely into practice by the cast, who all seem to know the meaning of the words that they are singing. Their French pronunciation is generally good, though best of all is, naturally, enough, the one Frenchman, Laurent Naouri (as the conniving Gaspar). In purely vocal terms, Naouri’s voice by now (he is in his mid-50s) has a noticeable beat on some long notes. But this hardly mars his reading of the role, which shows immense involvement. David Junghoon Kim sings marvelously as the exiled soldier Leone de Casaldi. His voice is sweet yet compact and forceful, a delightful combination; I look forward to encountering him in other works.

Joyce El-Khoury, whose debut solo-aria CD I admired unstintingly, gives her all as Countess Sylvia de Linarès, mistress to the king of Naples. I sometimes pick up hints of a widening vibrato on high notes (loud or, more surprisingly, soft). I hope she’ll attend to this, because in other respects she is a most finished and admirable young artist. Baritone Vito Priante is suitably elegant and determined as the king, and bass Evgeny Stavinsky is darkly sonorous as the Monk and the Father Superior, though sometimes just a little thin on the lowest notes.

The recording expertly blends two live unstaged performances at the Covent Garden house in July 2018. The voices never cover the orchestra nor are they covered by it. Elder shows how adept and alert he can be with a score that must have been largely unfamiliar to most of the players and singers. Particularly involving are the three big ensemble scenes (two in Act 2 and the one at the end of Act 3), each of which has its own clear shape, combines and recombines four or all five of the soloists plus chorus in fresh ways, and makes distinctive musicodramatic points.

In short, a major Donizetti work is here reclaimed for music lovers. In September, it won the award in Germany’s “Oper!” competition for Best Complete Opera Recording. This Angel is winging her way onto my “Best of 2019” list.