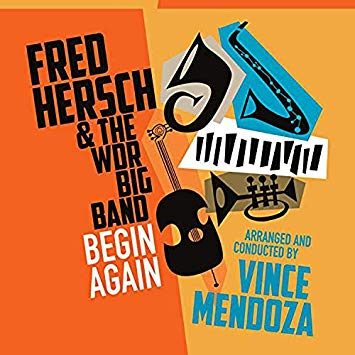 There are nine compositions on this new disc of Fred Hersch compositions played by the pianist and the WDR big band. He had previously recorded all but one, so one of the pleasures of this set for collectors (such as myself) is that one can compare Vince Mendoza’s skillful, subtly colored arrangements to Hersch’s original recorded performances. For instance, dedicated by the composer to Robert Schumann, Hersch’s restless “Pastorale” is found on Fred Hersch Solo. As the title suggests, it’s mostly a gentle piece, its rippling phrases suggesting to this listener a gently flowing stream. On Begin Again, Hersch’s tempo is a little faster when he plays the initial chorus. Then the big band takes over, with the theme played by (mostly) low brass in a gradual crescendo that mimics Hersch’s improvisation. The pianist returns, playing with the same mild insistence, though sounding to my ears more like Bach than Schumann. As Hersch falls silent, the winds play formal sounding half notes.

On Thirteen Ways, Hersch’s “Out Someplace (Blues for Matthew Shepard)” begins eerily, with what sounds like a bow drawn along the edge of a cymbal. Hersch enters with tentative notes that seem slightly desperate to assemble themselves into the blues advertised by the title. On clarinet, Michael Moore plays the melody with the same reticence. On Begin Again, the opening sounds strikingly similar, with quietly shrieking overtones played over a spattering of single notes accompanied by unrelated clusters by Hersch. Eventually, the woodwinds come in and play the melody in a loosely swaggering way. After some time a powerful crescendo from the brass arrives. Suddenly, the piece sounds like a score for a melodramatic film. It’s a fascinating transition. Mendoza manages to capture both the tentativeness of the piece and its surprising evolution into assertiveness.

“Rain Waltz” must be a favorite of Hersch’s: he recorded it on Heartsongs, on Fred Hersch Trio +2 and, with a vocal by Janis Siegel, on Short Stories. Here the low brass states the first section of the theme and Ruud Breuis on trumpet takes a quietly relaxed solo.

Throughout Begin Again, the soloists, such as Johan Hörlen on alto, are exemplary. The arrangements are subtle while still making effective use — as in the final choruses of “Rain Waltz” — of the power a big ensemble offers. The new rendition of The Big Easy (recorded earlier on Trio: Live in Europe) begins with the merest hint of a New Orleans strut. It stresses the easy part of the Big Easy … until the entrance of trombonist Ludwig Nuss. Drummer Hans Dekker contributes an occasional press roll; Dekker is also featured on the appropriately rushed “Forward Motion.” This big band version lacks the playfulness of Hersch’s recording of the tune on Forward Motion, in which it was the title cut. But the intent of this adaptation isn’t so much to celebrate Hersch’s remarkable pianism, his ability to play lyrically while at the same time providing swinging forward motion. Mendoza’s colorful arrangements give us a welcome new way to appreciate Hersch’s impressive creativity — his amply satisfying accomplishments as a composer.