You are here: Home / Books / Book Review: “The View From Flyover Country” — Sounding the Alarm

If you want to understand what is going on in the United States today, journalist Sarah Kendzior is a good resource. 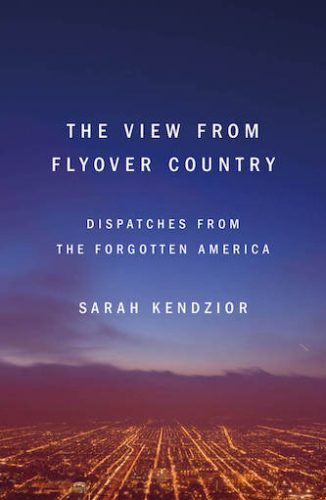 Sarah Kendzior is a distinctive voice in journalism. She has a PhD in Anthropology. She has studied authoritarian regimes. She is known for having predicted Trump’s rise to power. The View From Flyover Country is a collection of essays written between 2012 and 2014, many of which were penned for Al Jazeera and were originally posted online. Kendzior has a wide range of interests: the media, higher education, race, and the economy. As a political thinker, she should be seen as a strategic analyst in the mode of Naomi Klein, who explored in The Shock Doctrine the ways those in power use crisis to advance their own self-advantageous agendas. Kendzior’s essays, taken together, explain how we got ourselves into our current crisis.

Kendzior traces the election of Trump back to the Bush administration. In an essay called “Iraq and the Reinvention of Reality” Kendzior reminds us that, back in 2002, in what the White House called “the roll-out” of the war, Karl Rove insisted “We’re an empire now, and when we act, we create our own reality.” That reality included the “fake news” of weapons of mass destruction in Iraq that did not actually exist. None other than Secretary of State Colin Powell made a presentation to the United Nations claiming such weapons did exist and were a threat to us and the world. Condoleezza Rice went on television warning of a mushroom cloud if we failed to act, and Dick Cheney leaked “proof” of such weapons to The New York Times.

In the years following the invasion and occupation of Iraq, we had reality television, Sarah Palin, and The Apprentice, a show that beamed the power plays of the decisive boss, Donald Trump, into the homes of 20 million Americans. Then, in 2015, Trump the celebrity found ready support for his populist message about making America great again. Kendzior explains why this optimistic rhetoric found so many enthusiastic adherents: many Americans had never recovered from the Great Recession of 2008 — they needed to blame someone for their misfortunes. Trump offered them Mexican immigrants, Muslims, Democrats, Hillary Clinton, and her husband Bill. At the same time, he stoked their fears of terrorism. Like Palin, he addressed this audience as the real Americans, the true patriots — they  were the victims of open borders, free trade, and identity politics. And he addressed their concerns about the “Swamp” Washington had become. “I alone can fix it,” Trump claimed.

Kendzior is from St. Louis, one of what Trump would call America’s ‘forgotten’ cities. Do you remember the Judy Garland movie Meet Me in Saint Louis? It came out in 1944 and was set at the turn of the century when St. Louis hosted the World’s Fair. She sings “Easter Parade” at the end. It was an upbeat movie about the time when St. Louis, like many other cities in America, was thriving. Now St. Louis is bedeviled by high unemployment and underemployment as well as underfunded, racially-segregated schools. Kendzior connects the dots between those stuck in low wage jobs working for McDonalds and Walmart and those who had been high income professionals and were now stuck in part time jobs in fields such as journalism, academia, and publishing, part of what she calls the post-employment economy.

From Kendzior’s perspective, most Americans, those Bernie Sanders would proclaim the bottom 90 per cent, are not in good shape. Millennials are graduating from overpriced colleges saddled with crushing debt. Mothers are forced to make impossible choices between taking care of their children and working to pay for daycare. College admissions are slanted toward the rich, as are internships, because the rich are the only ones who can afford to accept them. Poor people are blamed for their poverty. If they cannot afford to pay their water bill then, in the richest country in the world, they will be cut off, as they were in Detroit.

As someone who has studied authoritarian regimes, Kendzior appreciates the mechanisms in place here that allow for dissent: we have the ability to complain and to resist. She is hopeful that in the long run Trump will serve as a cautionary tale, an example of hapless misdirection. But she is concerned that the damage he is doing to the environment, the courts, and our standing in the world, will take years to undo.

The View From Flyover Country is well worth reading. I would also encourage you to follow her on Twitter @sarahkendzior. Here’s a recent tweet: “I’m sick of rapists and liars and traitors and kleptocrats and warmongers and white supremacists and the fact that all the descriptors in this tweet can apply to one person and he runs the USA.” Here is a thoughtful critic who knows how to sound the alarm.