These live performances give us the sound of Weather Report during its most celebrated years, and in fine renditions that are crisply recorded. 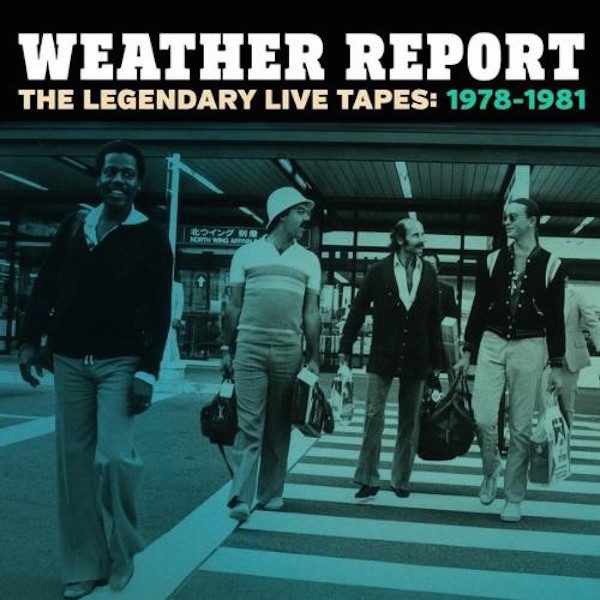 There have been few jazz bands like Weather Report, which Wayne Shorter and Joe Zawinul, both ex-Miles Davis sidemen, formed in 1970 in the wake of Davis’ explosive Bitches Brew album. According to drummer Peter Erskine, the two never talked much about the trumpeter and they were far from mere imitators. The first version of Weather Report, which included bassist Miroslav Vitous and percussionists Airto and Alphonze Mouzon,  put out the album Weather Report in 1971. It was a controversial disc: a friend gave it to me to test my tolerance of fusion. The album begins, uniquely in my experience, with blocks of wavering chords (produced electronically) that gradually fade to silence: these sounds made up the entirety of the tune “Milky Way.” If this was fusion, it was a new kind. The rhythm section finally arrives on the scene in “Umbrella.” Even here, the song’s ostensibly danceable beat is tossed away almost immediately. While Vitous plays around and about with the basic rhythm, Shorter seems to float over the band like a hovering bird. It’s as if the band wanted to suggest, but not indulge in, funk. Unlike the full-throttle take of the unmentionable trumpet player.

I heard this band in Ann Arbor soon after the initial recording. Live, they were loose and improvisatory, an ethereal jam band. We called the sound spacey then, in the footsteps of Herbie Hancock’s first electric band. Gradually, pianist Zawinul began to exert more creative control, both as a leader and composer. He was also interested, it turned out, in coming up with a funkier sound. He and Shorter decided to fire bassist Vitous. (A decade later, I talked to Vitous and he was still bitter that he wasn’t given a chance to contribute to the band’s funk groove.) In 1976, they found the bassist they were looking for in the virtuoso of the electric bass, Florida-born Jaco Pastorius, whose early career involved performing with hometown soul bands. He was not shy about his abilities: he liked to describe himself as the world’s greatest bass player.

The dramatic addition of electric bass Pastorius led to an even more energetic and daring Weather Report. Immediately the vibe of the band changed. When next I heard them live, they seemed to have pretty well ditched it initial minimalism: everything they played exuded a much more grandiose quality. Pastorius’s plangent notes, his impeccably timed sixteenth note flurries and his sometimes daring harmonic choices made the crucial difference. He was an irrepressible showman, sliding around the stage like a rock star while Shorter looked on quizzically and Zawinul buried himself behind his banks of electronic equipment. In 1977 they made their most famous recording, Heavy Weather.  Everyone quickly recognized the brilliance of its opening number, the cross-over hit “Birdland,” but there was also the beautiful ballad “A Remark You Made,” with its haunting melody. “Teen Town” showed what the greatest bassist in the world could do.

Before Heavy Weather hit the stands, drummer Peter Erskine was invited into the fold, creating one of the band’s most notable lineups. (Membership would expand to a quintet with the addition of percussionist Bobby Thomas, Jr. in 1980.) In Erskine’s autobiography, he sounds as if the job scared him to death. He had been playing with the big bands of Stan Kenton and Maynard Ferguson — and they were loud. Now he was expected to be even louder. At the first press conference that Erskine attended as a member of Weather Report, he was generally ignored until a kindly press person asked him about moving from big bands to Weather Report. Before he could answer, the perpetually grumpy Zawinul said that Weather Report was both a small and a big band. During the first weeks Erskine was in the band, Zawinul gave him a puzzlig reading assignment: Nietzsche’s Thus Spoke Zarathrustra. Erskine recalls, with amusement, that the Nietzsche that stuck with him was the philosopher’s infamous proclamation in Twilight of the Gods: “That which doesn’t kill you, makes you stronger.” But he still thinks he would have been better off studying the music.

Erskine was put in charge of putting together this new anthology of live performances recorded by the versions of Weather Report he played with: the quartet with Shorter, Zawinul, and Pastorius, and a quintet version when percussionist Bobby Thomas came aboard. The sources of the recordings are varied. Erskine obtained some tapes from a doctor in Thailand; one tune sat on a cassette he found in his closet. Most of the recordings were made by Weather Report’s sound engineer Brian Risner and they sound fine. Weather Report’s commercial recordings were made with plenty of overdubbing, edits, and sound manipulations. Sometimes a number began with music taped privately by Zawinul or Shorter. Those elaborate recording processes make these live recordings particularly valuable.

I think that this 4-CD set was rather a lark for Erskine to assemble. He repeatedly tells us he is taking the music out of the concert sequence; for once, he is in charge. There are solo features for the drummer and an astonishing eight minute solo from Pastorius. There is also a very touching version of the latter’s “Three Views of a Secret” during which the usually uncontrollably flamboyant bassist sounds both tender and vulnerable. His most harshly picked notes are approached via little hesitations — the technique makes each note sound like a discovery. Once Shorter takes over, we hear Pastorius in the background, contributing his characteristic rushes of sixteenth notes and then single wavering notes that sound like an invitation. The piece has, as its title suggests, more than one view: there’s an aggressive middle section that leads to Shorter’s solo.

The group’s occasional forays into tenderness are as impressive as its histrionics, and this gentleness has rarely been on display more effectively than in this collection, particularly in numbers such as “Forlorn” or “The Orphan.” The recordings are broken up into two discs featuring the quartet in 1978 and two by the quintet in 1980 and 1981. There’s a live version of “Birdland” by the quartet as well as an impressive piano solo by Zawinul in which he plays phrases from “Bess, You is My Woman Now” before settling on Ellington’s “Come Sunday” and “Sophisticated Lady.” He is joined by a lively Shorter, who is fierce and engaged on such uptempo numbers as “Sightseeing.” The third disc comes off as a kind of live performance commentary on the soon to-be-released 1980 album Night Passage.

The collection captures the sound of Weather Report during their most celebrated years, and in fine performances that are crisply recorded. The band fell apart when Pastorius’ bi-polar disease, which he self-treated in the worst possible way (with cocaine!), overwhelmed his life. (He would be beaten to death by an enraged bouncer. Odd though that finale is, his friends were not particularly surprised when it happened.) Eventually Erskine would quit the band because he was tired of playing so loudly. The drummer admits that he didn’t always like what the band performed live: the long, one-chord jams, for instance. He argues that the highlight of Weather Report: The Legendary Live Tapes, 1978-1981 is the band’s 20 minute version of “Madagascar.” He may be right about that, but I am just as intrigued by other powerful offerings here: the rough-and-ready intensity of “Sightseeing,” the sweetness of the ballads, and some the head-shakingly distinctive soloing.