You are here: Home / Books / Book Review: “Half an Inch of Water” — Nine Stories that Peer Memorably into Eternity

One of the hardest things to do as a writer of contemporary fiction is to create characters who are good. There’s no drama there, no sexiness, no moral jeopardy for the reader.

Half an Inch of Water by Percival Everett. Graywolf, 176 pages, paperback, $16. 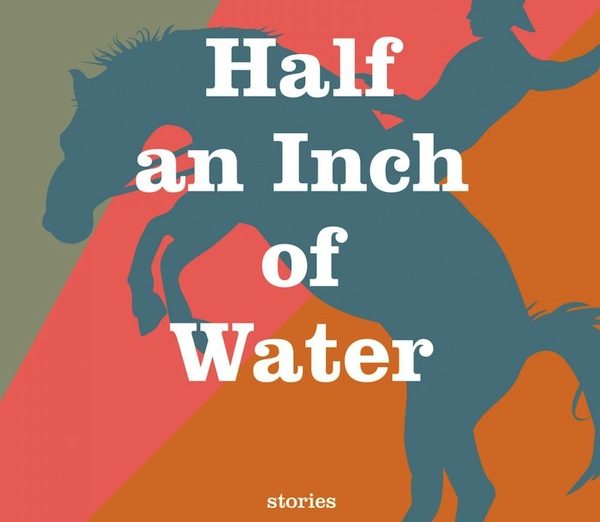 I’ll admit to being a bit flummoxed by Half an Inch of Water, Percival Everett’s fine new collection of stories. As I read this slim volume, which, I think, takes its title from a John Prine lyric (“That’s the way the world goes ‘round / You’re up one day and the next you’re down. / It’s half an inch of water and you think you’re gonna drown.”), phrases like “divine mystery” and “intercession of grace” kept popping into my head. Before you stop reading, I should say that what’s between the pages has less to do with the nebulous concepts discussed with such certainty in my Catholic school days and more to do with everyday collisions with the mystical or eternal.

The characters here are all ranchers and sheriffs and veterinarians living in the shoulderlands of Wyoming, where innocent happenstance can metastasize into peril for the simple fact that, at any given moment, scarcely another soul is to be found for miles. The subject matter and unadorned language here suited me just fine. Then, after researching the author, I learn that he’s enamored of experimental fiction. I began wondering if these stories were, in some way, a put-on. More on that later, but I decided not to let such considerations trouble me and instead gave myself over to enjoyment of these profound stories.

One of the hardest things to do as a writer of contemporary fiction is to create characters who are good. There’s no drama there, no sexiness, no moral jeopardy for the reader. Today, antiheroes hold sway. Conflicted types people our popular Cable television programs and literary and crime fiction. Worse, these representations get passed off as realism. While it’s true all of us are subject to temptation and competition and selfishness in general, most of us are trying to do the right thing. We’re flawed but working on it. The men and women in Half an Inch of Water begin to learn what is fine and good and upright in themselves, and this self-awareness is often earned by peering into eternity, whether it’s a mechanic finding a severed head in a box or an aged woman caught in a sudden storm while out for her daily horseback ride.

If you find all this “grace” and “goodness” business off-putting, rest assured that plenty menaces the characters in these stories. There are venomous snakes and drownings and drug traffickers. And there is the land itself, indifferent to Man, and full of the natural catastrophes that loom in any desolate place. A broken ankle or a visit by a suspicious stranger means something different in rural Wyoming than in Brookline, Massachusetts.

In two evenings, I ripped through these deceptively simple nine stories with their plainspoken prose and efficient pacing. Their elegance lies in the author’s ability to move easily among levels of abstraction—a sort of sleight-of-meaning. So that “Stone Fly” is about a boy trying to catch a legendary fish — but the spirit he is casting for is that of his dead sister. And “Graham Greene” is about a man trying to help an old woman find her son but it turns out that he has been the son she has been looking for all these years.

To me, “The Day Comes” is about as close to perfect as a short story gets. It’s a wonder of economy in characterization, scene-building, and plot movement. As in Dashiell Hammett’s work, the characters here are smart, and the author relies on the reader to be smart enough to keep up. We meet Howard Gunther, a middle-aged sheriff in a small town where nothing ever happens. His life stalled long ago — if it ever got started in the first place. He served in the Marines, was elected Sheriff, and has two children, but none of this gives him pride or purpose. In fact, for much of the story he feels so divorced from these biographical details that they might well belong to the life of another man. Gunther complains to his wife about his job: “I hate that all I do is put people I know in lockup for DUI.” But then his daughter gets in a jam and he’s surprised by his own reaction. And the thing is, in spite of his self-pitying angst, Gunther is a good guy. He admires his wife. He treats his greenhorn deputy with dignity, and he behaves gallantly toward the older woman who is the office secretary. Then he answers a call that changes his life.

You’ll have to read the story. I loved the way the opening scene is abruptly undercut. I loved the laugh-out-loud diner scene where Gunther has breakfast with his cronies. I loved the ending, which seems to be all action but is really about the Sheriff’s awakened sense of self. (And that deluge of rain that turns to snow! Snow cannot fly in a contemporary short story without it invoking, at least for a flickering moment, James Joyce’s “The Dead.”) I loved virtually every line of dialogue, terse and lifelike, full of subtext and misdirection. In fact, the dialogue throughout the collection is sharp and masterful. The characters talk past each other without acknowledging everything that’s said, and they make one gentle quip after another in the dry style of country people.

The epiphanies within these pages owe more to Flannery O’Connor’s work than to Joyce’s. The characters here are forced into them. In her essay “A Reasonable Use of the Unreasonable,” O’Connor defends her employment of violence in her work, saying that “violence is strangely capable of returning my characters to reality and preparing them to accept their moment of grace. Their heads are so hard almost nothing else will do the work.” Isn’t that true of us all? And her terrible vision of grace is manifest in this collection—the mystical rides in on the back of danger. But things are not all bleak. Most of the collection’s characters reveal themselves to be noble and generous and brave. Sometimes we quail in the face of danger but sometimes we don’t.

Percival Everett is a Distinguished Professor of English at the University of Southern California. He has won the PEN USA Center Award for Fiction and an Academy Award from the American Academy of Arts and Letters, among other major distinctions. He has written almost thirty books, including Percival Everett by Virgil Russell and I Am Not Sidney Poitier (about a character named “Not Sidney Poitier”). Perhaps it’s worth mentioning that the author is African American, if only for the fact that some of his other work concerns itself with race, a topic largely absent from these stories. If this collection is the product of some well executed thought-experiment by a virtuoso author, frankly, that doesn’t interest me much. I don’t want to accuse the author of disingenuousness but his oeuvre begs such skepticism.

Perhaps Everett set out to play with form but achieved something weightier. This got me thinking about the sliding boundary between irony and sincerity, between perception and authorial intent. Is there a vanishing point where an imitation gets so close to the original that they become indistinguishable? And consideration of what the author meant is only one (limited) aspect of the appreciation of literature. Works of art have their own lives. Here is the thing itself. What does it say to you? To me these stories say, we are all born with limitless potential and life is still full of mystery. To me these stories say, wisdom is the only worthwhile thing and the best we can hope for is to be gentle with one another. To me these stories say, the world will be yanked out from under you faster than a breath — what will you do then?