You are here: Home / Books / Book Review: “Erebus” — A Brilliant Hybrid That Bears Witness to Tragedy 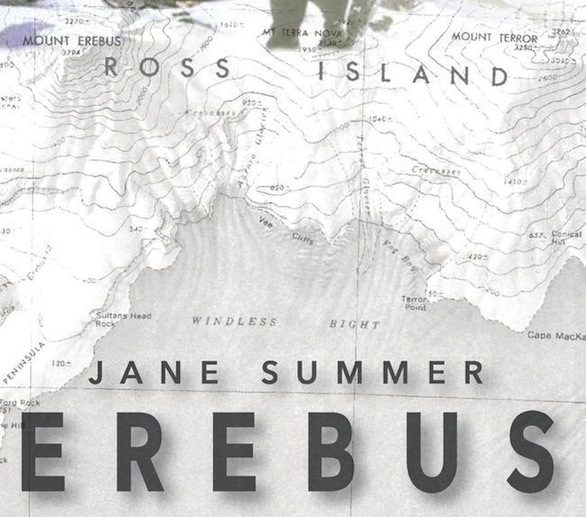 Once in a while a book crosses my desk that defies categorization. I felt that way when The New York Times sent me W.G. Sebald’s The Rings of Saturn, which I described at the time as “a dream you wished would go on forever.” It felt exactly like that when I first read it and my feelings for that beautiful hybrid of a book engendered an interest in everything Sebald wrote thereafter and anything that supports his notion that literature and fact and photographs and statistics and maps are inextricably intertwined and can be used to make literature.

So I am delighted to call attention to a new book, Erebus, which is classified as Poetry/Documentary. On the surface the volume is about a plane crash into Mount Erebus, the “southernmost volcano on Earth and second highest in Antarctica, on Ross Island” on November 28, 1979. But it is really a deep and rich meditation on what a plane crash means to those left behind and how they can deal with the shock and grief that inevitably follow, emotions which have become so public and thus all too familiar to everyone one of us in these last few years.

In this case, 257 people perished on flight TE901 while on a scenic excursion to Antarctica from Auckland; the trip was sponsored by Air New Zealand and was estimated to take about 11 hours at a cost of around thousand dollars in today’s currency. An event that had no precedent in that part of the world (Air New Zealand had an impeccable record) and that became etched into the memories of Australians and New Zealanders as permanently as the assassination of John F. Kennedy had in the northern hemisphere.

It begins in 2013 with the words: “Planes crash / Despite statistics / we’re not / dummies,” introducing us to the unique voice that propels this book — the voice of a dear friend trying to make sense not only of this unexpected crash, but also of her close friendship with Kay Marion Barnick, who was on the flight with her mother, a flyer named Marion Ruth Barnick. Bluntly, Summer draws us into this personal story, insisting that we, too, should be witnesses to all the lost possibilities in both those lives and to the author’s need to understand deaths that have haunted her for years, despite her family’s advice “to get over it.”

One of the things about writers is that they never get over anything, that’s why they are writers, obsessed until they can find a way to do justice to tragic events that other people find it easy to compartmentalize, forget, even shred so thoroughly that the occurrence might never have happened. That is why Summer is so appealing. Her courage in establishing an intimacy with the reader by revealing so much about herself endears us at once to her and to her task. As she puts together all the pieces that make the whole of Erebus we see Jane evolving from the girl who is told: You’ll never amount to anything unless you cut that hair of yours sit up straight wear a little rouge start dating men eat meat take dance class quit smoking call your father lose weight admit sooner or later your dog is going to die get contacts use fewer adjectives to the accomplished writer who has been able to marshal her complicated feelings and the sometimes slippery facts to tell this story in such an original way.

Born in the late fifties and the author of a novel The Silk Road (2000), Summer was only in her mid-twenties when her older friend Kay died. They were colleagues at a news publication and became friends at work: they both lived in Greenwich Village, where they walked and talked and ate out and went to performances and clubs. But it took her more than a decade and a fateful intervention before Summer knew how to follow the instructions that someone, maybe Kay, maybe her better self, maybe someone totally unconnected to this story, gave her early on: Don’t be afraid of who you are / Make the worst of what you’ve done luminous / Let no one live in oblivion.

In 1990 Summer was offered an assignment to Australia to pen a travel column with first-class perks from Air New Zealand and her American magazine. She suddenly found herself retracing some of Kay’s footsteps and realized that here, finally, was a way to write her way into understanding what happened on that terrible day back in 1979. The book is filled with all kinds of interesting facts: the origin of the word “Erebus,” Aristotle’s notion of what friendship means, as well as maps and trajectories and information about the skua gulls that populate Antarctica, snippets about Antarctic exploration (Scott and Amundsen — and other explorers, like Hillary and Mulgrew, the In flight Commentator of Flight TE901), the possible cover-up by Air New Zealand about what really happened, statistics about lift and gravity and flight, and all sorts of things that you may not have thought pertinent but that Summer makes pertinent to the story she has to tell.

For me, who has always been afraid of airplanes (my first novel, Boundaries, is about a woman widowed by an airplane crash), many of these facts were a revelation, especially the parts about the people who clean up the debris, including the human remains, from these terrible tragedies, as in this passage:

Some say no one / suffered more / than the recovery / team. / David Armstrong, then an air dispatch / warrant officer in the Australian army / who unloaded aircraft in Antarctica, / spent two weeks unloading bodies. / Armstrong developed a lifelong tremor / as a result of the task.

Material like this can often become maudlin and sentimental. But the way the book is organized, the presentation of the various typefaces to get the points across, the graphic layout, the inclusion of the charts, music, definitions, etc. all serve to enhance the story, so publisher Sibling Rivalry should also take credit for the powerful impact of this unusual book. But most of all, it is Summer’s even-handed presentation of her feelings, memories, wishes, and dreams, that give Erebus its urgency and relevance and sense of triumph at the end.

By taking her time and going beyond the limits of what we call poetry or fiction or even documentary, Jane Summer has created her own hybrid, which serves as a fitting memorial not only to Kay and Marion but to all those who died on Mt. Erebus. My hunch is that this book will be passed from reader to reader for a long time, for it will comfort anyone who needs to understand that the word accident, which Summer rightly parses, has reverberations for us all. More than anything I have read recently, Erebus reminds us that because we can lead more interesting, adventurous lives than our parents and grandparents through the technology available to us, we must also understand that the accidents that happen, and will continue to happen, are part of our own story, as well.