The two best black metal LPs of the past few months come from the Netherlands’ An Autumn for Crippled Children and Poland’s Behemoth.

An Autumn for Crippled Children and Behemoth could not have more disparate artistic visions of the black metal genre. The former favors a relatively progressive “blackgaze” style, a shoegaze fusion that was pioneered by France’s Alcest and was popularized last year in the United States by Deafheaven’s Sunbather (see Arts Fuse review); whereas the latter is good ol’, no-frills blackened death metal. However, both albums are the pinnacles of these two very different approaches, and they could well appeal to (and potentially convert) those not ordinarily enthusiastic about extreme music of this type. 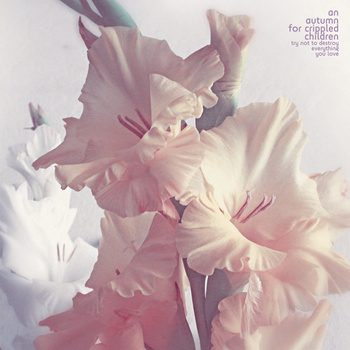 I’ve never really seen blackgaze as a subgenre to be taken seriously. It has usually struck me as little more than a gimmick: too often, bands in this style work with such a murky mix that details in the instrumentation are lost. The music is dulled to the point that the listener is left fighting stupor rather than trembling with anger or sadness. These bands also lack compositional adventurousness, usually relying on safe ambient textures to lend the music a superficial ethereal gloss, inevitably making the songs repetitive and tedious. But, for me, An Autumn for Crippled Children have effectively made good on the promise of this subgenre, taking far more compositional risks than their contemporaries and working with a murky mix as though it were an expressive instrument rather than a cheap aesthetic ploy.

First and foremost, this is the most lush-sounding metal record I have ever laid ears on. It kicks off on an almost outrageously gorgeous note with “Autumn Again,” whose intro is comprised mostly of bright, quasi-New Wave synth work over a driving drum line. Wretched vocals and guitar eventually enter the picture, but they don’t feel even remotely jarring – in fact, the guitar tones and playing throughout the LP are in some ways just as bright and soaring as the synthesizers. Orchestral strings (which may be synthesized, as well) come in for a brief interlude before the song explodes once more into a flurry of New Wave-inspired black metal.

The following track, “The Woods Are on Fire” is an even more uncompromising commitment to this style. The tune is pegged around a synth phrase that sounds as if it was pulled directly from a New Wave or glam rock song from the ’80s. About half the songs on the album boast attention-grabbing elements like this – the field recording and towering guitar slides on the title track, the pretty piano intro and full bass tone on “Sepia Mountains for Her Lament,” and the orchestral string sounds and booming bass drum kicks of “Avoiding Winter.” These accents make their respective tracks instantly memorable, but they also make the more straightforward compositions of the LP’s other songs, the ones that lack this sort of head-turning genre appropriation, come off as staid. Still, none of these more conventional exercises in blackgaze are sleep-inducing – even the most plodding, “Hearts of Light,” manages to be mildly engaging compositionally and potent emotionally.

A major reason this album manages to stay compelling all the way through is because its mix, while typically muddled, is selectively so. An Autumn for Crippled Children doesn’t give their instruments a homogenous treatment – the guitars and synth do tend to bleed together, but the orchestral strings, especially the piano are consistently crisp and contribute considerable body. Some might complain Try Not to Destroy Everything You Love is still too claustrophobic of a listen, and it’s unlikely to win over anyone committed to “real” Nordic black metal. But I find it to be beautifully arranged and performed: the LP could very well appeal to someone not well-acquainted with the genre. It’s definitely the high watermark of the ongoing blackgaze movement thus far.

Now, we move from one of the most progressive pieces of black metal you’ll hear all year to one of the least – Behemoth’s new album The Satanist. This is the band’s first album in five years and their first since frontman Nergal was diagnosed with, and subsequently managed to overcome, leukemia. Unsurprisingly, this ordeal has informed the group’s music, culminating in The Satanist, hands-down the group’s most mature and accomplished effort to date.

After a string of straight-up, furious death metal releases, Behemoth’s black metal roots return in this project in a big way. This is evident right from the opener, “Blow Your Trumpets Gabriel,” with a dark melody throbbing at the heart of its blast beats and tremolo guitars. What’s more, this song proffers one of the LP’s most beautiful moments with a coda that is laced with a glorious arrangement of horns. Behemoth has incorporated some pretty epic string and horn arrangements into many of these tracks — it is by far the most progressive element on The Satanist — and an incredibly exciting step forward.

We then get a couple of no-BS blackened death metal songs, “Furor Divinus” being the LP’s beeziest moment and “Messe Noire,” which is so intense that Nergal’s growling voice cracks. But then there’s “Ora Pro Nobis Lucifer,” whose leads and riffing reek of a classical hard rock influence. The band pulls this fusion off exceptionally well, making for an unlikely earworm – the only one on the album, really. But while only one song on this album might be considered “catchy,” every song here has something that makes it memorable. For “Amen,” it’s a particularly beefy bass part; for the title track, it’s the mounting tension of the intro and its brass-laden outro; for “Ben Sahar,” it’s again the hard rock grooves; and for the closing two tracks it’s their powerful spoken-word narration. The closing track also features some refreshingly harmonious backing vocals.

This is a beautiful, triumphant album, contrary to the negative stigma surrounding black and death metal. Many people will no doubt be turned off by the LP’s title, album cover, and the disc’s pervasive exploration of satanic themes. However, there’s nothing in the lyrics that suggest the tunes can’t be taken as a sort of allegory about human willpower as well as an appreciation and celebration of life. Nergal himself claims the latter is the central idea driving The Satanist. Thankfully, many listeners have gotten beyond the devilish surface: review aggregator Metacritic currently lists the album as the most acclaimed of the year, with a score of 92. It is fantastic that Behemoth’s work is receiving this level of recognition because The Satanist contains some of the most hopeful, even life-affirming, music you’re going to hear in the next few years. So what if it’s not “progressive?”