Given all the terror and brutality we have lived through just in the thirteen years of this new, 21st century, the story of people running drugs back in the ’70s doesn’t seem to have much urgency. 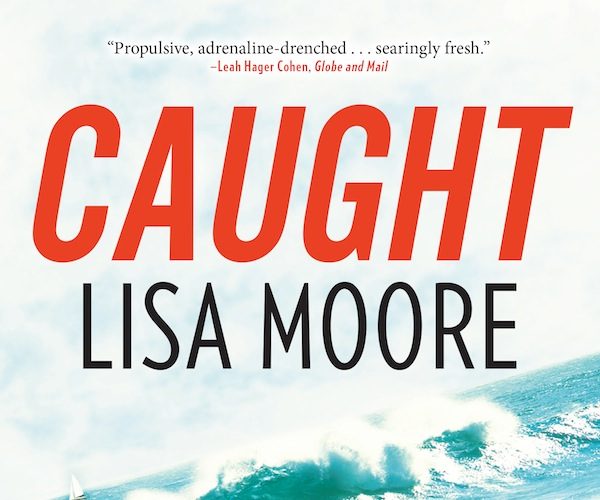 A few years ago I became acquainted with the work of a young Canadian writer named Lisa Moore and reviewed her moving novel, February, which was based on a real incident, the sinking of the oil rig Ocean Ranger in 1982. Her protagonist was Helen O’Mara, who was widowed by the unfortunate event and through whose mind most of the events were filtered. One of the things I liked best about it was that Helen’s memories and her present were continually bumping up against each other, creating a family novel whose mood and insights lingered long after I closed the actual book.

In her new book Moore has written a much “edgier” story, in today’s publishing parlance, but for me it simply doesn’t work as well as February. Caught is a chase novel, about a twenty-five year old named David Slaney who escapes jail where he has been serving a term for bringing two tons of marijuana into Canada and being discovered as he and his partner Hearn are hiding it. Now, after four years in prison, Slaney is determined to catch up with Hearn and do the job right. Described as “a modern day Billy the Kid” in the publicity material for this book, which has already garnered attention in Canada, Slaney is a man on the run, a man haunted by memories of his first love, Jennifer, and Hearn with whom he had a fierce, profound connection.

But the truth is that Slaney is not all that interesting. Moreover, he seems singularly naive after four years in jail, not realizing — as the reader soon does — that he is being set up at almost every stage of his escape. For Moore also gives us the story from the point of view of his pursuers, a cop named Patterson who needs a promotion, whose rebellious daughter causes his heart to ache, and whose handicapped half-brother (the child of his father’s mistress) needs better care. Thus, the reader gradually loses sympathy with Slaney and sides with the police as the chase progresses down to Mexico and Colombia, complete with all the stormy weather and heat and sex that comprise the sordid details of a drug heist in the late ’70s.

That may be the crux of the problem. Given all the things that have happened in the last forty years, all the terror and brutality we have lived through just in the thirteen years of this new, 21st century, the story of people running drugs back then doesn’t seem to have much urgency. Now marijuana is legal in Colorado, bringing in huge amounts of revenue and capturing headlines because of its medicinal value. Even if you transpose a drug chase to our present time and our increasingly urgent problems with heroin, a harum-scarum novel based on drugs seems dated.

Despite the clipped dialogue and the short sentences and the lack of quotation marks, all devices to speed the action and ramp up the urgency, Slaney becomes more distant as we read, and the people he encounters are no more than types, at times so vague they seem more setting than characters. Perhaps this novel could have worked better if Moore hadn’t tried so hard to make Slaney a mystery man, a legend. Here he is after finally making contact with Hearn on the phone and hearing that Jennifer got married in a passage that seems more notes than a finished piece of prose:

My God, Slaney said. The force of it. Slaney felt faint is what he felt. He slammed a shoulder against the wall and waited for the darkness in the periphery of his vision to clear. He looked for a chair but there was no chair. He needed to go home, to reverse everything. His equilibrium was askew. A surge of pain in the wrong places, limbs he didn’t have, his organs, his tendons. He didn’t know what he was feeling, queasy and unequal. He was unequal to this news, unable to believe it.

On the other hand, the cops — Patterson and his sting operation — become more real and far more compelling than the somewhat vague plans Hearn and Slaney have cooked up. It is also fascinating that because Patterson is supposed to be somewhat dull he is portrayed more honestly, with fewer tricks than Slaney and Hearn, in prose that draws the reader in. Where Slaney and Patterson interact as Doug Knight and Roy Brophy (their false names) there is a true sense of tension. Moore is also very good at pulling the past and present together with almost no transitions, and there are some passages as fine as anything she has ever done, as when Slaney recalls his parents buying the encyclopedia for him, their last son, the one who “was going to make things better.” And at times the dialogue and description merge in surprising, visceral ways. Here is Slaney finally meeting up with Hearn:

I’m sorry you went to prison, Hearn said. He said it in a flat voice and his eyes gleamed with tears and everything that had gone on between since they were kids seemed to be present in the room.

Hearn threw back his head and howled. An animal noise that came from somewhere deep. He stamped his foot three times to urge the whole weltering cry out of himself.

Or when he goes to a bullfight with his Mexican contact:

He loved that the fight was fixed. Every step planned and played out. Always the bull would end up dead.

It was the certainty that satisfied some desire in the audience. The best stories, he thought, we’ve known the end from the beginning.

Here is the key to the novel, for Moore has written about a man who is “caught” wherever he turns. From beginning to end. In his lingo. On his terms. And, clearly for some readers, she has succeeded. But at times I felt as if Moore was playing with us, trying out her skills, like someone would try a highwire act on promoters before getting backing for an actual performance. Such experiments can leave the reader with a faint unpleasant sensation (yes, think of bunsen burners in the chemistry lab) and that, I’m afraid, is how I felt when I closed this book.