Think of these novellas as variations on a common theme: a complicated world is scrutinized through the elemental viewpoint of one of the most memorable characters in American fiction over the past quarter-century. 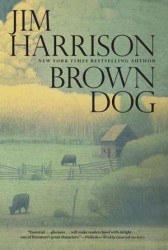 With a career spanning nearly half a century, Jim Harrison has remained a fixture of the American literary landscape, a writer who explores a distinct, rudimental ethos. One of his best-known characters is Brown Dog, first introduced as the eponymous hero in a novella included in the 1990 volume The Woman Lit by Fireflies. Harrison’s new collection Brown Dog compiles all five of the extant novellas dealing with the titular character (usually just called “B.D.”) plus a sixth, “He Dog,” published for the first time. B.D. is a salt-of-the-earth, half-Indian inhabitant of the backwoods of Michigan’s Upper Peninsula. In many ways, B.D. embodies the U.P. Harrison loves and the character best thrives when he is allowed to enjoy its bucolic majesty in solitude.

Anyone who’s not a fool should try walking in the woods on a cold night when the moon is full. That’s when I learned most of life’s secrets that I know. (from “Brown Dog”)

But B.D. is constantly pulled out of his sojourns by his own appetites and by forces out of his control. Women and drink are perhaps his two favorite pastimes, and his pursuits of the two often get him ensnared into dilemmas outside of his usual haunts. In other hands, this perpetual fish-out-of-water comedy would come off as cliché. But in these novellas Harrison masterfully satirizes the absurdities of modern life through B.D.’s grounded gaze. For instance, in “Brown Dog Redux”:

Now he was waiting for Deidre in a very expensive coffee shop in downtown Toronto in which he felt quite uncomfortable. He was nursing a three-buck cup of Americano, more than a six-pack of beer back in Escanaba where in some places a cup of coffee was still a quarter. He much preferred the diner with the red-haired mute girl near Gamebridge…

B.D.’s tenuous association with the Native American (Chippewa) community in and around the U.P. often exacerbates his pursuits of women and drink. Raised by his grandfather, B.D. is unable to pin down his exact heritage, but he is sympathetic to the minority cause. In “Brown Dog,” B.D. feels compelled to help hide the location of an ancient Chippewa burial ground from the pursuits of his girlfriend Shelley and her researcher friends. At times, the consequences of rebellion force him to go on the lam for extended periods of time. This sets up the typical Brown Dog struggle, where he is taken away from his simple life in the U.P. and must find his way back despite the odds. And that customary quest generates an enormous amount of enjoyment as we follow his interstate wanderings, rooting for B.D. to make his way back to the creeks, cabins, and saloons he holds so dear.

Of course, the way in which B.D. is pulled away from the U.P., repeated as it is throughout Brown Dog, feels at times like a static device. Think of these novellas as variations on a common theme: a complicated world is scrutinized through the elemental viewpoint of one of the most memorable characters in American fiction over the past quarter-century. B.D., to be sure, develops and grows over the course of the novellas: his increasingly serious pursuit of genuine love, and even a family, offers enough of a satisfactorily developing narrative to warrant reading each of these novellas. Still, B.D. remains firmly fixed in the context of natural beauty and simple desires. Harrison’s brilliance is best served by savoring each of these novellas for the taste they offer of his contradictory Americana, which draws no boundaries between the sublime and the self-indulgent. Only B.D. could somehow simultaneously muse on how “in a way you didn’t enter the woods, the woods entered you” and simultaneously be perfectly comfortable with giving biologists “the locations of bear and wolf dens in exchange for a six pack, or in the case of wolves, a whole case of beer.” (From “Westward Ho”)

In short, reading any of these novellas puts you in the presence of a character whose humanity contains the unadorned wit and innocence of Shakespeare’s Touchstone as well as the peccadilloes and calculation of a modern-day Falstaff. Harrison’s artistic achievement lies in skillfully imbuing B.D. with these seemingly disparate qualities in a way that never feels calculated or condescending. Brown Dog may not know (or care about) all of life’s secrets, or even of those of his forest, but loves those enigmas all the same. In an age of instant information and complicating (and complicated) pleasures, he speaks to the primal power of wondering about the mysterious and the sensual, of the fulfillment to be found in his philosophy of “just getting by.”