But Mr. Ho’s Brian O’Neill had another idea. What if he took the very inauthenticity of the original music as a motive for putting together things that were never meant to go together originally? Like Bach’s Toccata and Fugue with a Balkan beat?

For some of us, the very idea of Mr. Ho’s Orchestrotica seems like a bad hangover from the early ’90’s “lounge music” revival. Here was yet another take on the “exotica” tiki lounge music of the ’50s and ’60s—the small-group South Pacific mélange created by the likes of Martin Denny and Cal Tjader. It was intentionally inauthentic world music, before there was such a thing as world music, the kind of stuff created for a tiny umbrella lounge of the mind. It was perfect for ’90s irony and simple enough that untrained rock musicians could put it over. It was cheese on top of cheese.

But Mr. Ho’s Brian O’Neill had another idea. What if he took the very inauthenticity of the original music as a motive for putting together things that were never meant to go together originally? Like Bach’s Toccata and Fugue with a Balkan beat? And then find some musicians who could really play Bach and odd-meter, Balkan dance music? In other words, use the exotica idea—light and fun and sort of pop—to create real music.

Well, that’s my own interpretation of O’Neill’s intentions. As alter-ego Mr. Ho, O’Neill now has two albums, the vibes quartet record Third River Rangoon and the 23-piece orchestra disc The Unforgettable Sounds of Esquivel, both on his own Tiki Label and part of his “Exoctic Sounds for Modern Living” series. At the Regattabar in Cambridge, MA on Friday night, he brought the quartet, all in matching white, collared lounge shirts with a multi-colored pattern on one side. O’Neill—a well-schooled polymath percussionist on Boston’s world and jazz music scenes—presented the music with humor, calling the original exotica movement “a white man’s idea of exotic music” and conceding that the Orchestrotica was just another white man’s take—his. In this case, the music would take in various world and classical-music influences that were never part of the original tiki sound. The band’s playing, meanwhile, is deadly serious.

Sometimes the titles were self-explanatory: “Would You like Bongos with that Fugue?” was the previously mentioned Bach/Balkan mash-up. There were a couple of Tjader tunes but in updated arrangements with expanded harmonies. O’Neill, with flutist Geni Skendo, bassist Jason Davis, and percussionist Shane Shanahan negotiated fiendishly tricky 9/8 and 11/8 rhythms. Occasionally there were more familiar Brazilian and flamenco rhythms (and Tjader’s “Colorado Waltz”), and there were familiar tunes, like Manuel de Falla’s “Fire Dance” music. 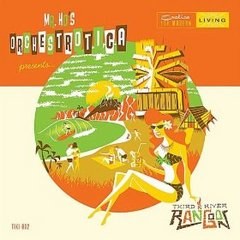 But as the evening moved on, the music became more and more its own thing, a kind of classical chamber music. Skendo played mostly bass flute, with its dark sonorities, as well as shakuhachi. (Skendo sort of embodies the state of world music today: an Albanian living in Boston who makes a specialty of that end-blown, Japanese instrument.) Shanahan moved among a vast array of hand percussion—frame drums, dumbek, bongos. O’Neill stuck mostly to vibes, despite one Brazilian percussion rave-up between him and Shanahan. Jason Davis, meanwhile, stayed with bass, with beautiful tone and time and one very lovely, high-lying bowed solo. Tev Stevig sat in for a couple of numbers on oud and tanbur.

The “classical” element emerged in the arrangements, often multi-section pieces rather than “tunes” played through with solos. Think of it as if the BSO Chamber Players could swing. By the end of the set, the band had offered elements of Shostakovich as well as an arrangement of Gershwin’s three piano Preludes. Although there was a lot of tinkering, one of those Preludes was played “straight,” as written. But on the whole, O’Neill was creating something new from his multiple interests. He described himself and Shanahan and Stevig not merely as collectors of instruments but collectors of sounds. That’s not a bad place for a serious composer to start. A new album is due from the Orchestrotica Quartet in November.