You are here: Home / Books / Book Review: “In the Land of the Living” — A Coming-of-Age Yarn Mixed With Grief

Austin Ratner’s follow up to The Jump Artist is an an exuberant, terrific novel—for its weaknesses, as well as its strengths. 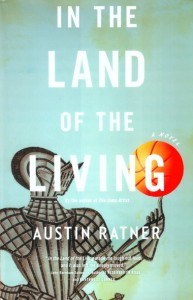 Austin Ratner is a talented, young writer in his early 40s whose first novel was a tour de force based on the life of the photographer Philippe Halsman, whom he allegedly discovered while trolling the web. It was called The Jump Artist and published by a small publisher, Bellevue Literary Press. Surprisingly, for it had stiff competition from books published by the “big” houses, it won the Sami Rohr Prize for Jewish Literature in 2011, a prize that alternates each year between fiction and non-fiction and is worth a whopping $100,000. Although Ratner comes from a wealthy, Cleveland real estate family and is not as dependent on the prize to live as so many other young writers might be, the Rohr Prize garnered him more attention than is usual for a first novel, and he was able to sell his next book, In the Land of the Living, to Reagan Arthur at Little, Brown. I might add—and good for them—that PW and Harper’s magazine had already chosen to showcase The Jump Artist before the Rohr Prize was given.

I loved The Jump Artist. It is sparely written and sticks to the historical facts about Halsman’s early life. Indeed, therein lies its strength: the narrative was ready-made and the tension comes from the dramatic, sometimes shocking story Ratner chose to tell. Moreover, it was a story most people don’t know, so it becomes a page-turner like any good mystery.

In this second novel, Ratner has a harder task, for he has no ready-made narrative. In the Land of the Living is, from what I have gathered in articles about Ratner, an autobiographical novel that stays pretty close to the story of his own life, and although there are brilliant parts in it, this novel is more uneven than his first. He has also adopted for the early chapters Middle English titles and has written some passages in a style that is jarring and somewhat silly in light of the gritty story of the protagonist’s grandfather. But if you can get through those strangely hectic and derivative early parts that seemed to me to have been too “researched” (there are whiffs of Henry Roth and Philip Roth and even Wallace Stegner when Isidore meets his wife), you will be rewarded, for the novel picks up after Isidore’s marriage and the birth of his son, Leo, who quickly becomes its focus.

Although every reviewer hates to give away the plot, I don’t feel that I am betraying Ratner by telling readers that Isidore, who became a doctor and more and more engaging as he found his place in the world, even if it was Cleveland, Ohio, dies and leaves a young wife and two sons, Leo and Mack. The details of Leo’s short childhood when Isidore was present in it are wonderfully precise and heart-rending as Ratner gets into Isidore’s head, his grief at leaving his little boys, and also Leo’s grief after Isidore dies. Here is Leo at 13 after cleaning out his room and finally dealing with the stethoscope, medical book, and pathology journal that [his father’s old friend] James Helpern had given him:

He hung his father’s old stethoscope in the closet next to the black belt and the rough red shirt. He took down the blue box from Higbee’s that had in it his father’s T-shirt (HARVARD in block letters like a crimson badge at the breast, armpits stained yellow with aluminum—he would go there someday, to Harvard or Yale), and he took down the jewelry box that held the hospital ID card and the merchant marine license. . . Leo opened the dusty medical book and saw where his father had written ISIDORE AUBERON, M.D. He stepped out of the closet and put the book on the shelf that had just been vacated by his Lego spacemen.

What must I do? Leo thought, giving a last look into the closet. What do you do?

That is the question Ratner poses for himself and tries to answer through the rest of the book, which is permeated by Leo’s sense of loss for his biological father. Even after his mother marries the very kind Philip, who comes from a very prosperous family, Leo can’t seem to get his bearings. Plagued by a child’s understandable sense that he is betraying his real Daddy as Philip becomes more and more the paragon step-father, Leo’s sense of loss only grows, for, as he reminds himself, “The past was not supposed to matter anymore, but it did.”

The novel then becomes a coming-of-age book with this extreme grief hovering over every page. Yet there is also a joyous, madcap undertow running through Leo’s memories as he matures. Among the most moving are the references to Anthony Newley’s famous musical Stop the World, I Want to Get Off and a repeated refrain from the song, composed by Newley, called “A Wonderful Day Like Today.” So although Leo goes through the pains and pangs of first love, surely an old story, Ratner somehow makes Leo’s story gather urgency, and it becomes, suddenly, fresh and utterly engaging.

About a third of the way through this novel, I realized that for all its mannerisms in the earlier chapters, this uneven book has parts that are truly wonderful, parts that are written by a writer who has a huge heart and is not afraid to take risks. Just the kind of ambitious novel I have come to love, and, in its way a much braver book than The Jump Artist.

In the Land of the Living comes to a hilarious and brilliant climax when Leo sets his sights on college in the chapter Ratner calles “Yalensis,” which made me laugh like I did when I was reading Goodbye, Columbus for the first time. A combination of Beckett and Mel Brooks, it defies any reviewer’s abilities to describe and is surely worth the price of the whole book, especially at the end when Leo has his epiphany and you realize that your laughter has turned to tears.

The last third of the book is a road trip taken by Leo and Mack and affects a reconciliation between these two brothers who see the world very differently and have had their problems. Although this part is probably very important to Ratner, it doesn’t work as well for me, but I am not a fan of road trips in general and probably one of the few people in the world who think On the Road is boring. I also thought the ending was rushed, as if Ratner had run out of steam, and would have been happier with more about the courtship of Leo’s wife than his travails with his brother, Mack.

No matter. This is an exuberant, terrific book—for its weaknesses, as well as its strengths. And when I read the cover material again at the end and was reminded that Ratner is a physician—like his dead father—as well as a writer, I thought, What will come next?

I will surely be watching.