You are here: Home / Books / Poetry Review: A Profound Respect for Place — Iraq and the Merrimack Valley

David Allen Sullivan has no combat experience here or abroad, but his verse offers a poignant vision of the sights, sounds, and passions of the Iraq War. Matt Kraunelis replicates the landscapes of his hometown, planting the reader’s feet firmly in the Merrimack Valley.

Every Seed of the Pomegranate by David Allen Sullivan. Tebot Bach, $16.

“Poetry can create opportunities for empathy and understanding; it is one way to re-see ourselves, and the ones we often see as the other.” — David A. Sullivan

The “Other,” or the perceived antitheses to our familiar selves, has been the subject of many forms of art, theater, and literature. British writer Joseph Conrad pioneered the political examination of “us versus them” in his novella Heart of Darkness by using Colonel Kurtz—an icon for white, imperial arrogance—as the exploiter of the native “savages” that inhabited the Congo. When Marlow encounters the disorientated Kurtz in the depths of the forest, the natives suddenly appear far less threatening and exotic than their “leader” gone awry.

In the wake of 9/11, many Muslims in America were stigmatized as jihadists. Ten years later, as American troops complete their withdraw from Iraq, domestic and international criticism paint a curdled image of the veteran, a figure defined by “PTSD and jihadism, xenophobia and patriotism.” David A. Sullivan’s Every Seed of the Pomegranate cuts through these one-dimensional portrayals by convincing us that, surprisingly, Americans and Iraqis share a number of similar concerns and passions. Each side has been dismissed as “an Other.”

The poem “Tareq Ayoub, Reporter” is generated out of gaunt imagery that makes you believe you’re at the center of the conflict. An Iraqi journalist and a family are crouching beneath a dark stairwell as wailing sirens signal a bomb raid. While waiting, Ayoub remembers a ritual where a man places seeds of a pomegranate on his tongue. The refreshment of that gesture represents the release from fear that Ayoub yearns for himself.

The visceral edge in the verse is surprising, given that Sullivan, a writing professor at Cabrillo Community College in California, is a self-professed non-veteran; he has never been to Iraq nor does he read or speak Arabic. In the preface, Sullivan notes that his Iraq War veteran students inspired his interest in how the conflict affected people on both sides. While at first they expressed “trepidation about how others might frame their experiences,” one Iraq veteran, Brian Turner, eventually became Sullivan’s literary confidant.

Thus Sullivan’s poems are rooted in an educated intuition of warfare. His language is sensitive enough to put us into the mind of a jaded, American soldier or an Iraqi schoolgirl. “Frames of Reference” is a haiku that nimbly illustrates the similarities of the American and Iraqi perspectives. The scene cuts back and forth between the Iraqi hillside and an American fireside with cinematic effectiveness. “Night Visions I” similarly ties together the experience of two fathers: one American, one Iraqi—each is consoling his child. Each caresses his child’s back in a circular motion, and in that act, “we are tied to each other.”

The only drawback to Sullivan’s resolve to capture the Iraqi experience authentically is the location of the glossary for the Arabic words used in many of the poems. Sullivan provides detailed notes at the back of the book, but some of the Arabic words cannot be gleaned from the context, so the flow of reading is interrupted. But that awkwardness does not cancel out the volume’s compelling imaginative power. Sullivan movingly does what Iraqi veteran Brian Turner encouraged him to do: “This war is being ignored by almost everyone . . . write if you’re called to write.” 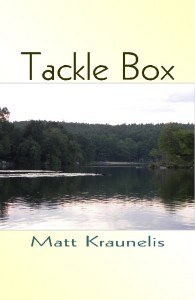 Sullivan and Methuen-based poet Matt Kraunelis are connected by a profound respect for place. Kraunelis, winner of several New England poetry awards and current deputy chief of staff at the Massachusetts Officer of Consumer Affairs & Business Regulation, has a deep affinity for the local, and his verse transports the reader to the poet’s beloved Merrimack Valley. Tackle Box is Kraunelis’s first book of poetry, and it is a pleasant collection that pays homage to the influences of landscape, particularly as a nurturing contrast to the urban. Kraunelis’ verse also refers to New England’s celebrated literary figures, including Robert Frost, Anne Bradstreet, and Jack Kerouac.

“Spring on the Merrimack” leaves the noise of the city behind and brings us to a serene scene on the banks of Merrimack River. The pastorale setting serves as a harbinger of renewal for what Kraunelis alludes to as the “tired mill city.” Angered by a recent scandal involving tax abuse and fraud by Lawrence Mayor William Lantigua, Kraunelis’s poem sees the river’s transition as the prefiguration for a new start: “cast[ing] a single stone for hope into a billowy pool of our own history.”

Kraunelis finds significance in the everyday, and this is what makes his poetry so immediately compelling. Even in “Café Sonnet,” which appears to be set in France, lust and the inevitability of a forbidden love rings with a familiar tangibility. Sorrow, joy, and regret are also emotions evoked in Kraunelis’s poems, and his ease in conveying these passions is a testament to his direct style. Tackle Box captures the sights and sounds of the landscape that shape Kraunelis’s identity, concrete connections with the natural that propel him to become an emissary for the place he loves.

Matt Kraunelis will be reading from Tackle Box on April 28 at Stevens Library in North Andover, MA. Check here for more information.