You are here: Home / Featured / Fuse TV Review: Netflix Keeps “Arrested Development” For the Sake of Our Sanity

Had Arrested Development been aired after the recession, the series’ chances for survival would have benefited from the nation’s need for a healthy laugh at a time of monetary meltdown. 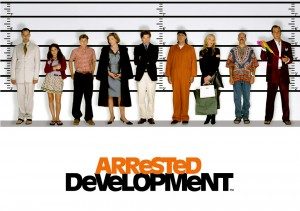 Those concerned for the fate of a program that singes the corporate, upper-class, American lifestyle be reassured.

Netflix InstantPlay has seasons one, two, and three of Arrested Development available for the growing number of online TV series viewers. The show’s first season aired in 2003 to an audience of a whopping 12 million viewers, yet those numbers, wide critical acclaim, and a promising first season were not enough to save it. Viewership soon trickled off, forcing an early end to the third season in 2006. However, word is out that season four filming has begun, and 10 episodes will be aired simultaneously on Netflix InstantPlay in early 2013. We can expect members of the original cast including Jason Bateman, Michael Cera, Portia di Rossi, Tony Hale, David Cross, Will Arnett, Alia Shawkat, Jeffrey Tambor, and Jessica Walter to don their crippling psychological issues once again, and those fans of homeland disjunction could not be happier that series creator Mitch Hurwitz has reunited a talented cast for a fourth season.

As with most successful comedy sitcoms, Arrested Development generates humor by finding the funny in the most irritating and horrifying parts of reality. After losing their fortune and credentials when George Bluth Sr. (Jeffrey Tambor) is imprisoned for a number of international housing development felonies, the Bluth family members must adjust to life without money in a model house eerily similar to Sadam Hussein’s. Michael (Jason Bateman), George Bluth’s son and the only morally sound member of the family, struggles to keep the family business (corporate or not) functioning reasonably. Michael has an intimidating line-up of crazies on his hands, considering his father’s reluctance to face the law, his sister’s marriage to a closeted gay man, his son’s lust for his own cousin named Maeby (who may be a product of his sister’s marriage?), and the collective immaturity of the extended family.

Arrested Development builds on the domestic dysfunction of Modern Family, adding in heavy doses of corruption, desperation, and extreme misbehavior. This is a family-owned corporation funded by the local banana stand, victimized by a seal who bites off a kid’s arm (at first, the only prosthetic he wanted was a hook that made opening his juice boxes easier), and a model home that sinks deeper into a cesspool with every flush of the toilet.

Had Arrested Development been aired after the recession, the series’ chances for survival would have benefited from the nation’s need for a healthy laugh at a time of monetary meltdown. Perhaps the poky turn of business has sparked the decision to reunite the cast six years later, to give its viewers a chuckle as they pick up the pieces of their shattered next eggs. Even more interesting is that this is a first, a new season of a cult TV series released through Netflix simultaneously. This paves a promising new path for online viewing. Why wait a week for a 22-minute sitcom to be available on your TV when you can watch it when you want on Netflix? With this technological step, broadcast TV will have its own version of Arrested Development to deal with.