You are here: Home / Books / Book Review Commentary: Pick Up the Tomahawk!

Book reviewing is at a crossroads. Major newspapers and magazines are cutting column inches devoted to the evaluation of books, while blogs and book review sites online raise issues of ethical standards and quality control. Where should those who believe in the survival of book criticism expend their time and energy? Can book reviewing be salvaged in the mainstream media? Or should those who care about criticism turn their attention to what can be done online? 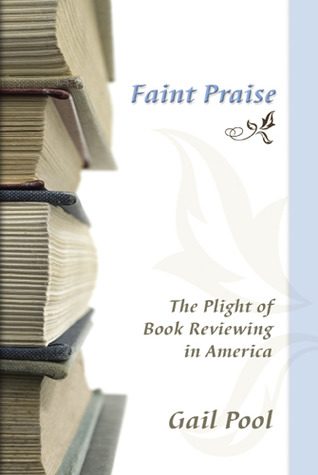 Gail Pool’s new book, Faint Praise, doesn’t offer a decision as to which way to go. But it provides an impressively sane examination of the befuddled state of book criticism. Among the volume’s virtues is a clear and balanced description of what reviewing, at its best, can and should be. (I will post an interview with the author late next week, along with my reactions to her ideas.)

Pool’s investigation of what makes for a superior book review is valuable because the traditional definition of serious journalistic criticism — independent evaluation — is disappearing amid the editorial meltdown, lost in a media world in which every aspect of the arts pages, including book criticism, is reduced to marketing. Future generations will conclude that a fan and a critic are essentially the same thing – after all, we are all enthusiasts

In his blog book/daddy, Jeremy Weeks admires Faint Praise’s analysis of book reviewing, but faults Pool for not coming up with solutions to the current crisis. He then gives some wrong-headed advice himself:

In any event, the newspaper book page is worth fighting for, worth arguing about like this, because the Big City Daily remains the only American medium dedicated to providing a decent level of professional book criticism from a number of sources addressing a general but local audience — and all for a pretty cheap price. Commercial TV and radio do nothing like book criticism, even public television and radio are pretty slack on the job. Cable TV — what conservatives believe has already removed any need for public TV — is mostly a joke. Magazines are too small in circulation, too narrowcast yet too scattered. Book blogs are a fascinating new medium but they are certainly preaching to the converted. As cumbersome and faulty and cozily middle-brow as the newspaper book page is, it remains one of the best efforts (one of the only efforts) to engage a city’s readers in a common discussion about books and book issues, to lead them beyond personal interests to something new or different in literature. The book page can also advocate for literacy and libraries and education — all the things that newspaper managements, if they had any brains, would see are vital to their own continuance.

Sure, the Big City Daily could and should generate serious talk about books and the issues they raise. By stuffing their book review pages with happy talk rather than challenging opinions, newspapers work against their long-term best interest. But editors aren’t taking book coverage seriously, and things are not going to change for the better. In fact, it is more likely the situation will get worse, even more homogenized. As they become blander and puffier, BCD book review supplements will lose what little credibility they have left –- readers looking for serious, spiky discussions of books are beginning to flock elsewhere, mostly to online blogs or zines. Those who want quick tips or cozy chat about what to read have myriad sites to check out.

Ron Stillman is right when he writes that “critical sites have grown on the web precisely because the institutional critical apparatus in this country is so sclerotic & inept. This is true of not just of newspapers, but of many academic journals as well. Nothing breeds mediocrity faster than the “consensus building” process of any refereed journal.”

Hounded by heavy economic and circulation woes, the BCD isn’t concerned about the quality or quantity of reviews. The goal is not to raise any hackles. When was the last time a BCD book review generated compelling talk about books and cultural issues? Why is the status quo at the BCD worth fighting for or arguing about? Why not devote our time and energy to establishing places that proffer genuine, rather than pseudo-, book reviews? How about exploring innovative ways in which such sites could raise revenue and pay reviewers for their efforts?

Weeks writes that book blogs preach to the converted. But what evidence is there that BCD book reviews do more than provide authors and publishers with blurbs? The statistics I have been seen suggest only a small number of readers view BCD book reviews posted online. Where is this common culture? In contrast, the Internet literary blogs are building communities of readers who demand, and contribute to, significant discussions about books. And these web enthusiasts have an easy way to spread the word to others.

Weeks pays homage to the greatest American book reviewer of the 19th century, Edgar Allan Poe, the sainted “tomahawk critic.” Near the end of his life, Poe attempted, but failed, to fund his fantasy literary magazine – The Stylus – which was to be dedicated to standards that remain inspirational: “an absolutely independent criticism;– a criticism self-sustained; guiding itself only by the purest rules of Art; analyzing and urging these rules as it applies them; holding itself aloof from all personal bias; and acknowledging no fear save of outraging the Right.” If Poe were alive today he would no doubt furiously castigate the vapid BCD book reviews and jump at the opportunity to blog on books with vim, vigor, and provocation. (He would also be trying to figure out a way to be paid for his efforts.)

Weeks and others think it is worth arguing with the powers at the BCD and maintain the current state of reviewing mediocrity. For me, the time for pleading with — or bashing — the mainstream media about book reviews has passed. For better or worse, the future of book reviewing is going to be online. Those with passion, vision, and imagination will be better off helping to shape Poe’s dream on the Internet.