You are here: Home / Film / Movie Review: Bobby Fischer Against the World

The Bobby Fischer that the documentary portrays is both a creature of the Cold War era, shouldering that burden, and a peculiarly American hero. It airs this Monday, June 6, on HBO

Bobby Fischer Against the World. Directed by Liz Garbus. 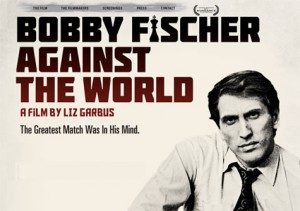 This, simply, is a very good movie, the best yet about the life and times of Robert James Fischer. It’s not easy to convey the intensity of chess, even to the non-player, as this film does, while telling the human tale of the tragic hero that was Bobby Fischer.

Why hero? Because this self-made boychik from poverty line, roach-ridden Flatbush took on and demolished the Soviet chess oligarchy on his own.

Why tragic? Because he, in turn, was demolished—rendered sadly discordant, ugly, and strange—by his own fears, misconceptions, and compulsions.

The movie has precious footage: Bobby happily working out—playing ping-pong, swimming, doing pull-ups, stretches (along with Jack Lalanne on television)— in preparation for his 1972 bout with Spassky.

Director Liz Garbus, an accomplished documentarian, with the Emmy winning Ghosts of Abu Ghraib among her credits, puts the right talking heads on camera—chess champ Judith Polger, Garry Kasparov, Malcolm Gladwell, a variety of erstwhile Fischer chess chums and teachers—and gets the right kind of talk out of them. The octogenarian Kissinger, for example, recalls exactly what he said when the Prime Minister of Iceland asked him to urge the wavering Fischer on to his appointment in Reykjavik. Kissinger called and droned: “Go.” Fischer did, one of the few if not the only time he accepted direction.

The Fischer that Garbus portrays is both a creature of the Cold War era, shouldering that burden, and a peculiarly American hero—wounded, lonely, riding back out to the cutthroat wild west of his imagination. Garbus also manages to establish that Fischer was a particularly American kind of chess hero—a descendant of Paul Morphy, the nineteenth-century New Orleans prodigy who, after a tour in which he effortlessly defeated the best that Europe had to offer, establishing a new standard for chess as he did so, returned home to terminal muttering and madness. Muttering madness aside, Fischer claimed Morphy as the most innately talented of his predecessors.

Again, the footage: We know Fischer set off a chess craze in the United States. But it’s nice to see shots of the game proliferating among young and old on seemingly every sidewalk, in every park circa Fischer/Spassky.

This is not the definitive Fischer movie. There can be no such thing. Fischer is the kind of figure who always allows for more; there will never be nothing left to say about him. But it is an excellent film. I saw it in its single showing as part of Boston’s Independent Film Festival. It deserves and I hope will receive wider distribution.