When There Are No Words… presents six pieces written between 1936 and 1980 by composers responding (at least seemingly) to contemporaneous political events and situations. 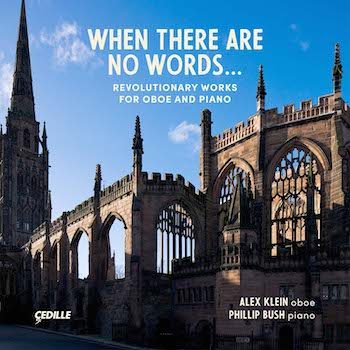 The relationship between music – especially abstract instrumental music – and politics is a challenging one to quantify, try though many might. Oboist Alex Klein and pianist Phillip Bush are but the latest to take up the cause. Their new album, When There Are No Words…, presents six pieces written between 1936 and 1980 by composers responding (at least seemingly) to contemporaneous political events and situations.

Paul Hindemith’s Oboe Sonata dates from 1938, just after the composer and his wife fled Nazi Germany for Switzerland (and, later, the United States). Its two movements are mirror opposites of one another: the first, a dry, off-kilter march; the second, an orderly, noble, lyrical fugue (essentially). Is this music of resistance or extra-musical commentary? Or is it just a bunch of isolated notes?

Perhaps the answer lies somewhere in the middle. Still, Klein and Bush make a compelling case for the former. In their performance, the opening movement’s icy clarity suggests a caricature of authoritarianism in action: inflexible motivic ideas, stern melodic lines, and rigid ceremonial gestures parading thoughtlessly hand-in-hand. The second movement, on the other hand, with its serene phrasings, amiable dancing episodes, and rich shadings of color presents a compelling alternative.

Such questions of purpose are somewhat less necessary for Pavel Haas’s 1939 Suite for Oboe and Piano, which evidently drew on a pro-Czech, anti-Nazi text: the composer recast a set of three songs (the lyrics have since been lost) as a sort of coded form of protest music. Here, Klein and Bush capture the Suite’s fervency with fire: the first movement’s wind-down is mightily dramatic, while the second’s sober, introspective moments glow and the finale functions as an expressive culmination of all that’s come before.

Likewise, Benjamin Britten’s Temporal Variations. This 1936 effort suggests a mad dash into war: a lyrical theme is caught up in the heat of the moment and, as the battles rage, is progressively shredded. Klein and Bush capture the music’s stern aspects well – particularly in the “Commination” and “Resolution” – but also the bittersweet turns of the “Waltz” and “Polka.”

In the former, the duo subtly highlights the Etudes’ beguiling allusions to Brazilian musical forms, especially the Calmo’s carefree coda and the folk song-like fluidity of the concluding Allegro. The Slavický, with its bold alternations of bleak, mournful figures and frolicsome dialogues between the two instruments inhabits a correspondingly invigorating sound world; the Klein-Bush duo’s shapely account of its third movement, “Triste,” is the album’s highlight.

Filling out the recording is William Bolcom’s reflective Aubade – for the Continuation of Life. A 1980 meditation on the threat of nuclear annihilation, it’s perhaps a bit too concise for its own good – though the culminating melody (think bittersweet Copland) is affecting.

As usual, Cedille’s recorded sound is excellent. The booklet includes deeply informative historical notes by Leon Shernoff as well as interpretive commentary from Klein, who’s clearly thought long and hard about this program and this music.