You are here: Home / Books / Book Review: The Climate Crisis and the “Race for Tomorrow”

If there is one book to pick up that will get you interested in what is happening to our climate, Race for Tomorrow is it. 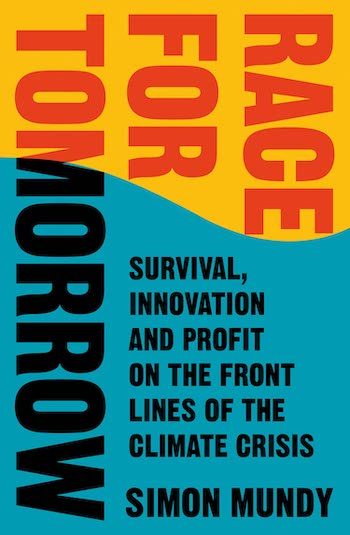 Whatever your opinions on climate change, it can seem like a daunting subject. What if there were someone, a well-established financial reporter who traveled all over the world, from Greenland to South America to Siberia to Bangladesh to Africa to Iceland. From Israel to California. And what if, instead of just cataloging facts about climate, he was to talk to local people who are dealing with the effects of climate change as well as experts who are trying to develop methods and technology to get out in front of the problem?

This is exactly what Simon Mundy, the Moral Money Editor of the Financial Times, did over a period of two years. The results are fascinating. If there is one book to pick up that will get you interested in what is happening to our climate, this is it. The title refers to what Mundy sees is happening wherever he goes: people are grappling with recent changes in weather patterns while businesses and scientists are madly pursuing strategies to cope with and combat the catastrophes occurring with increasing frequency where they live. Despite what Americans might hear from right wing politicians, talk show radio and Fox news, the argument is over.

Just ask the Department of Defense, which is now preparing for climate refugees as well as planning where to move our military bases in the South Pacific. Or follow how insurance companies are beginning to calculate the costs of insuring coastal homes. Not to mention insurance companies who are taking out reinsurance to protect their bottom line against the disasters to come. Meanwhile, you might want to invest in catastrophe bonds as a hedge against hurricanes. Mundy finds that even the coal mining and big oil companies admit reality: they figure that they had better mine and drill while they can before the transition to green energy puts them out of business.

Mundy travels to Mongolia and stays in a circular wooden structure called a ger. His host, Tuctvengel, raises sheep and goats, but increasingly harsh winters have decimated his herds and those of his fellow countrymen. In a parallel with many other industries in the world (fishing and farming in the US for example), the Mongolians have developed their herds — raising their standard of living by exporting meat to profit by a growing world wide demand — to the point that they can no longer sustain themselves. At this point, climate change is causing droughts and extreme weather that threatens their livelihood. In a preview of the future, Mongolians have begun to work together in co-ops to survive.

To create lithium batteries manufacturers in the US and China need cobalt. So, Mundy travels to the Congo and introduces us to Monique Swila, “one of many small entrepreneurs in the Congolese mining sector, at her cobalt mine in Kasulo.” Her “mine” is a hole in the ground that workers she hires climb down into while their mates suspend them with ropes. They hack out chunks of cobalt to gather in bags and take to a market to sell. This is cobalt that will end up powering Teslas and other EVs in Europe and China and the US. Monique splits the proceeds with her workers. But this is dirty and dangerous work.

When Mundy travels to California, he talks to Tim Holmes of QuantumScape. Holmes is working on a next generation solid-state battery that won’t need cobalt. That’s fortunate because there is a limited supply and China owns most of the cobalt mining ‘companies’ in the Congo.

Mundy journeys to Brazil’s rainforest and meets Awapy of the Uru Eu Wau Wau tribe. He is trying to protect the Amazon from clear-cutting by cattle ranchers who are burning down forest land illegally. They get away with it because the Bolsonaro government allows them to. The tragic loss of the rainforest — referred to as the “lungs of the earth” because it absorbs carbon — parallels the melting of ice in Greenland and Siberia. These losses create an increasingly powerful feedback loop that helps explain why the weather is changing so fast.

This is the illuminating reportorial pattern in Race for Tomorrow. (One that our head-in-the-sand mainstream media would be wise to duplicate.) Mundy witnesses the devastation that climate change is already causing around the world, but then he looks into what people are doing about it, examining what methods and technologies are being developed to assist survival. One of the surprising aspects of the book is that outside of Brazil, Australia, and the US, few in the world deny what they can see happening around them. It really makes you wonder at what looks to be the utter absurdity, even madness, of the minds of all those in denial in our country.

I’ve been reading and writing about climate change for the last ten years. I have to admit that it is difficult to accept the idea that humans have altered the weather patterns of the entire planet. But over that last decade I’ve visited Alaska and seen how much the glaciers have retreated. I’ve been to Cape Town in South Africa where a five-year drought just ended. I’ve been to Mexico and seen the roads clogged with cars and buses spewing black smoke. I’ve been to Napa where they’ve changed the way they irrigate due to the permanent shortage of water. And I’ve been to Jungfrau in Switzerland and seen the ice disappearing from the Alps.

A number of recent books including Michael Mann’s The New Climate War and Saul Griffith’s Electrify, provide strategies for mitigating the effects of climate change. Race for Tomorrow grounds the complex demands posed by the climate crisis in the lives and livelihoods of people all over the world. And these efforts offer invaluable hope for the future. It also posits the need for concerted activism, political as well as economic. To be successful in confronting this daunting and multi-faceted challenge everyone must be brought on board. And that will mean dragging well-heeled politicians and CEOs, mega bankers and fossil fuel presidents off their yachts and out of their Maseratis. It is way past time all of us raced in the same direction — toward the preservation of nature and ourselves.

Editor’s Note: Link to a Short Fuse podcast that features Simon Mundy talking about his book Race for Tomorrow