You are here: Home / Books / Short Fuse Podcast #49: “Race for Tomorrow” — On the Front Lines of the Climate Crisis 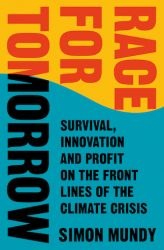 Simon Mundy, a journalist for the Financial Times, spent two years traveling to 26 countries on six continents to meet with people who have been affected by extreme shifts in climate, talking with locals on the ground and business leaders who are grappling with the implications of global warming for the world economy. As climate change transforms the planet, he wanted to help himself and others understand “the biggest and most important story that I, or any journalist of my generation, will have an opportunity to cover. It’s just the beginning.” Underlying this conversation is a warning: we ignore climate change at our peril. Every one of us.

Mundy is currently the Editor of the Financial Times‘s award-winning Moral Money platform, which covers the push for a cleaner and more sustainable world economy. His career began in Johannesburg, covering Southern Africa for the FT. After a stint as a corporate reporter in London he spent seven years in Asia, heading the FT bureau in Seoul and Mumbai.

The journalist spent nearly two years traveling through six continents and visiting 26 countries to write Race for Tomorrow, which draws on the stories of a diverse cast of characters who are locked in a historic struggle to deal with the climate crisis. He talked to people in communities hit by the degradation of nature as well as leaders charged with finding solutions. Race for Tomorrow is now on sale in 40 countries.

Books mentioned in this episode:

A Sand County Almanac by Aldo Leopold
Silent Spring by Rachel Carson
The Lost Gospel of the Earth by Tom Hayden
The End of Nature by Bill McKibben
A Life on Our Planet, My Witness Statement and A Vision for the Future by David Attenborough

Music for the Short Fuse Podcast

Jeannine Otis recorded the music for this episode of the Short Fuse Podcast. Music has always been a part of Jeannine’s life. Her mother was a musical director and her family includes the Jones Brothers, Hank, Thad, and Elvin who formed the basis of exposure to music that began a career that started with Jeannine’s debut as a vocalist with the Detroit Symphony with American Youth Performs at age 12.