You are here: Home / Books / Book Review: “From a Distant Relation” — Drowning in Yiddish

What is evident throughout these superb tales of turn-of-the-century shtetl life is their authenticity.

From a Distant Relation by Mikhah Yosef Berdichevsky. Edited and translated from the Yiddish by James Adam Redfield. Syracuse University Press, 448 pages, $34 (paperback). 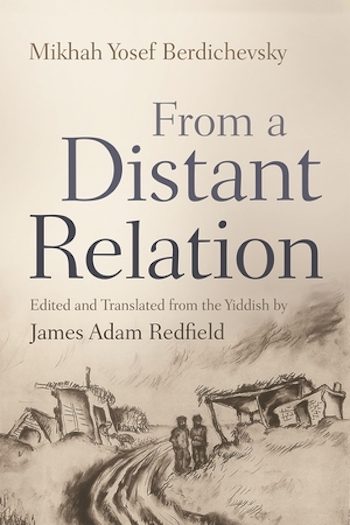 Mikhah Yosef Berdichevsky (1865-1921) earned praise for his literary talents, primarily as a scholar of ancient Jewish and Christian history as well as a commentator on contemporary political thought. He was also a fluent stylist in Russian, German, and Yiddish, a valued colleague of both Nietzsche and the Brothers Grimm. Regrettably, his portraits of the shtetl of the southern Russian Empire have been dismissed by critics — when they were not disparaged. Translator/editor James Adam Redfield does a formidable job of honoring those moving tales. His versions have the feel of lost times without serving up the blurred nostalgia of untroubled — if not magically soothed — trials and tribulations. I take particular pleasure in his choice of not translating when the original Hebrew has significant Biblical or other religious sources, when the Yiddish cultural allusion would not be obvious, or where there is no idiom sufficient that captures in English the original’s painfully humorous tone. Fear not: Redfield’s ample notes and glossary provide what is necessary — the literal translation, implication, and source. Included also is a clear map of the places mentioned in the tales, in Russia, Ukraine, and Austria/Hungary.

MYB’s 1902 marriage to his third wife brought him back to visit his Ukrainian home town, Dubova, and his native language, Yiddish. For a brief four years he was inspired by both. He wrote journalism and tales in both Hebrew and Yiddish until 1906, when “Yiddish became unbearable” to him. For whatever reason (fatigue after 176 stories, monologues, and sketches?), from then on MYB wrote his political journalism and philosophical treatises almost exclusively in Hebrew. He even adopted a Hebrew name: Bin-Gorion.

From a Distant Relation is a cunning selection of MYB’s Yiddish pieces, which, save for “Hasidic Tales,” Redfield idiosyncratically catalogues in chapter topics of his own discretion: e.g. “From the Heart,” “Conversations,” “Right at Home,” “Fathers and Sons,” “Mothers and Sons,” etc. One may argue about his decision to categorize, but the groupings need not affect appreciation of the writings themselves. What is evident throughout MYB’s tales is their authenticity. There is no attempt to gloss the vernacular dialogue with grammatical niceties or adjectival décor or even inadequate translation. Often an outside bemused narrator sets up a person or a scene, as if chatting to us, or a fictional companion, with expansive neighborly intimacy. At other times, we hear the story in the voice of the character and see the world through his or her perspective. Sometimes both narrator and character mirror or contrast each other in the same tale. Taken as a whole, these narratives are vivid and layered, interspersed with Yiddish maledictions and Hebrew blessings.

I am particularly moved (perhaps because of my theater background) by the collection’s monologues. Although misogyny prevails — “If I had my own home, I might be a bit better off; instead, I’m stuck here with my wife’s family, two witches under the same roof (her and her mother both!)” — there are times we hear a woman’s point of view conveyed through a credible female voice: poignant, angry, petulant, perplexed, proud, and persistent. A restless woman wanderer asks her deceased husband, “What were you trying to tell me? You took my life, and shattered it into a million pieces.” In another monologue, Sarah speaks: “Hard times aren’t so hard when you have money. But let’s say you don’t.… my husband despised me, and let’s say I have strong feelings for him too…. There’s only one thing I can’t stand about the thought of dying: being stuck with my husband again.… I never went to school a day in my life, but I know the world and I have eyes and ears.”

Redfield opens this volume with a lengthy and superb academic introduction to this selection. It is a blend of fact and critique, penned with admiration and insight. It may also be a bit daunting to those not acquainted with the range and variety of Yiddish and Jewish literature and literary masters. For the daunted, I say go directly into the stories. Succumb to the moods and the mastery of the tales. They stand firm without the context. It is easy enough, and extremely enlightening, to become aware of references after reading the tales. There are cogent footnotes at the close of most of the stories and a thorough glossary of Yiddish and Hebrew terms and phrases at the end of the book.

I highly recommend reading the notes. They place Berdichevsky’s shtetl figures in a Yiddish stream of generations of study and suffering, of family and famine, of myth and the minutiae of the quotidian. They give substance to what might seem mere metaphor. Amos Oz, whom Redfield quotes in the introduction, offers a terse summation of MYB’s “definition of humanity,” at least for those four years when he was immersed — well, drowning — in Yiddish: “the sum of our sins and the fire pent up in our bones.” As the volume closes, Redfield brings us tales of the end of the world of the shtetl, its inhabitants slipping away to the “goldene medina” (America). I imagine that, for those emigrés, memories of the shtetl took on the emotional resonance that the heartbroken narrator of Berdichevsky’s “A World within a World” expresses for this long lost love: “(She) will always be inside you, even if you run to the ends of the earth.”

Joann Green Breuer is an artistic associate of the Vineyard Playhouse.