Heard Again for the First Time: A Legacy of Music Lost, Forgotten, and of Our Time. Ravello RR8057 [61 minutes] 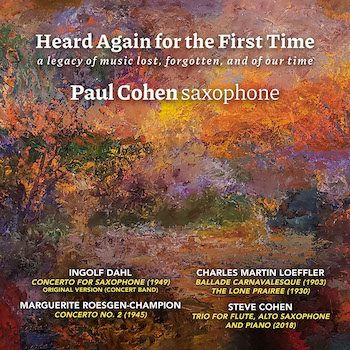 A CD of new and forgotten works for saxophone shines a welcome light on an important solo instrument and four fine composers, including a Paris-based woman composer who clearly deserves more attention than she has received. The organizer and main performer is Paul Cohen, one of America’s great classical saxophonists. (He teaches at the Manhattan School of Music and at Rutgers.)

The saxophone is an extremely flexible instrument in the hands of a superb performer. Yet few concertgoers associate it with classical music, even though it was put to excellent use by such major composers as Bizet (in his incidental music to Alphonse Daudet’s play L’Arlésienne), Debussy (a rhapsody, with piano or orchestra), and Alexander Glazunov and Jacques Ibert (a concerto apiece).

Paul Cohen has here brought us the original, extended version (1949) of Ingolf Dahl’s rather Stravinskyan Concerto for Alto Saxophone and Concert Band; an attractive and quite tuneful, sometimes dance-y new Trio for Flute, Alto Saxophone and Piano (2019) by Steve Cohen (no relation to Paul); and three pieces with a strong French pedigree. One of these is Concerto No. 2 (1945) by Marguerite Roesgen-Champion (1894-1976), a composer better known to music-lovers for her monophonic-era recordings as harpsichordist.

Swiss-born Roesgen-Champion lived most of her life in Paris, and her concerto reflects this, sounding like a very effective version of what Ravel might have written had he lived a bit longer, or one of Les Six on a day when he or she was feeling un-ironic. The work, though called a concerto, has an accompaniment consisting solely of the intriguing combination of bassoon and harpsichord. The bassoon, not surprisingly, gets some melodic lines as lovely as those for the saxophone, though never quite so much as to make the work feel like a double-concerto. (This work can be heard for free on YouTube; the entire CD is available on Spotify and other streaming services. A portion of each track on the CD can be heard here.)

I was most intrigued to hear recordings of two pieces by Charles Martin Loeffler (1861-1935), a Berlin-born violinist-composer who studied violin in Paris and then moved to America, where he played in the Boston Symphony Orchestra for two decades, eventually as assistant concertmaster.

Loeffler was a devoted advocate in the Boston area and in the English-speaking world generally of the current French masters, such as Gabriel Fauré and Vincent d’Indy. He published an edition of Fauré’s First Violin Sonata with the eminent firm of G. Schirmer. Loeffler was a much-prized performer at intimate concerts in the homes of wealthy Bostonians such as Isabella Stewart Gardner. He and Mrs. Gardner remained trusted friends, as their surviving letters attest. (See my article, now online, in the Gardner Museum’s journal Fenway Court, 1974.)

Ballade carnavalesque (1903) has a complex back-history, well explained in notes by Bruce Gbur. (More details can be found in Ellen Knight’s superb biography of Loeffler, published by University of Illinois Press. The work was recorded once before, in 2002.) In one continuous 14-minute movement, the piece traverses many moods, made possible in part by the colorfully varied instrumentation: flute, oboe, alto saxophone, bassoon, and piano.

Loeffler was never completely satisfied with the Ballade and left it unpublished, perhaps in part because he had plucked one particularly beautiful theme from it to insert in his A Pagan Poem for orchestra and piano obbligato. Cohen located two manuscript scores of the Ballade (Library of Congress and New England Conservatory) and published his edition some years ago. The long-awaited recording allows us to wallow and be startled, by turns, at yet another work by a composer who lived his whole adult life in America yet gets consistently neglected by people organizing concerts and recordings devoted to “American music.” (A few of Loeffler’s pieces are at least well known from recordings. The aforementioned A Pagan Poem can be heard conducted by Howard Hanson, Manuel Rosenthal, and — in glorious stereo — Leopold Stokowski.)

Heard Again for the First Time: A Legacy of Music Lost, Forgotten, and of Our Time also includes another Loeffler premiere: The Lone Prairee, for tenor saxophone, viola d’amore, and piano (ca. 1930). The piece uses not the just the cowboy song named in the title but also the African-American spiritual “Sometimes I Feel Like a Moanin’ Dove.” Is that American enough for you?

All in all, a fascinating compilation of pieces, and Paul Cohen and his colleagues (including harpsichordist Rebecca Cypess, who is also a prominent musicologist — though not on this occasion) play with exquisite control and near-infinite gradations of character. A treasure trove!

Paul Cohen’s first compilation CD, American Landscapes: Three Centuries of American Music for Saxophone, is still available and no less fascinating, with superb performances of little-known works by seven composers, including Alec Wilder, Elie Siegmeister, Caryl Florio (the first concerto ever written for saxophone and orchestra, 1879; Florio was the penname of William James Robjohn), and a little-known arrangement by Percy Grainger of his endearing Molly on the Shore. The beginning of each track can be heard here.