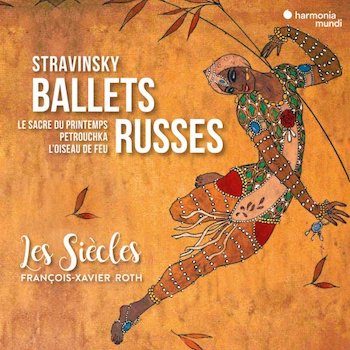 What benefits can a period ensemble possibly bring to the music of Igor Stravinsky, particularly some of his most groundbreaking fare? That’s the question at the heart of this newest release from François-Xavier Roth and Les Siècles, which features the 20th-century titan’s three ballets for Serge Diaghilev’s Ballets Russe alongside the hodgepodge divertissement Les Orientales.

The answer is, perhaps surprisingly, quite a few good things.

Texturally, Les Siècles performances are diaphanous. Their Firebird, for instance, is stunningly clear: little details of rhythm, texture, color, and melody jump out. The string glissandi at the end of the “Introduction” speak eerily. Dovetailing between woodwind solos in “The Firebird’s Supplications” is seamless. Throughout, the score’s sul ponticello and col legno indications shimmer. The end result is a reading that’s fresh, limber, and profoundly balletic.

At the same time, it’s not wanting for weight or strength, as the thrilling sequence of transitions into the tight, driving “Infernal Dance” — and the burnished account of the coda — attests.

Pétrouchka is likewise clear and fresh. There are further exquisite handoffs between instrumental families in the opening of the Second Tableaux. Both themes in the Ballerina’s waltz with the Moor (in the Third Tableaux) are pristinely balanced. The Fourth Tableau’s opening is thrilling: weightless and flying.

Roth’s interpretation also draws out much of the music’s latent lyricism. The various iterations of the First Tableau’s opening theme consistently sing. So do the score’s numerous solos (especially those for piano, violin, and flute).

Ultimately, this is a purposeful, personable Pétrouchka. There’s a real sense here of what makes this music so bracing: its instrumental daring, rhythmic complexities, harmonic and textural farsightedness. Yet the performance never loses sight of the music’s roots in Russian folklore, -song, and -dance. Yes, in some big moments, instrumental lines that might better speak on modern instruments are swallowed in the din. But the raw energy of Roth’s conducting and Les Siècles’ playing carries the day.

Many of the same qualities appear, too, in The Rite of Spring. The woodwind lines (especially in the famous “Introduction”) are clean and sinuous. “Spring Rounds” floats rather than lumbers. The low-string harmonics at the start of the “Mystic Circle of Young Girls” are miraculously resonant and the concluding “Sacrificial Dance” is wild.

What’s lacking, periodically, is some rhythmic and/or dynamic edge to the proceedings. In the “Sacrificial Dance,” for instance, the timpani’s projections are a shade muffled. So, too, the wailing horns in the “Ritual of Abduction”: they sound rather anemic.

The payoff, though, is a lucid, dancing performance that brilliantly illuminates Stravinsky’s contrapuntal writing in Rite as well as his keen ear for instrumentation. Too often, The Rite of Spring comes off as little more than an orchestral showpiece; in Roth’s hands, it’s that — but it also sounds, fundamentally, like a ballet. That’s a welcome change of pace, even if you’re not about to swap out your Monteux-, Bernstein-, Stravinsky-, Boulez-, or Tilson Thomas-led recordings of the piece for this one.

Rounding things out is a lithe, energetic account of Les Orientales. A potpourri of turn-of-the-century music that broadly evokes the Orient by Alexander Glazunov, Anton Arensky, Christian Sinding, and Edvard Grieg, it’s no masterpiece (certainly not compared with Stravinsky’s contemporaneous ballets). But, for a sense of what else Diaghilev’s company was doing at the time it makes for a welcome listen.

Among other things, there’s a snappy “Entrée des Sarrazins” (from Glazunov’s Raymonda), beguiling “Danse orientale” (by Sinding), swooning “La charmeuse de serpent” (by Arensky), and spry “Småtroll” (by Grieg). Roth and his band play the whole thing with panache. You probably won’t want to invest in this album just for Les Orientales, but, as filler, it’s anything but disappointing.