You are here: Home / Books / Book Review: “To Walk Alone in the Crowd” — Masterpiece or Mess?

Like Blinky in Pac-Man, the narrator of this provocative but often frustrating and diffuse book gobbles up everything.

To Walk Alone in the Crowd by Antonio Muñoz Molina. Translated from the Spanish by Guillermo Bleichmar. Farrar Straus & Giroux. 419 pp. $30.

A book should not be planned out beforehand, but as one writes it will form itself, subject to the constant emotional promptings of one’s personality.  — James Joyce 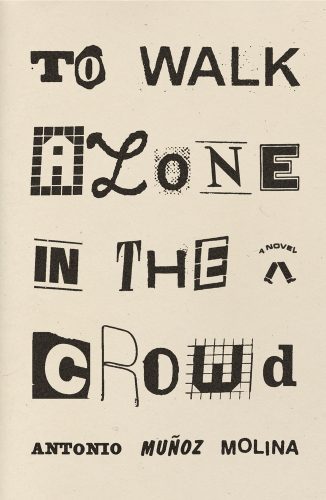 My spirits slumped a little when I saw this remark by Joyce as the epigraph of Muñoz Molina’s new novel, if that is what it is. It was aptly chosen. Joyce’s later works are admired and honored for their daring and innovation, but not often imitated by writers who hope to make a living. Like those books, Molina’s is full of dazzling passages and visions that might well sustain many readers’ engagement. Like the action in Ulysses, Part II, “Mr. Nobody,” takes place on one day in one city. But as someone once wrote (I would give attribution if I could remember his or her name), “Writing is not a trade in which one ordinarily can succeed by the production of interesting ruins.”

Muñoz Molina, luckily, has already succeeded. At age 65, he is the author of eight books, winner of many prizes, member of the Royal Spanish Academy, former director of the Cervantes Institute in New York, where he lives part of the year. If this had been his first book, however, I surmise that his second might have been a tough sale.

It is amusing to see a publicity department try to promote a foreign book that it cannot figure out in a way that will appeal to American readers. On the uncorrected proof, FSG calls To Walk Alone in the Crowd “a novel tracing the path of a nameless wanderer as he walks the length of Manhattan and beyond — from South Ferry to the Grand Concourse in the Bronx — taking note of all the literary and historical ghosts haunting him, and the city, along the way.” True enough, but misleading, since the New York walk composes roughly the last, to my mind the weakest, third of the book.

However, the author of jacket copy on the finished book decides that the narrator is not nameless, ignores the New York walk, and celebrates “a book that is part memoir, part novel, part chronicle of urban wandering,” adding that “Muñoz Molina here assembles overheard conversations, subway ads, commercials blazing away on public screens, snatches from books hurriedly packed into bags or shoved under one’s arm, mundane anxieties, and the occasional true flash of insight — struggling to announce itself amid this barrage of data — into a poem of contemporary life: an invitation to let oneself be carried along by the sheer energy of the digital metropolis. ”

In other words, the book is saluted as a brilliant mess: a raw and inchoate Mulligan stew, “a barrage of data,” something like James Agee’s Let Us Now Praise Famous Men, which might be fact or fiction, a literary grandmother’s attic with “an occasional true flash of insight.” But whatever that freewheeling description might mean, it still misses what this provocative but often frustrating and diffuse book is about.

To Walk Alone in the Crowd is an attempt partly to conjure, and to identify with, several brilliant, impoverished, debt-ridden, self-destructive, emotionally troubled belles lettrists who haunted the hearts of teeming cities (and this book) and ended up dead before their times: Thomas De Quincey, Edgar Allan Poe, Walter Benjamin, Oscar Wilde, Charles Baudelaire, Fernando Pessoa. Other urban literary habitués are mentioned, including Melville, Whitman, Joyce, and Federico Garcia Lorca, but they lack the nearly suicidal recklessness of the others. Their decay and downfall, especially that of Poe, is charted in detail. The book wanders erratically, perhaps intentionally, as they sometimes did.

To Walk Alone in the Crowd consists of hundreds of paragraphs, most of them a half- or full-page in length, each one headed with a phrase or sentence in bold-face capitals, such as YOU MAY NOT SEE US, BUT WE’RE HERE, or MULTIPLY YOUR HAPPINESS, or WHEREVER AND WHATEVER I WANT. As best I can tell, these rubrics (that’s the closet appellation I can think of) in most cases have nothing to do with what follows, but they all share the same alluring assurance. They seem to be slogans or promotional lines or phrases ripped from magazines or seen on TV or video, or billboards, stuck at random atop each paragraph. The narrator tells us repeatedly that he gathers these phrases everywhere and pastes them in scrapbooks carried in a satchel. He is all ears and eyes, listening and watching everywhere he goes, recording sounds or writing down every detail that catches his attention.

The book resembles W.G. Sebald’s novels in its digressiveness and accretion, but it is less focused and clear-headed. Like Blinky in Pac-Man, the narrator gobbles up everything. A haystack is built up and the reader’s task is, before searching, to decide if there is likely to be a needle inside and, if so, whether finding it would be worth the search.

Part I, “Office of Lost Moments” constitutes the first two-thirds of the book in number of pages. In it the narrator introduces his doomed heroes and describes their careers, mainly on their fatal downslide. They are often in debt, continually changing their addresses, beset by drugs or alcohol, teetering on the edge of existence, virtually always in cities. About their actual writings he says almost nothing. It’s about De Quincey as a human wreck, not about Confessions of an Opium Eater.

The writer mentioned most often is the Jewish German critic and philosopher Walter Benjamin, who fled Berlin for Paris in 1933, then made for the Pyrenees when the Germans invaded France in 1940, hoping to get to Spain and thence to the United States. Blocked by Spanish customs officials and deeply depressed, he committed suicide in a hotel in a Spanish village in December. Molina more than once describes the few personal effects found after Benjamin’s death. One in particular is missing and never found: a heavily stuffed satchel, though no one knows what was in it.

This satchel is a sort of blinking signal that shows up again and again throughout the book. The narrator meets a stranger at the Café Comercial in Madrid, his home city, of uncertain age and description, an intellectual who always carries a stuffed satchel and declaims literary values. “The great poem of our century,” he intones, “can only be written with rubble and debris…. People throughout history have done what needs to be done with the materials they have at hand, and what is presently most at hand is garbage, junk, detritus. So that is what will have to be used for the poem.”

The pair meet repeatedly at the Comercial, although, weirdly, the narrator never learns the other’s identity. One day, the café is closed, locked, and the narrator is unable to locate the man again. Strangely, when he tries to identify him by asking around the neighborhood, he finds that he cannot describe him in detail. And yet the figure makes fleeting appearances (or seems to, but the narrator is never quite sure it’s him) throughout the book, including at least once in New York. Is he a figment of his imagination? the ghost of Walter Benjamin? a projection of his own self? After all, the narrator also carries a heavy stuffed satchel throughout his “researches.” We never find out.

Part II, “Mr. Nobody,” the all-day walk from South Ferry to the Bronx (ending at Poe’s cottage), seems to in some sense reprise the urban wanderings of the narrator’s restless tormented heroes. The meaning of the title is not clear, but it might be that he wishes to be something like Emerson’s glass eyeball: an invisible seer. “I am all ears,” he writes early on, “I listen with my ears and with my eyes.” The title is taken from Emily Dickinson’s poem, “I’m Nobody! Who are you?” Though it’s clear that the narrator is Molina, he never identifies himself per se, and habitually switches back and forth between the first and third person — a fission which allows the self to report the thoughts and acts of itself as if objectively.

The walker tries to describe virtually every sight and sound and person he sees along the way, but limited to those senses (there are but few smells or touches), he discloses almost nothing essential or original about New York City. (We do learn that he disdains Starbucks and Duane Reade.) His point is elusive. He writes down everything, careful to fill every inch of every notebook page, and never discards a pencil until it is too short to hold. He is especially fascinated by the mentally ill poor and street people he sees all along the way, describing them almost as grotesqueries: their obese bodies, bizarre clothes, missing teeth, and outlandish behavior. He looks at and gathers in their images, like the magazine clippings that fill his notebooks, but never speaks to them or knows anything about them, and shows no hint of compassion. He is Mr. Nobody among the nobodies.

The purpose of this perambulation is obscure. Any reasonably imaginative person with a good pair of shoes could walk across New York, like Jonah across Nineveh, write down everything she sees and hears, and disgorge it all into a book. But why?

All that I have written here only begins to describe the multitudinous byways of this book, omitting, for example, its account of the murder of a Nicaraguan peasant woman accused of demonic possession; extensive descriptions of the narrator’s history with and loving feelings for his wife; a report on the radioactive wild boars of Fukushima, which reproduce profusely despite efforts to exterminate them; sour memories of psychotherapy and indirect references to depression; the tale (in poetic italic lines) of a vigilante on a rural Mexican bus who shoots and kills two robbers who prey on the passengers; a series of short disconnected conversations between people, seemingly overheard, on the street. Etc., etc., etc….

Oh, and there are the many repetitions. Molina tells us twice that Poe wrote a successful journalistic account of a balloon trip across the Atlantic that was completely invented. We read twice about Benjamin’s mysteriously missing satchel. During the walk across New York, Molina describes a demented Black man screaming at mannequins in a store window and attacking a wall, as if he had not already described the same man five pages earlier. A young writer’s editor would point out, “Er, Antonio, you wrote this earlier.” But a great writer has his privileges.

Is To Walk Alone in the Crowd a towering work of imaginative genius, or is it a diffuse, self-indulgent, corpulent pile of logorrhea that adds up to very little, by one who is looking for the needle in his own haystack? Readers will differ. To be sure, the book is full of memorable vignettes and pictures, which might satisfy many.

The dust jacket quotes Michael Hofmann in the London Review of Books: Molina “has gained for himself,” Hofmann wrote of an earlier book, “perhaps the greatest objective of the modern novelist: the freedom, in his next sentence, to say anything at all.”

To say anything? The greatest objective of the novelist? Allowing for the strong possibility that I am a hopeless philistine, I will say that to me this is a book that would have been far better had the author disciplined his “freedom … to say anything at all.”

David Mehegan is the former book editor and former publishing reporter of the Boston Globe. He can be reached at djmehegan@comcast. net.