You are here: Home / Books / Poetry Review: “Beowulf & Beyond” — A Rousing Night Out with Old English

Translator Dan Veach invites us to “pull up a bench in the mead hall, grab a brew, and enjoy a jazzy new performance.” 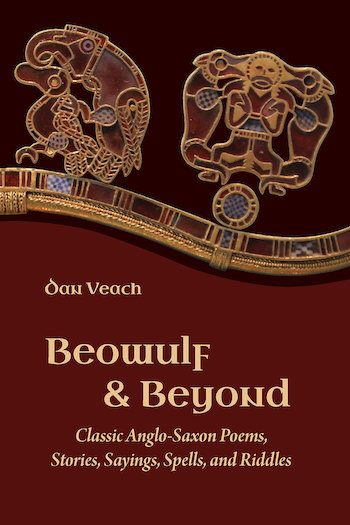 It used to be (and may still be) standard practice in graduate departments of English to require a course in Old English, otherwise known as Anglo-Saxon, our language as it was written before the Norman Invasion in 1066. For most Modern English-speaking readers, the knowledge of this rich linguistic and literary tradition has been conditioned by contemporary poets’ interest: Pound’s reworking of “The Seafarer,” Seamus Heaney’s Beowulf being the best known.

The textbook we learned from was Bright’s Anglo-Saxon Reader, revised by J. R. Hulbert with the aim (as expressed in its prefatory note, “of providing at least the essential parts of some of the most famous pieces . . . and of illustrating as wide a range of forms as possible.”

Dan Veach’s new Beowulf and Beyond covers a lot of the same territory, in modern English, that Bright and Hulbert covered, but in a decidedly more casual register. It is a refreshing introduction to the wider range of English writings from the seventh century through the eleventh, presented not for the student or the scholar, but for the general reader who wants to read poems (with a little prose interspersed) without notes, academic apparatus, or even much of a preface, just a “hello, come on in” from the editor-translator.

Readers will learn nothing here about the alliterative half-line that forms the scaffolding of Anglo-Saxon verse. They will learn as little as possible about the politics, the religion, and the warfare of the North Sea countries. In fact, Veach does not include one of the loveliest but most densely culturally allusive of Anglo-Saxon poems, “Deor’s Lament,” with its haunting reassurance: “Þæs ofereode, þisses swa mæg:” That has passed, this will also.

Clearly, one of Veach’s criteria for translation and presentation is accessibility. What readers will revel in is a wide range of poetry divided into sections by themes like “Blood & Battle,” with the battles of Brunanburg and Maldon dear to devotees of Tolkien heroics; “Love & Loss,” with the fairly often anthologized “Seafarer,” ” Wife’s Lament” and “Husband’s Message;” “Bold Spirits,” with its less familiar rewriting of Scripture. There’s also “Magic & Mystery,” where we can find incantations useful even today “to heal your land if it will not grow well, or if evil has been done to it.” Here also a few excerpts from the Exeter Book of riddles:

of our glorious speech

and its firm foundation.

And yet, this larcenous little guest

was not one whit the wiser

for all of the words he devoured.

The riddles and battle-pieces are well known enough by those who have dipped into modern versions of Old English before. What may be fresher are the selections from the Christian poetry retellings of parts of Genesis, Judith, and The Dream of the Rood — that “most marvelous tree, / the brightest of beams, / rising into the sky all wreathed in light,” Christ’s cross. The Anglo-Saxon Satan can be read as precursor of Milton’s. The Anglo-Saxon Eve

never suspecting that so many evils,

when she took that hateful messenger’s advice

to heart. She only hoped to win

God’s favor with her words.

Finally, as the irresistible pièce de résistance, the epic text of Beowulf. Here Veach does provide an overview of the poem itself and of his translating practice:

I have not tried to imitate its verse form — the reef on which so many have wrecked their ships. Instead, I have opted for a flexible line that retains the flavor and, hopefully, the power of alliterative verse.

I am tempted here to go into a professional riff comparing translations of the opening of Beowulf — there are so many to choose from, and I collect these for workshop study — but that, I think, would do esoteric violence to Veach’s inclusive spirit here. It’s exactly the kind of reading he does not want to encourage. Instead, simply plunge in:

have heard the bygone glory

of our people’s kings, how those princes

Thanks not a little to Veach, we, too, can hear all this bygone glory of princes, priests, and others. He calls on us to “pull up a bench in the mead hall, grab a brew, and enjoy a jazzy new performance.” It is an invitation well worth accepting.