Cellist Alessio Pianelli’s playing is songful and lovely. The Avos Chamber Orchestra — essentially a student orchestra — imbues their performances with a confidence and surety that is inspiring. 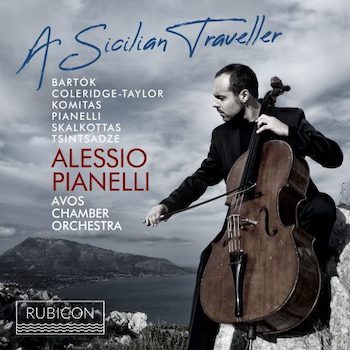 made with the Avos Chamber Orchestra (ACO), takes for its theme cultural and musical enrichment by way of exploring different corners of the globe. That’s an enticing concept in normal times. Coming a year into a global pandemic, as travel resumes and borders begin to reopen, Pianelli’s compendium seems particularly apt.

His repertoire (all of which he transcribed for cello and string orchestra) isn’t quite global, but it does span the Caucasus to the Atlantic, featuring music by Georgia’s Sulkhan Tsintsadze, Armenia’s Komitas, Greece’s Nikos Skalkottas, England’s Samuel Coleridge-Taylor, and Hungary’s Belá Bartók. Capping it all off is a set of variations written by Pianelli himself.

Either by accident or, perhaps, design, there’s an intriguing similarity of character and style across many of these pieces (all of which, save the Pianelli, were penned during the 20th century).

Similarly enticing are Komitas’s Armenian Folk Songs and Dances. The same sort of driving vigor that infuses the Tsintsadze is to be found in Komitas’s lively “Erangi” and robust “Habrban.” There’s no shortage of atmosphere, either, as the delicate opening to “Krunk” demonstrates.

Bartók’s Romanian Folk Dances constitute the disc’s best-known fare. There’s a bit more grit and invention in Bartók’s writing than either Tsintsadze’s or Komitas’s, and that provides a welcome stylistic contrast to the proceedings.

Also satisfying is the inclusion of three movements from Skalkottas’s 36 Greek Dances. As in the Bartók, Skalkottas’s pungent blending of folk and concert traditions shines in these excerpts, be that in the jaunty, delirious “Ipirotikos,” insouciant “Kritikos,” or spry “Kleftikas.”

Coleridge-Taylor is represented by a pair of transcriptions from his 24 Negro Melodies: the soaring “Pilgrim’s Song” and the great spiritual “Deep River.”

Pianelli’s Variations on a Sicilian Folk Song aims to meld elements of all the preceding works into a coherent statement. To these ears, it doesn’t fully succeed at that — though the piece’s strengths (stark juxtapositions of contrasts, inventive writing for strings, and some probing, pensive episodes) capably offset its cheeky, jovial spots.

In a sense, the same can be said for the larger album.

There are times one might like a stronger sense of shape or character. The Coleridge-Taylor movements, effectively the disc’s emotional anchor, want for some fervor; more soul would have carried the day. Likewise, there’s not much dust in this Bartók performance: everything’s neat and clean.

That said, the level of energy, shade of colors, and feel for balances Pianelli and the ACO bring out in the Bartók are excellent. The Coleridge-Taylor movements are sincerely played. The remainder of the album’s selections range from spirited (Tsintsadze and Komitas) to bracing (Skalkottas).

In all of them, Pianelli’s playing is songful and lovely. The ACO — essentially a student orchestra — imbues their performances with a confidence and surety that is inspiring. That the group brings such dynamism to music so far off the beaten path is similarly invigorating; let’s hope this disc begets a sequel.