You are here: Home / Featured / Theater Review: “Play On! Othello” — A Painful and Invigorating Update

You need to hear this play. Especially if you are white and already “know” Othello. Listen again (and again) and prepare to question old assumptions.

Shakespeare geeks are fond of informing others that audiences in Elizabethan England spoke of going to “hear a play” rather than “see a play.” Well that proves it, we proudly declare, the text is everything. But could it be that we need to expand what we mean by “hearing” a play? For the next two months, Actors’ Shakespeare Project is asking us to listen to Shakespeare plays anew — through a BIPOC lens.

First up is the opportunity to hear a new Othello, translated by Mfoniso Udofia. The updated script is a part of the Play On Shakespeare project. Several years ago, a longtime patron approached the artistic staff of the venerable Oregon Shakespeare Festival and asked if he could commission the translation of some of the Bard’s plays into contemporary modern English. The first play selected was Timon of Athens and the response was extremely positive. Thus the Play On Shakespeare project was born.

With the Actors’ Shakespeare Project’s rehearsed reading of Play On Shakespeare’s Othello, audiences are being given the opportunity to hear the script in an iconoclastic way, one that fully reveals its racist and misogynist roots, that makes us acutely aware of the world in which the play was first created and performed.

For many people, the idea of updating Shakespeare’s language into accessible modern lingo appalls. Doesn’t that destroy the poetry?  Of course, if you’ve taught the plays, as I have, you know today’s students constantly complain that their “language” is inaccessible. (A number of renowned Shakespeare directors have noted that modern audiences are having increasing difficulty with the verse.) Those of us who love the texts insist that their vocabulary isn’t the problem, but their challenging syntax, the snaky construction of the sentences. All the information you need is right there in the text — you just need to read slowly and thoughtfully.

Well, it turns out that the playwrights and dramaturgs in the Play On Shakespeare project have broken the code. They have found a way to both skillfully update the language and maintain the verse’s musical quality. Even better, they illuminate the meaning of the dialogue in a way that emotionally grounds it for today’s audiences. I haven’t read the script yet but, to my ear, Mfoniso Udofia’s Othello comes off as starkly ripped-from-the-headlines, to the point that is both painful and invigorating. Wow!

In this adaptation of Othello, “The Moor of Venice,” is no more. Udofia and her dramaturg partners Ayanna Thompson and Alex Barron have painstakingly replaced each reference to the word Moor with a word that better evokes the inflection and significance for contemporary audiences. In this translation, Othello (Joe Wilson, Jr.) is referred to variously as “monkey,” “black beast,” “baboon,” “wandering barbarian,” “animal,” “ape,” “smooth-talking low life,” and others. (Including “Other.”)

Take, for example, the change in Act II. Iago (Jesse Hinson) is spinning his racist deceit, insisting to Roderigo that he should doubt Desdemona’s (Katherine Schaber) pure heart: “If she had been blessed, she would never have loved the Moor.” In Udofia’s pinpoint translation, this is what he says to Roderigo: “If she was truly moral, she could have never loved the animal.” The sting of calling him an animal underlines the presence of a world of prejudice that the word “Moor” cannot.

Of course, some of the adjustments are more nuanced, but just as effective. In the very first scene, the Duke of Venice (Marya Lowry) encourages Brabantio (Richard Snee) to temper his hatred of his daughter’s husband. The Duke advises: “And, noble signior, if virtue no delighted beauty lack, your son-in-law is far more fair than black.” Udofia updates this notion by turning it into a backhanded compliment: “If real goodness is uglynesses’ lack, your son-in-law’s more beautiful than black.” This Othello sets “othering” to the strains of iambic pentameter. It’s an uncomfortable metamorphosis and it ought to be. 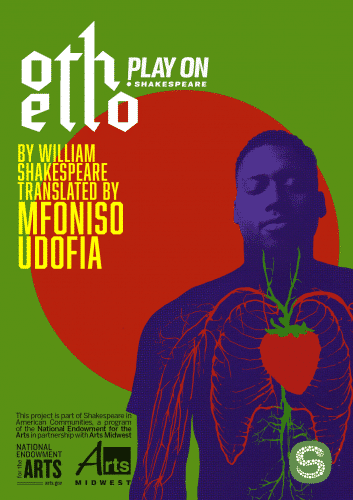 In an interview, Play On Shakespeare founder Lue Morgan Douthit explains “contrasts are the emotional roller coaster that Shakespeare rides on. And I believe if we can get into those contrasts and we’re delivering the material, everyone will get it.” Udofia and her partners dig deeply into the play’s racial darkness — with a clarity that underlines every single dig. Nothing has been changed in terms of the plot: Desdemona is smothered, a victim of her husband’s misguided jealous rage; expert plotter Iago adeptly turns the audience into a co-conspirator. What is made blatantly obvious in this adaptation is society’s dehumanization of Othello, which he internalizes. He never stood a chance to assert his humanity — despite Desdemona’s love.

The impact of Othello’s constant demeaning may be new to white people, but director (and ASP Artistic Director) Christopher V. Edwards assures us that Black people were onto the truth of the play’s view of race all along. Productions tried to sugarcoat it, downplay it, or somehow justify it in the context of those “backward Elizabethan people.”

This Actors’ Shakespeare Project reading of this fascinating script poses a number of challenges for viewers. The performances are quite uneven; each actor is caged in a Zoom box, struggling to make emotional connections with the others. Technically, the experience does not come together. There are too many distractions: for one, the use of virtual neutral backgrounds turn the actors into floating heads. So, why in the world would I recommend that you immediately sign up for this reading when it returns on April 26? Because you need to hear this play. Especially if you are white and already “know” Othello. Listen again (and again) and prepare to question old assumptions.

Have the courage to rethink staid, self-protective conclusions. That’s the message of Udofia’s script and no doubt what the staff and cast of Actors’ Shakespeare Project want to put across. These accomplished Boston-area artists have shown they can handle the Bard. It’s heartening to see that they are not resting on their laurels, but are inviting us to take in a Shakespeare who has been made shockingly reflective of our times.

David Greenham is an adjunct lecturer of Drama at the University of Maine at Augusta, and is the Executive Director of the Maine Arts Commission. He has been a theater artist and arts administrator in Maine for more than 30 years.