You are here: Home / Books / Poetry Review: Paul Celan — The Anguish of Writing in a “Damaged” Tongue

Poet Paul Celan has come to embody in person and in print the agonies of a half-century of European culture.

Memory Rose into Threshold Speech. The Collected Earlier Poetry: A Bilingual Edition by Paul Celan. Translated from the German by Pierre Joris; With Commentary by Pierre Joris and Barbara Wiedemann. Farrar, Straus and Giroux, 592 pages, $45. 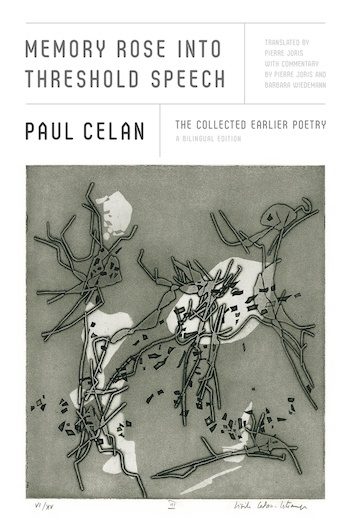 Paul Celan is one of those figures in literature known to many, and unknown to many. To those who are familiar with his life and work, anything I can write here will sound reductive; and, to those who don’t, nothing I write in this space can adequately introduce the complexity of it all. From his birth as a Jew in the “bloodlands” of what is now Romania in 1920 to his suicide in Paris in 1970, he came to embody in person and in print the agonies of a half-century of European culture.

Although Celan (born Paul Antschel) wrote also in Romanian and French, and translated poetry widely from other languages as well, his agonized wrestling with the fallen angel of the German language marks all his work. Like his contemporary Günter Grass, he grappled with the anguish of writing in a “damaged” tongue, one debased by the politics and propaganda of their time. Celan’s tactic was to exploit what is most deeply German about the language and to knot it into tight artifacts as delicate as lace and as expressive as gestures. His best known poem, “Todesfuge,” gave voice to the possibility of a poetry “after Auschwitz,” linguistic resurrection despite the devastation of death that claimed his parents and robbed him of home.

Black milk of dawn we drink you at night

we drink you at noon death is a master from Deutschland

Among others, three translators — John Felstiner, Michael Hamburger, and Pierre Joris — have made significant contributions to our understanding of Celan in English. Ironically, insinuations of plagiarism or cross-fertilization in the work of these three reflect accusations of attribution and plagiarism made against Celan in his lifetime by the widow of French-German poet Yvan Goll. While reviewing this new collection of Celan’s earlier poetry, TLS critic Mark Glanville noted that Joris “borrowed” the line “they cellar the weepings, the seepings” from Felstiner. Hamburger, too, had been taxed with relying too directly on the efforts of Felstiner, whose critical biography of Paul Celan, Poet, Survivor, Jew, remains the go-to reference point for those who want to read the poet. Perhaps it is useful and generous to regard the trio as a team, working together across time and space, to make Celan accessible in English.

Joris has been encyclopedic. He has already translated Celan’s later books, Breathturn into Timestead (2014) and now brings us Memory Rose into Threshold Speech: The Collected Earlier Poetry “as a late but necessary endeavor that would permit me to complete a translation of all of Celan’s literary works.” His introduction provides a succinct summary of the poet’s life and work and a lucid explanation of his own approach to the particular problems of putting Celan’s poetry into English. “Ever-present ambiguity — though to avoid the smell of negativity that inheres in the word ‘ambiguity,’ I prefer to call it polysemous richness — is easy enough for the knowledgeable reader to hold in mind, but difficult in most cases for the translator to resolve.”

So there is one set of difficulties for the translator. For instance, German, as a language, can do things that English, even though itself a Germanic language, can’t. Celan’s compounding of words is a formidable challenge. Break up the German into separate English words? Or keep the outlandishness of the poet’s formations and neologisms? In his introduction, Joris details the thinking behind rendering “Die Niemandsrose” as “NoOnesRose.” He is sparing in the use of the English hyphen, employing it, it seems, only when Celan has given him permission through a nearby use: “als schmucklos-schmückendes Beikraut, / als Beikraut, als Beiwort, als Beilwort, / ad- / jektivisch” takes the form of “as unadorned-adorning added weed, / as adjected-weed, as adjective-word, as axeword, / ad-jectival.”

And a “collected” volume of Celan’s poetry brings its own difficulties to the reader. The poems are not meant to be read in large batches, but discretely, one by one, like stones. (Yes, I mean to allude to Celan’s affinity for “Brother Osip” Mandelstam here.) Quantity blurs the edges. Still, the bulk is not so heavy as it appears. Bilingually presented on facing pages, the poems in English or German come to fewer than 170 pages each. The 500+ pages of Memory Rose into Threshold Speech are particularly valuable for the accompanying apparatus: notes and bibliographies, taking up nearly half the whole. The notes engage language issues, explain allusions, and provide helpful cultural context.

On the other hand, a comprehensive edition lets the reader see the sweep and growth of Celan’s voice, from the embarrassing

O flawed was night’s brigandine, the blood is seeping through the clasps!

Thus became I her smiling brother, the iron cherub of Acra

It is no longer

at times with you

into this hour. It is

Of the four original books included in this volume, the one that I keep coming back to is the third, Speechgrille (Sprachgitter), poems written in the late ’50s, many of them dedicated to the Austrian poet Ingeborg Bachmann, all of them rich with compressed allusion and expanding resonance, like “Homecoming,” bringing to mind Heine and (as Joris’s notes clarify) Kafka:

snowfall, as if you were asleep even now.

blown over here by the icewind,

Marguerite Yourcenar once wrote, “Books do not contain life, only the ashes of life.” Memory Rose into Threshold Speech keeps aflame the still glowing embers of a burning life.