Three recordings that testify to the chameleonic power of the (usually) avant-garde pianist Matthew Shipp. 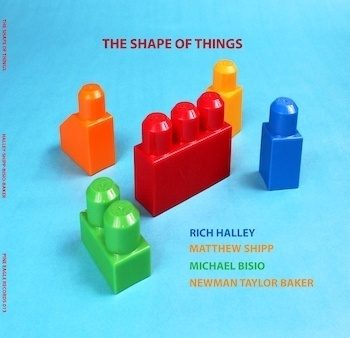 What these three sessions have in common is the presence of Matthew Shipp, a (usually) avant-garde pianist whose galvanic work as a soloist and leader of a trio has recently been praised in these pages. Here he is presented in earnest conversation as a sideman in small groups led by three saxophonists, all frequent collaborators with the pianist. They all play distinctively different versions of free jazz. With adroit ease, Shipp fits the style of each leader. It’s a remarkable achievement for the pianist and for each of the groups represented here.

Inevitably, Shipp will be compared with pianist Cecil Taylor, but to my ears he is a less compulsively energetic player. His lines have a clarity, even a transparency, that’s missing in Taylor’s brilliantly obsessive playing, with its overlapping phrases and steely underlying structure. Despite the rigor of his performances, Shipp comes off to me as thoughtful, playful, even at times gentle. The first number, or shape, in Oregon saxophonist Rich Halley’s The Shape of Things is “Tetrahedron,” which begins with a hurried three-note phrase played by Halley’s forthright and engaged — but hardly harsh — tenor. On the phrase’s third iteration, just five or six seconds into the piece, Shipp responds with an equally contained answering phrase, which he then moves up into the treble as drummer Newman Taylor Baker joins in, playing largely on rims. Gradually, both musicians release themselves from the bind of this mini-theme. But the opening continues to be referred to. Shipp takes over after three minutes and, surprisingly, the band starts to swing. Subsequently, Shipp alternates heavy chords arrayed in tense patterns with more relaxed lines. Then, around six and a half minutes in, he suddenly relaxes. It’s like watching (or hearing?) someone sink into a comfortable easy chair. The piece comes to a stop and Halley reenters with a new, softly stated theme.

“Tetrahedron” offers plenty of variety: it’s rather a pleasing adventure whose different facets are revealed in due time. Here, and on numbers like “Vector,” one admires the subtle intelligence of the interaction, as well as the vivid energy of the playing, with its implied, and sometimes explicit, swing.  I am guessing that the scientific titles refer to Halley’s other career: he has an M.S. he earned at the University of New Mexico while studying rattlesnakes. He must have taken a class in geometry somewhere along the line. Halley is a versatile saxophonist with a pleasingly husky tone on tenor — more Hank Mobley than John Coltrane. The title of his album suggests it might be a look back at Ornette Coleman’s famous The Shape of Things to Come, yet all four members of the quartet, with bassist Michael Bisio, sound happily present in the moment. These shapes have very much arrived. Bisio and drummer Baker solo on the most explosive number of the session, “The Curved Horizon,” whose title might refer to the long views of the natural world that are available in Oregon or to what is called the curved universe theory. Either way, there’s lots to admire here, from the wit of Halley’s titles, such as “Spaces Within” and “Oblique Angles,” to  his warm, immediate sound and responsiveness. 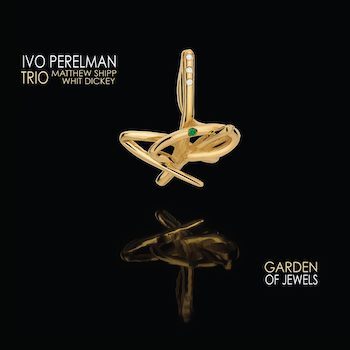 Brazilian tenor saxophonist Ivo Perelman and Shipp have a substantial history performing together. Among their many projects over the last decade are the multidisc duo sets Oneness and Efflorescence. (Perelman also made a duet record with Whit Dickey, the drummer featured here in this bassless trio.) Perelman is the Maynard Ferguson of the tenor saxophone; he can effectively play in that altissimo range. There are notes available to him that wouldn’t occur to another saxophonist, and this extended sonic territory affects his presentation, which is rarely ramrod straight. The title cut of Garden of Jewels opens with Shipp playing a soothing series of chords. Then Perelman enters as breathily as Ben Webster playing a ballad. He seems to be musing: his initial upward-thrusting phrase sounds dramatic, but it is followed by a tumbling subsidence. I hesitate to call what Shipp and Perelman do together a dialogue. It is more like they are tripping down the same yellow brick trail. They are performing in parallel with the utmost sensitivity. Almost three minutes into “Tourmaline,” after a restless opening, the two emit simultaneous staccato notes, at different pitches. They are improvising, but they are so well attuned to each other that the interplay comes off as an example of miraculous conjunction. I should also credit drummer Dickey for his myriad colors and willingness to let the two melodic instruments suggest his moves. “Onyx” begins as a kind of hushed duet between Shipp and Dickey, with Perelman sitting out. Shipp plays a phrase, stops, and waits for Dickey’s spare commentary. Then the pianist goes on. When Perelman enters, it is in the altissimo range. I am not sure what meaning Perelman attaches to the gems commemorated in his song titles: to me the music shines like gold. 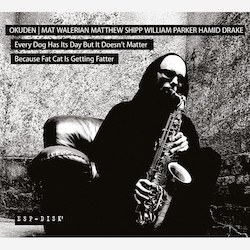 Mat Walerian, who plays clarinets and flute as well as tenor, proclaims himself to be a mostly self-taught instrumentalist — though he admits he has studied with Shipp, with whom he collaborates. Besides having the longest album title I can remember, his two-disc set  Every Dog Has Its Day But It Doesn’t Matter Because Fat Cat Is Getting Fatter is notable because of its superstar lineup, with the always estimable William Parker on bass, Shipp on piano, and Hamid Drake on percussion. They call themselves the Okuden Quartet.

The recording begins peaceably enough with “The Forest Council.” This forest is eerily quiet for most of the time. Walerian’s horns are a haunting presence — they seem to be calling from some tucked-away space (behind a tree?). The tune begins, though, with Parker’s powerful solo: he’s a wonder throughout, serving up an apposite forcefulness. Walerian (on bass clarinet) and Shipp enter after a minute and a half with the pianist contributing out-o- tempo chords and Walerian huskily sounding off in the background. Although Walerian is the titular leader, this group seems to be more of a cooperative. Despite the waggishness of its theme, “Thelonious Forever” does not openly reflect Monk’s music: it is a series of duets between Shipp and Walerian and later an encounter between Shipp and Parker. The latter is aptly at the heart of “Business with William.” The two-disc set ends with “Lesson 11,” whose silences are as impressive as the subdued notes Parker and Shipp emit at the beginning of the tune. Every Dog is full of riches: it also proffers a wonderful way to demonstrate to doubters that free jazz isn’t all sound and fury.