These superb CDs, from musicians who are doing it their own way, on their own labels, celebrate the realms below and above us: the sea and the sky. 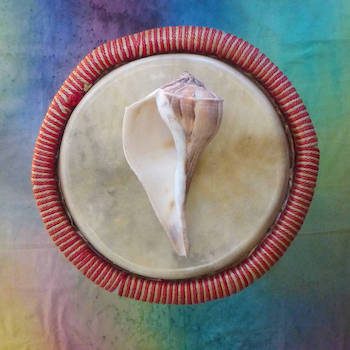 First, a salute to the musicians out there keeping it real during the pandemic. They can’t be out playing live so they are in the studio, not waiting around to be picked up by a major label. Here are two worthwhile releases from musicians who are doing it their own way, on their own labels. And they are sacrificing absolutely nothing by going it alone, from production quality to artistic vision.

These world music CDs celebrate the realms below and above us: the sea and the sky. A “littoral zone” is the shallow part of a river or lake that is adjacent to the shoreline. Julian Gerstin’s album of the same name celebrates the mollusks and shells that are often found in those areas. Todd Mosby’s Aerial Views is the third in a series of concept albums based on the elements, this one inspired by the sky.

Gerstin has an MFA in music composition and a PhD in anthropology, and Littoral Zone reflects both areas of expertise. He is a world-class percussionist who has played with musicians as diverse as Sheila Jordan, Mongo Santamaria, and Badal Roy. This album serves as a welcome showcase for him as a solo artist. With the exception of just three tracks out of the 17, Gerstin is the only musician. The instruments include an impressive range of African, Latin, South American, and who-knows-what-all-else percussion, along with espresso maker, oil can, whiskey flask, wheelbarrow, rice cooker, and Fanta bottle. (That Fanta bottle will rattle your subwoofer, trust me.)

Each track is thoughtfully multitracked for complex, layered, and interlocking rhythms. The music is never dense or crowded, and the selections have been beautifully and vividly recorded. (Note: This would be a perfect CD for testing out high-end speakers.) No matter how good your stereo system is, you’ll wish it were better so you could hear the full dynamic range and textured detail of the all-acoustic percussion (if you download it, go for the FLAC files). Crisp stereo separation is dictated by musical intention (the dialogue between the instruments and the syncopation among contrasting sounds) rather than a yen to show off special effects, as you can hear on “Janthina janthina,” “Dialogo de los caracoles rapidos,” and several other compositions.

Each track is titled after the species name of a shell, snail, octopus, or squid. It is interesting to look them up while you listen. (Pro tip: don’t look up “purpura” unless you also add “persica.”) Don’t let the detective work carry you away. As Gerstin writes in his notes, “Other than the loose fit of the names, the music is not programmatic…. the names please me, and perhaps the variety of the music evokes the crowded life of a tidepool.” Still, it’s fun, as Gerstin suggests: “The music of ‘Spriula’ spirals. ‘Janthina’ floats; its namesake snail rides the waves of a raft of bubbles. ‘Dentalium elephantium,’ or ‘elephant’s tusk,’ has a thunderous velocity.”

The CD contains a rich and stimulating variety of grooves. “Voluta musica” sounds like Cuban parade music. “Dentalium elephantum” is an African workout, recalling “The Hunt” from Mickey Hart’s groundbreaking Planet Drum album. “Purpura” is a kind of cha-cha-cha with an appealing marimba from Steve Rice. “Volva volva” has a deep Brazilian groove with some call-and-response among the independently minded instruments and the party whistle of Carnival. More cowbell!

Other tracks are less easy to pigeonhole: they cross-pollinate traditions and genres from around the world, following their own rhythmic logic, going wherever they need to go. “Spirula spirula” is a dark and mysterious track, an attempt to evoke the title’s small weird squid. A “corculum cardissa” is a lovely heart-shaped shell, and the track of that name features Anna Patton on overdubbed harmonic clarinet for a welcome infusion of gentle melody. “Grimpotheusis” is the name for the “Dumbo octopus,” a cute little critter you have to look up to believe. Its song is given a dreamy, floating vibe from the marimba while the shakers sound like night crickets or cicadas under the sea. Play it on repeat when it’s time to put the baby to sleep.

This is a great road trip CD if, like me, you’re one to bang along on the top your steering wheel and dashboard in an imaginary Interstate drum circle. It’s also perfect for those kitchen jam sessions if you’re lucky enough to have one of those stainless-steel sinks with four or five distinct percussion sounds. Littoral Zone is a delight from beginning to end, rapidly making headway as my all-time favorite solo-percussion mollusk tribute album. 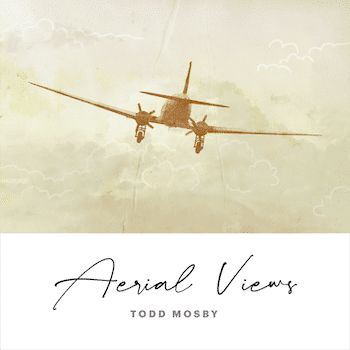 St. Louis–based Todd Mosby’s Aerial Views flies toward the pastel sunset horizon where world music meets New Age and smooth jazz. Mosby is an unusual guitarist who makes relatively conventional records. He comes from a bluegrass background, but he has studied closely with Indian sitar master Imrat Khan and learned classical North Indian technique. Mosby draws on both in his acoustic performances by playing a hybrid “Imrat guitar” he helped design, a half guitar and half semi-sitar.

“This is as brilliant a recording as I have ever been associated with,” states Will Ackerman, the founder of Windham Hill Records and producer of the CD. This is high praise from the man who essentially established the genre of New Age music. Ackerman brings his familiar Windham Hill touch to this disk, and it is as brilliantly engineered as you would expect. Ackerman doesn’t overdo it with the reverb or hissy digital sound. It’s difficult to effectively mix melodic acoustic guitar over a rich instrumental background, as Pat Metheny and Earl Klugh know well, but it is accomplished here with delicacy and immediacy.

Mosby brings a touch of bluegrass to the proceedings, so there is more folksy appeal here than you’d expect in slick New Age music. He’s not hesitant to outright strum. The guitarist also tastefully adds some fretboard and string effects that remind me of the late (and greatly missed) Windham Hill guitarist Michael Hedges.

The compositions, according to the notes, are “influenced, in part, by Mosby’s childhood co-piloting experiences with his father.” The concept “depicts a journey across the skies.” The opening track, “Gliding,” is indeed bright and airy — it exhales a cool exhilaration. “Aether” proffers a slow, gradually unfolding melody that is picked up by Premik Tubbs on soprano sax via a solo of long-held notes. “Earth & Sky” has a nice groove that includes an unexpected sonic blend of the Imrat guitar and snare drum, although I could do without the spa-soundtrack wind synth Indian flute (can’t Tubbs play a real wooden flute?). “Into Starlight” is music for the hot tub, especially when Lola Kristine enters with echoey wordless vocals. Still, a strong backbone of rhythm guitar and percussion keep it tethered to earth. A taste of Tony Levin’s melodic fretless bass arrives, but it soon becomes lost in the wordless ooh-ahh vocals and that lame wind synth Indian flute again.

Charlie Bisharat’s violin is featured on several tracks, adding some classical dignity. Other effective sonic touches are Tubbs’s lap steel guitar, Levin’s powerful fretless bass, Kristine’s George Winston–like piano, and Jeff Haynes’s consistently tasteful percussion. The sonic palette isn’t as wide here as it is on the Pat Metheny Group records, and the soloing isn’t nearly as ambitious. But there are similarities in the careful layering, airy spaciousness, and carefully arranged entrances and exits of instruments to vary textures and enhance emotional impact.

Aerial View may not be for all tastes, but it succeeds, on its own artistic terms, in evoking the beauty and clarity of the open skies. This is lovely and relaxing music. It may not be challenging music but, if you let your guard down, you might be uplifted.

Allen Michie works in higher education administration. He is a respected, if not always appreciated, car dashboard and aluminum kitchen sink percussionist at his home in Austin, Texas.