Yes, purchasing this EP will help out a good cause, but the musical value of this fabulous duo’s performance is priceless.

Esperanza Spalding and Fred Hersch: Live at the Village Vanguard — Rough Mix EP (available through the end of June from Bandcamp) 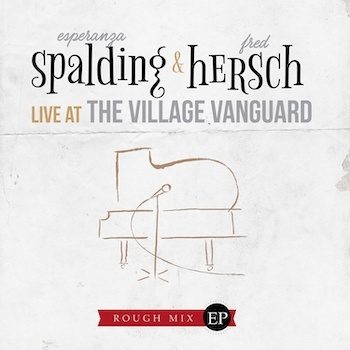 The first thing we hear from Esperanza Spalding in this set, recorded at the Village Vanguard in 2018, is an appreciative grunt during Fred Hersch’s oblique introduction to the opening number, “But Not for Me.” That sound is an early sign of how much these musicians admire each other: Hersch on piano and Spalding singing. (She is also one of the premiere bassists in jazz, but here she shows herself to be a devastatingly inventive vocalist.) Theirs is a special performance, relaxed, free, far-ranging in their improvisations, and witty. It is offered to us via what is called a “rough mix,” which means that nothing in this set has been edited. This EP is meant to support a special cause. Spalding and Hersch, both highly celebrated in the jazz world, decided to package the five numbers in this set as a benefit; the proceeds will go to the Jazz Foundation of America’s COVID-19 Musicians’ Emergency Fund.

Spalding is all-around remarkable, even in the way she handles the audience. (She blesses a guy who sneezes without dropping a beat.) Over Hersch’s rattling, spunky playing she introduces Neal Hefti’s “Girl Talk” by asking if anyone remembers the scene in Mission Impossible in which a spy says one thing to an interrogator and means another. That’s how she clues us into her version of the song: “There’s something in there, there’s something more in this song, that maybe only a select few are supposed to understand … 51 percent.” Somehow, her “Girl Talk” becomes a statement of feminist pride. At the end she gives the audience permission to practice girl talk on its own.

That approach is typical of the performance: the two make each song personal in a slightly different way. On “But Not for Me,” Spalding plays with the phrasing from the beginning, dragging out “Russian play.” Then she skips ahead to keep up with Hersch’s dazzlingly simple introduction and continues in her speaking voice: ”and then there’s some words I don’t understand.… It’s like old English. That’s how I feel confused about the whole situation.” Most of us feel confused about our situations: her humor strikes a timely nerve. Throughout the tune, even when she breaks into prose, as it were, she treats the Gershwin melody with an athletic inventiveness. Perhaps she developed this distinctive style from her bass playing: her vocals walk, or scurry, upwards and back down again. Finally, she bursts into scat. Hersch’s solo, as are his performances throughout the set, is just as remarkable. He moves a great distance from what Gershwin wrote. He is energized throughout, rhapsodic I would say — except that his most wildly varied improvisations are shaped by a kind of steely logic, an unyielding line that runs through the whole.

The marvelous relationship continues with Hersch’s “Dream of Monk,” a tribute to Thelonious Monk’s “Monk’s Dream.” The lyrics are ambiguous: the singer dreams of Monk, wondering what is going on in the master’s head. Is he crazy? Hersch’s accompaniment jumps about, barely suggesting Monk’s trademark percussiveness — yet he pays nimble tribute to the legend’s whimsical timing. The duo are at their most romantic on “Some Other Time.”  “Imagine I really thought I wouldn’t be swayed by you,” Spalding sings. But later on she assures her lover that they will take a vow of fidelity — but “not now.” This is Hersch’s most pacific solo on the disc, but the transparency of his lines are as fascinating as always. Yes, purchasing this recording will help out a good cause, but the musical value here is priceless: Fred Hersch at his best and a dazzling side of Esperanza Spalding I haven’t heard before.